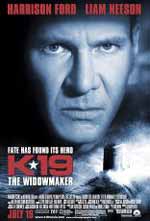 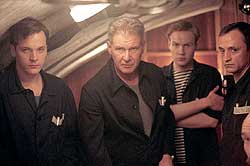 In 1961, Russia and the United States are experiencing military tension between each other, leading the Russians to deploy their nuclear K-19 under the command of Captain Mikhail Polenin (Liam Neeson). Due to problems with the ship not being finished, Kremlin official Marshal Zelentstov decides to put the more qualified Captain Alexei Vostrikov (Harrison Ford) in Polenin's place, leaving him as only an Executive Officer under Vostrikov. This doesn't sit well with the crew, especially as Vostrikov continues to run test drills to strengthen the crew's reaction time under desperate situations. Little do they know, but a lot of it will come in handy when the ship's nuclear reactor malfunctions placing the crew in highly dangerous situations that could cost the entire crew -- and others -- their lives. It's up to the hard-nosed Vostrikov and the more understanding Polenin to find a solution before the entire crew perishes.

When you think of Hollywood superstar Harrison Ford, you're likely to think of his infamous roles in the Star Wars films as mercenary Han Solo or the adventurous Indiana Jones. The last role you might imagine for Ford would not be his villainous character in What Lies Beneath, but probably his role as the Russian communist submarine captain in 2002's K-19: The Widowmaker. What may surprise you even more is Harrison Ford pulls it off, and delivers his best acting performance in almost a decade.

Since we're on a roll for surprise from K-19, let's not forget the fact that this testosterone-packed thriller was directed by none other than a woman - Kathryn Bigelow, and an amazing job she does at that. And while tensions between crewmembers heat up during the film, you might expect to hear obscenities galore (or aplenty like in last year's submarine thriller U-571), but Bigelow keeps them limited to countable on one hand. Nudity is present, however, non-sexually. In one sequence we see various crewmembers' bare rear ends as they moon an American helicopter. Later, we see a couple naked men from behind as they 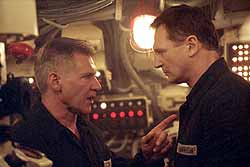 take off their clothes to be decontaminated. The film's rating is primarily earned through its "disturbing images" of crewmembers suffering from severe radiation poisoning. In this, we see frequent shots of crewmen covered in severe burns with sometimes bloody results as well. These images are indeed disturbing and not suitable for all viewers. I suggest being cautious when entertaining the idea of taking any children to this film.

With its almost 2 and a half hour length, Bigelow is able to include plenty of plot and character development to carry the story along and really allow you to get to know some of the main crewmembers of the K-19. When filming K-19, Ford was only 59 and it's amazing to see exactly how old he really looks here. With current talks circling about Ford revisiting his role as Indiana Jones withing the next 2 years or so, it's baffling how he will be able to pull it off. But Ford's stern and serious portrayal of Vostrikov is perfect and you really get to feel for the tough decisions he and Polenin have to make. Since K-19 is based on true events, it makes the struggles all that more interesting, and the peril all that more disastrous. Bigelow also makes it easy for you to forget that you're watching a story about Russian communists and the troubles they have to endure as she takes the time to flesh them out.

Not really a family film or an uplifting 2 hours of pure raw entertainment, K-19: The Widowmaker is an excellent thriller with history and a story to be told. Solid acting and suspenseful sequences propel this movie along and make it worth at least one viewing.

Sex/Nudity: In reference to radiation effecting them, a man tells another, jokingly, to wrap a piece of aluminum foil around his privates so his "torpedo" won't fall off. We see a bunch of the crewmen's bare butts as they moon a helicopter flying overhead. Later, we see the bare butts of a couple crewmen who have removed their clothes to be decontaminated.

Alcohol/Drugs: There are some toasts given during the movie. A crewmember is drunk and therefore dispelled from the ship. The crew has red wine to counteract some of the radiation poisoning.

Blood/Gore: A man is hit by a truck and we briefly see his dead body in the road with some blood on the back of his head. During a test drill, a man injures his hand with some brief bloody results while another man is struck in the head and has a substantial amount of blood on his forehead. During intense sequences where several crewmembers must enter the nuclear reactor chamber, we see them emerge covered with severe burns from the radiation all over their skin. The degrees of these burns vary from crewmember to crewmember, but are clearly unsettling images to see. We see a crewman vomit as he comes out of the room and later see another one do the same. In some cases, the radiation burns are blistering, red, discolored, and slightly bloody (in one case a man is pretty bloody and burned to the point of being unrecognizable).

Violence: A man is accidentally hit by a supply truck and dies. During test drills on the submarine, a few accidents happen that injure a couple crewmen. Some people are briefly held at gunpoint. Crewmembers are exposed to greatly harmful amounts of radiation resulting in grotesque burns that later result in death (not shown). Disclaimer: All reviews are based solely on the opinions of the reviewer. Most reviews are rated on how the reviewer enjoyed the film overall, not exclusively on content. However, if the content really affects the reviewer's opinion and experience of the film, it will definitely affect the reviewer's overall rating.