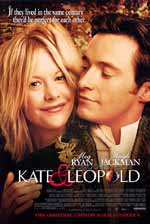 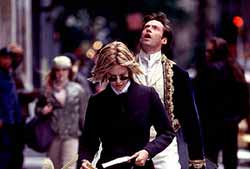 In 1876, Leopold is about to get married to someone he doesn't know. Naturally he isn't too thrilled, but when he stumbles upon a suspicious man following him around town and decides to chase him, he soon finds himself in present-day New York. Businesswoman Kate McKay has a hard time swallowing the idea that a Duke is now living in her ex-boyfriend Stuart's apartment directly above her own. After an accident leaves Stuart in the hospital and his new guest alone in his apartment in a new high-tech world for him, Kate starts to get to know Leopold. As Leopold starts falling for Kate, will she believe he's actually from the past brought to the present by her ex-boyfriend's bizarre time-travelling discovery?

When different people expect certain things from a film before seeing it, they are liable to form premature judgements about the movie before they even set foot in the theater. While one might expect a fully plausible romantic outing, another might just be looking for a little pleasant two-hour distraction from reality. 2001's Kate & Leopold requires its audience to shut reality off, grab a loved one and just enjoy two hours of fairly harmless fun. For the most part, it follows the typical romantic comedy format and makes for a pretty enjoyable viewing.

Most of the time when Meg Ryan is cast as the female lead for a romantic comedy, you know what you're going to get: a sweet, love-troubled woman who is independent but lonely and is usually caught in awkward and sometimes funny situations. Her co-star and love interest? Usually an interesting character that helps create such situations. Here we have the awkward, surreal encounter feeling of City of Angels (with a Duke from the late 1800s as opposed to an angel), meeting the fun, light-hearted feeling that You've Got Mail posed. Outcome? A fun - yet sometimes confusing - trip down Lover's Lane.

While occasional dialog may represent the way love is looked at from a current pop-culture standpoint, a more innocent overall approach is delivered by the mere presence of Hugh Jackman's Leopold. For example, while Kate's boss tries to get her to come to his place (for obvious intentions), the mere idea angers Leopold as he rebukes the boss' offer. This created a refreshing feeling of the upper classes of the past that used to exist in a less sex-centered, more proper culture. Leopold often referred to relationships as courting, a term Christians have widely tried to replace dating with. The more naive/innocent "fish out of water" feel was reminiscent of a little more matured Blast from the Past. 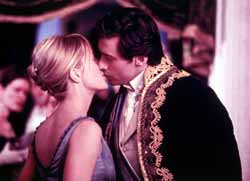 Content was rather typical for a romantic comedy. Language included 1 "f" word (when Stuart is struck by a door on an already bandaged arm). Several "s" words are present and several instances of various forms of blasphemy. Thankfully, no sex/nudity is present in the film. In one scene Leopold tucks Kate into bed and is about to leave when she asks him to stay. He climbs into bed with her, puts his arms around her, and they go to sleep with nothing else happening (both are clothed, and I doubt you're supposed to suspect that anything sexual happens). It's nice to see two characters who start falling in love not have to have premarital sex just to show their love for each other. Why, especially, do filmmakers find it necessary to show that in a movie?

I thought the overall film was pretty good and very enjoyable. A lot of Leopold's reactions to the "future" are pretty funny and Hugh Jackman does an amazing job making his character so believable. I couldn't imagine anyone else in the role or anyone else doing a better job. Our society really could use a little more 1876, not just Kate's character. Can you see a new film in a hundred years with a similar plot except the chivalrous character is from 2001? Neither can I.

Overall, I really liked the film. The frustrating thing is it could have easily been PG if the language had been left out. (I stress this in a lot of reviews, but why include such little, useless language that will limit your audience? What does it add?) As always, please read all the content details carefully.

Sex/Nudity: When Kate sees Stuart has another person in his apartment with him (she thinks it's a woman, but it's actually Leopold), he assures her he's "not getting laid." In a conversation, J.J. asks Kate if she's sleeping with Leopold (she isn't).

Alcohol/Drugs: We see some people drinking at parties and at a club. Leopold and Kate have wine together, we see Kate drinking wine, Charlie is seen with a beer several times.

Violence: Stuart sprays Leopold in the face with mace (done in a more comical fashion), when Leopold grabs ahold of Stuart who is fleeing him.