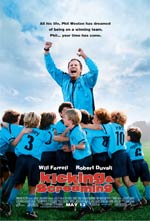 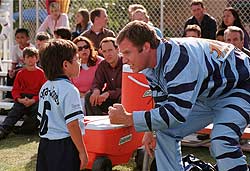 Welcome to that cutthroat, hyper-competitive, do-or-die sport of...little league soccer. At the epicenter of this overzealous world is Phil Weston (Will Ferrell), a gentle vitamin salesman who, by default, ends up coaching his sweet 10-year-old son Sam's last-place team, the Tigers. This would be tough enough for the super-supportive Phil, who truly believes it's not whether you win or lose but if your soul gets nurtured. But when he's pitted against his gung-ho, relentlessly competitive father Buck (Robert Duvall), who coaches his own young son Bucky's top-ranked team, the Gladiators, a lifetime of putting up with Buck's overbearing ways finally takes its toll on Phil and, well...the balls hit the field... (from KickingandScreamingMovie.com)

From the looks of the previews for Kicking & Screaming, you kind of get the feeling you're seeing a commercial for an extended Saturday Night Live skit. So upon viewing the actual feature-length, 95 minute film, you won't be surprised when you find it's format really isn't too far off from just that. Much of Kicking & Screaming is a rather random, screwball affair. Those familiar with Ferrell's hit Elf, or the sadly overly vulgar Anchorman, will not be surprised to find this film making sharp turns around every other corner. Those, however, who aren't used to this brand of humor will find it a rather hard pill to swallow. 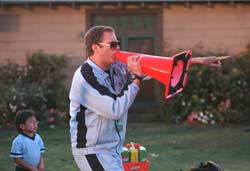 Kicking & Screaming will only really be appreciated by Ferrell enthusiasts. Will does his usual antics and quasi-angry animations in large doses here. In fact, while the soccer film is about the team Ferrell's character coaches, The Tigers, it's really all about Ferrell himself. And when we watch him slip further and further into lunacy (aided by a newfound coffee addiction and the feeling of winning), you soon realize you're rooting for a guy who's gone from underdog to jerk before too long. When he finally does, inevitably, return to his senses and realize he's been losing it, it feels rather contrived and forced. The film does, however, hold a strong theme of teamwork and family reconciliation (via father/son relationships), but comes off rather formulaic in the process. It almost feels like the film was intended to just be a random jokefest of sorts, and included the life lesson theme at the end because they felt they had to.

As far as content goes, Kicking & Screaming pushes the rating at times with its random cartoon-like violence, and some adult references - like one of the soccer kids' parents being two lesbians. The revelation of the latter causes Ferrell's Weston to awkwardly tell them they're better people because of it, which leads a straight parent to question why. Some mild language and play on words with "We've got balls" (meaning sports equipment in a sports store), along with a scene where the team's uniforms have blood all over them after helping out at a butcher shop, round out the objectionable content. While the language is mild (a few "h*ll's" and "Oh G-d's"), Phil's ridiculing of the kids on his team and the other teams is pretty heavy-handed at times. He even pushes one child to the ground in one instance. While it's all meant to be silly and funny, it may be material some kids will want to imitate on their own time, which will indeed have less than humorous results.

Kicking & Screaming is ultimately a comedy for Will Ferrell fans. Probably too heavy for the younger audiences, I suggest leaving the little ones at home. If you don't like Ferrell's antics (I usually do), you're more than likely going to hate what Kicking & Screaming has to offer. The film gets a little rough when Phil begins his tyranny of chastising the children, but it does have a redeemable ending on all accounts. Regardless, caution is advised before deciding to see Kicking & Screaming.

Sex/Nudity: Phil finds out that Byong Sun's parents are lesbian mothers and awkardly tells them they're better because they're "different," (not knowing what else to say). This upsets a straight father; Barbara starts kissing Phil on their bed but he starts crying and nothing else happens.

Alcohol/Drugs: Phil gets addicted to coffee to the point where it drives him slightly mad. Some random people drink alcohol in the film.

Blood/Gore: Phil has a black eye from Ditka accidentally punching him; We see some red welts on Phil's chest and arms after tetherball; Phil and the team have blood on their uniforms, faces, and hands, from helping Massimo and Gian Piero with their chores at the butcher shop (so they can play that day). Upon arriving on the field in this shape, the sight of it causes the opposing team to forfeit and run away. Neither bloody nor gory, we see a child eat live earthworms in two separate occasions.

Violence: Mostly cartoon-style violence; we see Phil hit multiple times with a tetherball, including the groin; Phil pushes a child to the ground; a kid jumps and tackles Phil due to his antagonizing; etc Disclaimer: All reviews are based solely on the opinions of the reviewer. Most reviews are rated on how the reviewer enjoyed the film overall, not exclusively on content. However, if the content really affects the reviewer's opinion and experience of the film, it will definitely affect the reviewer's overall rating.