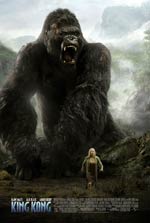 Jackson will bring his sweeping cinematic vision to the iconic story of the gigantic ape-monster captured in the wilds and brought to civilization where he meets his tragic fate. The screenplay by Jackson, Walsh and Boyens is based on the original story by Merian C. Cooper and Edgar Wallace, which became the classic 1933 RKO Radio Pictures film, directed by adventurers Cooper and Ernest B. Schoesdack. Jackson employs the latest motion picture technology to cinematically portray the timeless tale of the beast and his beauty. He expands on the chapters of the tale that take place in the mysterious and dangerous jungles of Skull Island, with his Kong aiming to be a unique and breathtaking creation...
(based on the summary from MovieWeb.com)

I grew up watching the original 1933 version of King Kong at my Grandparents' house around the holidays every year. Grandpa would put the film on for us and tell us facts about the making of the film and the ground breaking technology used in its production. The film was remade in the 70's and is seldom heard of today, but due to Lord Of The Rings Academy Award winning director Peter Jackson's love for the 1933 film, a second reinvisioning was commissioned. So can the man who helped bring Middle Earth to life recreate King Kong bigger and better?

Peter Jackon's King Kong is a bigger, longer, and clunkier version from the original. Jackson relies heavily on CGI and modern technology to retell the classic tale with drastically mixed results. Its three-hour length, unlike with Jackson's Return Of The King, is sorely unnecessary and there are plenty of moments where you feel like the film could have been shortened or cropped for time and content. With a remake, one can attempt to retell the story entirely in a new way or update the original while trying to stay as true to the story as possible and Jackson's approach falls somewhere in the middle. The film gets off on the wrong foot from the start by casting Jack Black as Carl Denham in the role that was made famous by the talented Robert Armstrong. Armstrong had such a likeable yet sleazy salesman characteristic that Black or few current actors could duplicate. Black's known for his roles in comedy and he just seems unrealistic and uncomfortable in the role. Naomi Watts and Adrien Brody, however, have just enough class and talent to make filling the shoes of Bruce Cabot and Fay Wray much more natural. Brody added more heart to his portrayal as Jack Driscoll, while Watts offered almost a completely new take on Ann Darrow's damsel-in-distress character. Although those familiar with the classic story know Denham has to live throughout the film's duration, having Jack Black in the role just made me wish Jackson would decide to invent a death for him or something. There was nothing "1933" about his portrayal, but if Jackson and Black want the audience to strongly dislike Denham, it worked for me. Armstrong at least had enough charm that you couldn't help but like him despite how much of a greedy slimeball he really was. 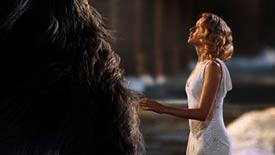 Another problem the film basked in were the special effects. While many can look upon the 30's original and scoff at how poor the effects look today in 2005, I must say I'm sorely disappointed in some of Jackson's poor excuses for special effects. While Kong himself looked brilliant in nearly every second of film he appeared on (which credit must also be given to actor Andy Serkis who, through motion capturing was able to act out and thus embody the Kong you see on screen), so many other effects fell flat. For instance, in a sequence where the crew of the Venture are running away from a herd of dinosaurs, it is so apparent that it was all done in front of a green screen that it feels you're watching a Saturday night "B" monster movie than an epic from the director of the "Best Picture" of 2004. When comparing it with the first Jurassic Park film in 1993, which contains a similar stampede sequence with this 2005 effort, it's amazing the technology isn't worlds better. In fact, every dinosaur sequence paled in comparison to those in any of the three Jurassic Park films. Perhaps all of the money was squandered on shots of the titular character Kong or the recreation of 1930's New York City, although both look marvelous. Most of what happens on the island bares a glaringly artificial feel that I couldn't shake through most of the film. Before seeing this version of Kong, I'd been certain, through the impressiveness of the LOTR films, that Jackson was the man to pull off a premium Kong remake, but I'm sure now that that's not the case.

Before I go into the film's saving graces, I must touch upon a few other drawbacks to Peter Jackson's King Kong. For one, the film needed to be a lot shorter. Every action sequence is drawn out well past its welcome and, while cutting down scenes too much can cause choppiness, like in The Mummy Returns, Jackson's Kong is prime example of what happens when not enough is cut. The opening scenes that setup the story, along with the voyage at sea, all are much longer than it has to be. While I'm an advocate for good story and character development, Jackson didn't make proper use of the screen time allotted, thus leaving many moments feeling too stretched. A few characters are overdeveloped without payoff even. A young man who serves as crew of the Venture is described as being wild with a mysterious past, hinting that maybe he'd even been found on Skull Island, but we never discover what the mystery was all about and are left hanging by the film's end. Like leaving the last few pages off a potentially good story, this character was left incomplete and without good reason. Finally, some aspects of the content seemed misplaced or overly inappropriate. While language was toned down considerably to contain just a few cuss words, religious profanity and blasphemy made up the core of the objectionable language. About a dozen uses of our Lord's name in vain are included in the film and it painfully feels especially out of place. As far as the film's violent or disturbing content is concerned, we're treated to some extensively creepy moments where the crew is attacked by enormous insects, with one person slowly and mercilessly consumed by a worm-like creature. Also, the natives of Skull Island are downright hideous, bearing all kinds of ugly piercings and ghastly appearances. When they attack the Venture crew, one person is impaled by a spear while others are violently thrown about. Such material is very inappropriate for the younger audiences and its sad Jackson felt it necessary for a could-be family film.

So what did I like about the film? Black excluded, I felt the casting was on the money. The acting was great -- especially since most had to do their acting against a green screen and imagine everything was there -- and I felt myself getting attached to even minor characters here that were so quick to become dinosaur fodder in the 30's original. Also, not all the effects were a total loss. Like I touched on earlier, Kong's appearance and New York City looked amazing. Jackson actually built a portion of 1930's New York City in New Zealand and it really helped flesh out the feeling of the time. And when Kong inevitably goes on his mainland rampage, it made for some of the best looking sequences in the film. Also, as most people are saying, the interactions between Ann and Kong were really great. While a few moments between them fell prey to sheer corniness, others were touching to say the least. Choosing to show Kong as more of a true-blue ape with feelings and personality was an interesting and unique direction for Jackson to explore. It's kind of hard to swallow this newer, CGI ape as Kong at first, but the effects crew and Serkis' acting do a great job on this new approach. And while certain action sequences went well overboard, the creativity of certain moments made the film entertaining and even breathtaking at times to watch. The film's climactic resolution looks great from start to finish. It's a shame, however, that more time and attention couldn't have been put into making the island scenes stronger.

Overall, Peter Jackon's remake of the 1933 King Kong may not be quite as disappointing as Spielberg's War Of The Worlds earlier this Summer, but it doesn't live up to its potential. Too long and too drawn out for its own good, King Kong stumbles painfully in the realm of special effects one minute and soars to new heights the next. An entertaining film in the end and a mediocre remake that should have been a lot better, King Kong may be most suitable to see on a cold snowy or rainy evening, but definitely without the kids.

Sex/Nudity: A producer asks Carl if his film will have any "boobies" in it and Carl rebukes him for even suggesting it; Ann is given the business card of a potential stage job. When she gets to the theater and discovers it's an adult show, she declines and leaves (Carl happens to be there looking for movie talent and finds her there).

Alcohol/Drugs: We see some characters drink during the film (especially Carl), but no one appears to be drunk

Blood/Gore: We briefly see a man lying dead on the floor of the venture from being attacked and killed by natives. He has some resultant blood on his face; We see a spear sticking through a man with some blood around it and a little from his mouth; A man struck with a large staff with spikes on the end has blood on his back and head; The natives of skull island are hideous in nature and appear to have various facial piercings; A few men attacked by bugs shoot them or swat at them, causing them to break into pieces; Although not bloody or gory, we see several worm-like creatures consume a man, with their mouths engulfing his arm, leg, and finally, head; After Kong fights with a T-Rex, the dinosaur has some blood on its mouth and jaw; Ann has some minor bloody scrapes on her face; A man cuts a rope and it whips back and cuts his face. We later see him with a bloody rag over his face and weeks later with a healing scratch on his face; There is some blood on Kong when he is shot by attacking airplanes.

Violence: A storm tosses a ship at sea, crashing it into some rocks, throwing its crew about; Natives attack a group of explorers, impaling one with a spear, bludgeoning another, and nearly killing others; Ann is taken from the Venture by natives (a man is seen lying dead on the ship as a result) and tied to a set of posts to offer as a sacrifice to Kong; Creatures (including insects and various dinosaurs) attack various people with many resultant deaths; Kong throws and kills several characters throughout the film, terrorizes NY City, destroys cars and a bus, etc; Kong fights several dinosaurs, killing them, and other action-related violence. Disclaimer: All reviews are based solely on the opinions of the reviewer. Most reviews are rated on how the reviewer enjoyed the film overall, not exclusively on content. However, if the content really affects the reviewer's opinion and experience of the film, it will definitely affect the reviewer's overall rating.