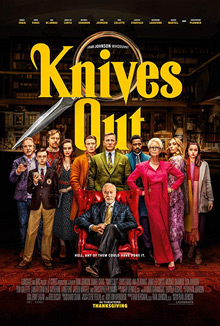 A detective investigates the death of a patriarch of an eccentric, combative family. (from IMDb) 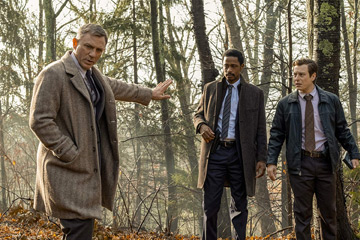 The "Whodunnit?" murder mystery is an intriguing fascination in our culture. Countless TV shows and films through the years have been dedicated to the puzzling circumstances surrounding the mysterious causes of people's death. Indie director Rian Johnson became a household name when he helmed the eighth episode of the Star Wars film franchise in 2017, The Last Jedi -- a film that has polarized fans for almost two years now. His first project following the fan-dividing super-franchise entry is the murder mystery, Knives Out, which he not only directed but also wrote himself. The film centers around how a famous, southern detective, named Benoit Blanc, is anonymously summoned to help determine the guilty party behind the possible murder of a wealthy mystery novel writer. The writer, Harlan Thrombey, leaves behind an eccentric, toxic family, who all seem to have enough reasons each to be guilty. It's up to Benoit to find the killer.

Before The Last Jedi released, I picked up a copy of his indie film, The Brothers Bloom, largely because it boasted a great cast (Mark Ruffalo, Rachel Weisz, Adrien Brody), and had a trailer that looked pretty fun. I ended up loving the movie due to its unique mix of serious moments, unexpected twists and turns, and a witty sense of humor. The Last Jedi turned out to be a bizarre mix of those as well (with Johnson's humor seeming a bit out of place for the Star Wars universe), and it later made me especially curious about how something like Knives Out would be upon hearing news of Johnson's plans for it. British actor Daniel Craig, who's most famous for playing James Bond since 2006, proved in 2017's Logan Lucky that he's not only extremely funny, but he can play a southern man bizarrely well. To no surprise, Craig's performance is one of the best things about Knives Out, delivering lines we'll no doubt be quoting for forever now. 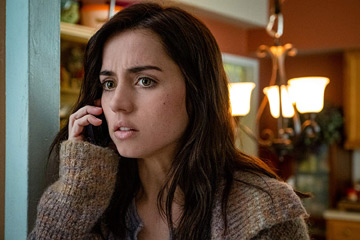 Surprisingly enough, despite the great supporting cast all around, this movie belongs to Ana de Armas. Armas plays Harlan's nurse, Marta, who may--or may not--know more about this mystery than anybody else. A lot of the story is told through her perspective, with the addition of key little insights into the other characters' lives and motives that the audience gets to be privy to to see more of the big picture. We get enough evidence along the way to generate our own opinions, and maybe even start to piece together what happened -- and that's just part of the fun of Knives Out.

The twisty-turny plot of Knives Out is just one of the highlights of the film. It's got an old-time classic movie feel to it, but set in modern times. Benoit feels lifted right out of noir film era, and if it weren't for things like smart phones, modern cars, or timely politically charged discussions, it could be a period piece. Johnson keeps the whole thing relatively tongue-in-cheek, from a passing joke where a cop remarks that the Thrombey house looks like something right out of the game Clue, to characters in the film actually watching reruns of Murder, She Wrote. Armas is an inspired choice to carry the film, too, while the rest of the cast of Thrombey's are perfectly flawed and unhinged (and given that this movie released around the Thanksgiving holiday, I'm sure more than just a few audience members can see traces of their own family in the insanity on screen). 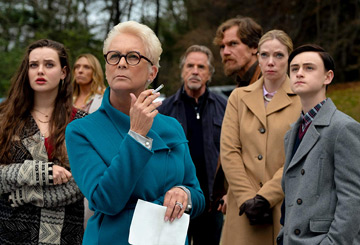 Sadly, Knives Out does not come without some major content drawbacks. The film contains 2 very prominent uses of the "F" word (and possibly a muffled third), as well as a surprising amount of blasphemy scattered throughout the film. The profanity, while mostly remaining within the PG-13 rating, is frequent and seemingly non-stop (I actually lost count). There are also a few crude references, albeit played for laughs, including a couple remarks about a teen, who is glued to social media on his phone at all times, "masturbating" in the bathroom (which he wasn't; he just was trying to escape the family insanity). And while there is no visible sexual content, references are made to one of the married men in the film cheating on his wife, and another character accuses a woman of sleeping with (well, "boinking") Harlan. Furthermore, some references to medical drugs (painkillers being called "the good stuff"), as well as marijuana were made a few times. Finally, there isn't a lot of graphic violence, but we see a man lying down with blood all over his neck and running down under his head to the floor (hours after his passing). Later, a person is found in a drugged state while slumped over in a chair (and a spider crawling on their face *shudder*). Some other violence is present, but it's not graphic or bloody.

Content aside, Knives Out is a fun and unpredictable mystery that will keep you guessing (at least to some extent) up until the film's last moments. Both funny and thrilling, it's ultimately what we can expect from Rian Johnson's non-Star Wars projects. Sadly, the content weighs this one down, as it just was not necessary for it to be so profane, therefore making it difficult to make an outright recommendation.

Alcohol/Drugs: We see people drinking at a party; Some younger people find marijuana cigarettes hidden in a clock's drawer. One of them briefly lights it, takes one puff, and then throws it away. That person is later asked if they were smoking grass; We see drugs being administered to Harlan by his nurse. He refers to one of the painkillers as "the good stuff;" Drugs are used to try to kill a person; We see a lot of empty beer bottles and a mixed drink in front of Ransom at a bar.

Blood/Gore: We see a dead man lying down with blood all over their neck and blood running down underneath them to the floor; We see a drop of blood on a person's shoe; A person's face is discolored as they fight to breathe and talk after being poisoned; A person projectile vomits into a person's face and we see chunky vomit dripping down their face; A man has a black eye

Violence: A woman finds a dead man lying down with blood all over their neck and blood running down underneath them to the floor. In shock, they fumble with their tray of food and coffee; Two men punch and grab at each other; Some characters scream in each other's faces; A building is seen after a fire had destroyed most of it. We later see someone lighting it on fire; A person accidentally mixes up drugs and panics that it will kill the person they gave them too; SPOILER: we see a person slit their own throat (the camera cuts away as the person's hand makes the cutting motion); A person finds another person slumped over a chair. They appear to be dead, with a spider crawling on their face, but then they spring to life, gasping for air and fighting to talk; A person lunges at another person with a knife; A woman punches a man in the face off screen Disclaimer: All reviews are based solely on the opinions of the reviewer. Most reviews are rated on how the reviewer enjoyed the film overall, not exclusively on content. However, if the content really affects the reviewer's opinion and experience of the film, it will definitely affect the reviewer's overall rating.