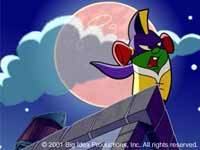 Working as the mild-mannered janitor at Bumblyburg's newspaper, The Daily Bumble, alongside editor-in-chief Bob the Tomato, cub reporter Junior Asparagus and a whole host of new veggie friends, Larry the Cucumber must put on his plungers and fly into action as super-villain Awful Alvin unleashes a swarm of Angry Eyebrows on this otherwise friendly hamlet! Can Larryboy convince the townsfolk to let go of their anger in time to stop this menace and his litany of lashes? And who will save Larryboy if he gets tangled up in Alvin's diabolical scheme?!?

Some years ago, children everywhere were introduced to VeggieTales' Larry the Cucmber and his alter ego, Larryboy. Since his debut, Larryboy has battled and overcome the fib from outerspace and the rumor weed, but his crime fighting days are far from over. In 2002, Big Idea had the grand idea of putting together the first ever VeggieTales traditional cartoon. And who's better to debut this new format than Larryboy and his own series?

In a day in age where cartoons on TV are being reduced to low budget sore excuses for cartoons (yet super popular?), it's extremely refreshing to view Larryboy: The Cartoon Adventures. With a seemingly simple thick-outlined 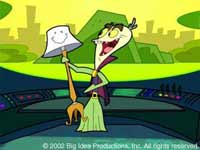 and flat animation style, Big Idea is able make everyone's favorite characters more expressive while introducing new characters into the mix, too. The premier episode, The Angry Eyebrows, is an incredibly clever show as it satirizes and pays homage to the classic super-hero like Batman. Angry Eyebrows introduces the diabolically scheming Awful Alvin and his hilariously "random" partner in crime Lampy (you gotta see it to believe it).

Angry Eyebrows is a great lesson for children in anger and forgiveness. It's fun, it's really enjoyable to watch, and it's something parents can easily watch with their kids and not feel it's too far below them to stomach. For those who pick up the DVD, you'll be treated to a bonus cartoon short featuring Larrboy, and a slew of bonus features that all add up to a great time. The Larryboy series is off to a great start and I look forward to viewing future adventures from our favorite pickle... er... I mean, cucumber!