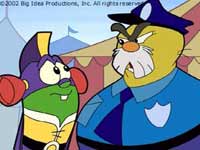 The Alchemist has returned to Bumblyburg! Along with his partner in crime and real-life mom, Mother Pearl, this crazed chemist has devised a diabolical plan to seize control of Bumblyburg and all its freedom-loving Veggie residents. Will Larryboy discover that the root of the Alchemist's cunning chemistry is his own ego? Will he realize that building himself up by knocking others down is making Bumblyburg vulnerable to the Alchemist's distorted delusions? Or is this superhero no match for his own superego?

The second installment in the new LarryBoy series continues the adventures of the caped crusader as he comes head to head with a new villain - The Alchemist! This time around, his nemesis brings along a formidable sidekick -- his mother! I thought, once again, this was a great lesson for children. Leggo My Ego! shows the dangers of tearing others down to build themselves up. Growing up I learned this lesson to be a true one that runs rampant all through adolescence. In Leggo... the Alchemist uses Larryboy's pride to tear down the esteem of those surrounding him in Bumblyburg. In the original VeggieTales series, the lessons and scriptures used to be presented to the viewer through Bob, Larry, and their computer Qwerty. In LarryBoy, the wise professor Bok Choy, from the Super-hero 101 class that LarryBoy attends, is the source of the hero's guidance as 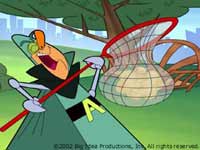 Leggo My Ego! was a worthy follow-up to the debut episode, but I couldn't help thinking it wasn't nearly as good. That is not to say I didn't enjoy it. That's hardly the fact! But the Alchemist & Mother Pearl just weren't as interesting to watch as Angry Alvin or the inanimate Lampy. Citizen Larry and his coworkers at The Daily Bumble play a much smaller role as well leaving the focus on Larrboy. Maybe I didn't like how Larryboy really didn't have much of a super-hero personality this time around (which was part of the point), and he was clueless to what Alchemist's scheming. But the premise was perfect to prove the point the story was trying to make.

So if you've got a little 'veggie head' at home who can't get enough of these lovable characters, or if you know someone who loves cartoons like Power Puff Girls or Samurai Jack, Larryboy: The Cartoon Adventures are perfect for your little aspiring super-hero!