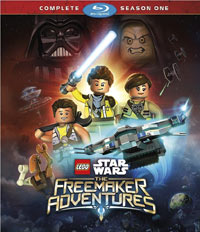 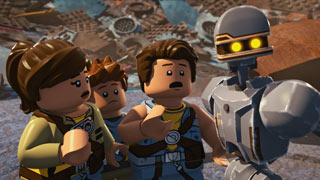 Taking place between the events of The Empire Strikes Back and Return of the Jedi, these new adventures follow a family of scavengers who build and sell starships from battle debris strewn throughout the galaxy. When their youngest discovers a natural connection with the Force through an ancient artifact – the Kyber Saber –he and his family are thrown into an epic struggle against the Empire to restore peace and freedom to the galaxy. The Freemakers explore new worlds, meet new and familiar characters and discover the strength of family. Relive all 13 action-packed episodes in LEGO Star Wars: The Freemaker Adventures Season One. (from Disney)

Disney has done anything but rest on their laurels upon purchasing Lucasfilm and the Star Wars franchise. Among new feature films, toys, and the Rebels animated TV series is another new, little-known animated television series, LEGO Star Wars: The Freemaker Adventures. LEGO Star Wars has been something frequently translated into spoof-style TV feature specials or direct-to-DVD efforts that have often been silly and nothing you'd ever dream of taking seriously. The Freemaker Adventures is something very different, however. It does get extremely silly and take many artistic liberties along the way, but it's also the first time the LEGO Star Wars brand has generated something that is somewhat canon for the Star Wars universe. 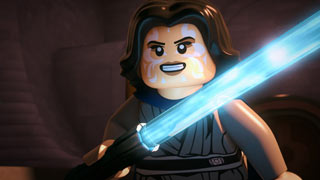 To elaborate further, The Freemaker Adventures takes place between the events of The Empire Strikes Back and Return of the Jedi, and follows an entirely new trio of characters. The Freemaker family are three kids who run a salvage and repair business at a space station called The Wheel. This first season follows a Sith named Naare who has a run-in with the Freemakers on a quest to find the most powerful weapon in the galaxy, the original Kyber Lightsaber. The lightsaber had been broken down into several pieces and scattered across the universe for safe keeping, so it wouldn't fall into the wrong hands. Rowan Freemaker, a 12-year-old boy, suddenly discovers that he's highly Force sensitive and able to locate these Kyber crystals. Naare poses as an ally to try to gain Rowan's trust and use him to locate these pieces. All 13 episodes of the first season develop this story arc until its exciting finish in the final episode.

The tone of LEGO Star Wars: The Freemaker Adventures is a bit uneven. The pilot episode opens with the Emperor as this hilarious and rather goofy personality, with Darth Vader as a similarly humorous sidekick. What's uneven about the tone is that the rest of the episodes are boughts of silliness mixed in with a sometimes serious plot. Naare is even scary at times, as she frequently has a friendly face that suddenly turns red and menacing. Also, the Emperor and Vader only make cameo appearances throughout the season, and they're easily the most fun characters to watch. But there's something certainly endearing about the Freemaker trio. The love and bond they share is really awesome. Where the Star Wars families can be a bit dysfunctional (like in Rebels), the Freemakers have unwavering support for each other. They also have their own droid friend, Roger, a former battle droid left over from the Clone Wars. This story takes the foursome across the galaxy, frequently running into familiar characters and familiar planets, including Takodana from The Force Awakens, where they meet Maz Kanata over 30 years before we do in the feature film, and places like Hoth and Cloud City, where Billy Dee Williams reprises his role as Lando. In the episode "Crossing Paths," they even work together with Luke and Leia. But all of this familiarity and galaxy-trotting begs the question, "Is this supposed to be canon?" I took to the web for an answer myself and found a satisfying response where it was described as a "paraphrasing" of canon and told as if through a child playing with LEGO Star Wars toys. And, honestly, that's a great way to describe it. 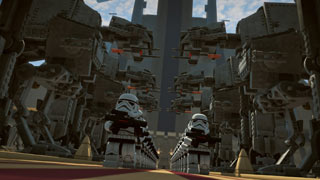 Where The Clone Wars was often dark and violent, and Rebels can go there as well, The Freemaker Adventures are a lot more kid friendly. Naare can be a little intense at times, and sometimes characters are in serious, life-threatening danger, but for the most part, the series is rather light and, obviously, told through the use of animated LEGO figures and building blocks. That in itself feels like one big gag.

I've grown to really enjoy the newer Rebels series, and LEGO Star Wars: The Freemaker Adventures definitely has its merits, but I realized, even as a diehard Star Wars fan, that I'm just not the intended audience for a series like this. It is a fun watch and I found myself enjoying some episodes over others--and I did get a kick out of all of the callbacks to the films--but the uneven tone of the series (I'd rather it go full-on silly or full-on serious than frequently jumping back and forth between the two) hindered it some for me. Still, I do look forward to watching these with my own six-year-old son... and, more than me, I think he is who these cartoons were made for.


LEGO Star Wars: The Freemaker Adventures is available in on DVD, in a 2-disc Blu-Ray set or from your usual digital video providers. In addition to 13 23-minute episodes are the following, rather pitiful, bonus features:

Freemaker Salvage and Repair (1:02) is a one-minute mock commercial for the Freemaker family business.