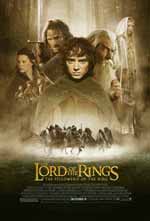 An ancient ring thought lost for centuries has been found, and through a strange twist in fate has been given to a small Hobbit named Frodo. When a wizard named Gandalf discovers the ring is in fact the One Ring of the Dark Lord Sauron, Frodo must make an epic quest to the Cracks of Doom in order to destroy it and keep it from being used for evil. Frodo is joined by Gandalf, Legolas the elf, Gimli the Dwarf, Aragorn (Strider), Boromir and his three Hobbit friends Merry, Pippin and Samwise. Through mountains, snow, darkness, forests, rivers and plains, facing evil and danger at every corner the Fellowship of the Ring must go. Their quest to destroy the One Ring is the only hope for the end of the Dark Lords reign...

This movie is a little trickier than most to review. Now before I start, please understand this review is strictly my opinion, not fact. The Lord of the Rings is a touchy subject because it is a series of stories written by Christian author J.R. Tolkien. I've heard he wrote them for his son while in WWII to encourage him to stand up for the country and fight against the enemy. But the LOTR trilogy hardly has any Christian elements to it. It's a fantasy story involving pure evil characters and good-spirited man who want to destroy evil but are sometimes tempted by the evil. The "one ring" is the creation by a purely evil character who poured an unbelievable amount of power and evil into a single gold ring. Now the way the story narrates and explains the background of the ring, it appears the ring has a mind of its own. The story begins when a hobbit named Bilbo acquires this ring and is given long life where he doesn't even age. He becomes obsessed with the ring, and with the persuasion of a good wizard named Gandalf, he turns it over to the possession of a young hobbit named Frodo. Gandalf soon realizes this ring is "the" one ring that if acquired by the evil Dark Lord Sauron could bring about a chain of horrific events and could allow Sauron to rule the world with his evil forces. It is then up to Frodo to take the ring to the place where it was made and destroy it before Sauron can get it. The rest is a chain of events that leads up to an unsatisfying ending that will only make most viewers frustrated and anxious to see the next two films.

From reading that, some Christians will already feel uneasy with the magic and the evil side of it, as do I. After seeing the film, I didn't find that I personally had a problem with the film, but I can easily see how other Christians might, and that it is completely understandable. This is absolutely far from a family film, folks. DON'T take your kids to it. The part I liked least of all about this movie was the demonic looking villains and monsters in this flick that will rival many monster films. (For example, the orcs? Take the pygmy mummies from The Mummy Returns, blow them up to full size, and then make them as hideous and grotesque as possible, then you might be close to what they look like. And that's just the orcs). The dark riders on horseback are creepy as well, reminiscent of the headless horseman from the Sleepy Hollow classic story, except multiply the number by 6 or so and pull a hood over their heads to add a little mystery and eerie-ness to their aura. Let's not forget the screeching screams they let out. What I did like about the movie is while these horrible, hideous, and down-right evil creatures were present, there was always a good side to root for to overcome these forces. 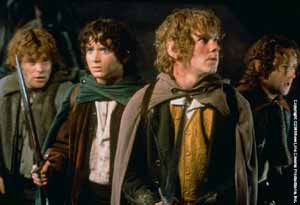 I can't recommend Lord of the Rings: The Fellowship of the Ring due to its strong questionable and unsettling material. By the way, one of the most unsettling images came unexpectedly when mid-way through the film as Bilbo gives Frodo some chain mail to wear, he sees that Frodo has the ring, and as he suddenly gets emotional about seeing it, his face briefly distorts into a hideous frightening image as he tries to take the ring from Frodo. He then backs off and apologizes. The thing that I liked so much about the film was its unusual and original storyline, interesting characters, and exciting visuals. There's nothing about the evil in this film to like, whereas often in films you can find a villain likable to a degree. Here, there's absolutely positively nothing at all to like. You just want the good guys to win. And true to the Christian walk, there's absolutely zero to like about Satan or his minions. We know Jesus is the only one to root for, and we know He's already won.

Delving more into content, there's violence present in battles between the heroes and evil Orcs and horsemen, as well as other troll/demonic-like creatures. We see a lot of non-gory battles with mainly good prevailing, and we see numerous Orcs hit in the head with arrows, etc which usually for me would be unwatchable, but given their barely human representations, just doesn't seem as gross. Same goes for an extremely hideous character that is at one point decapitated. I actually felt relieved I just didn't have to look at its face anymore. Other violence includes a little bit of blood when a man accidentally cuts his finger while holding a broken sword. Frodo has a slightly bloody wound on his shoulder, and when a character is hit with many arrows, we see a little bit of blood around where they have entered his body. There is no sex/nudity and no language. But please be strongly cautioned before even considering going or taking someone with you. I suggest reading up on the movie or talking to someone you know who's opinion you trust before seeing it. For those who don't mind fantasy, it might be okay, but for most, I suggest strong caution.

Overall, I really liked the originality of the film, the characters and the interesting story, but due to hideous monsters and unsettling evil that the heroes must face, I cannot recommend it. This review is moreso an overview and not a recommendation. Please read all the content details carefully. - John DiBiase (reviewed: 1/3/02)

Blood/Gore: A character slices an armor-covered hand off of a large creature, with it's brittle stone-like fingers falling to the ground. The result is neither bloody nor gory. As Saruman and Gandalf battle with their magical staffs throwing each other around a room, they acquire some bloody cuts and scrapes. We briefly see a discolored, non-gory sword wound in Frodo's shoulder. Arwen gets a scrape on her face from a tree branch. Boromir pics up an old sword and accidentally draws blood when touching his finger to it. We see numerous skeletons and dead bodies in a mine shaft from being killed years earlier. After a fight, Boromir has some blood on his face. As a character is hit with several arrows, we see that the wounds are slightly bloody. Aragorn's face is bloody after a battle. He then battles a creature and ends up decapitating it (with a little bit of what looked like black blood squirting out). We see a lot of Orcs hit with arrows, decapitated, cut, stabbed, etc.

Violence: Extreme. Various battle sequences, characters fight with swords, arrows, etc, other assorted violence. Disclaimer: All reviews are based solely on the opinions of the reviewer. Most reviews are rated on how the reviewer enjoyed the film overall, not exclusively on content. However, if the content really affects the reviewer's opinion and experience of the film, it will definitely affect the reviewer's overall rating.