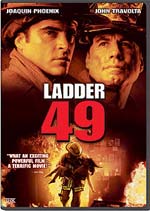 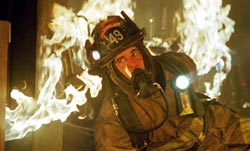 Trapped in a fire that looks likely to kill him, a fireman (Phoenix) takes the opportunity to look back over his life, career and marriage, while he waits for his company, Ladder 49, to rescue him... (from MovieWeb.com)

America's view of firefighters changed dramatically after the events of September 11, 2001. Anyone who had heard the heroic and tragic tales of what those men had done that horrific day or had come in direct contact with them will never forget. Ladder 49 is a film that seeks out to paint a realistic and tangible picture of the experiences of an everyday firefighter.

The film follows the life of Jack Morrison, brilliantly embodied by Joaquin Phoenix, as we see him on his first day as a firefighter till over a decade into his career. The movie opens with Morrison on the job and the filmmakers utilize flashbacks to tell backstory on how Jack became a firefighter, met his wife, and lost fellow firefighter buddies on the job. The movie pulls at the heartstrings from beginning till the end in what many dub a melodramatic affair. While Ladder 49 lays the drama on real thick, it's necessary for such a film. Director Jay Russell purposefully wants us to get attached to these characters and attached we most certainly get. We hurt when the characters hurt and we laugh along with them when the guys play pranks on each other and have a good time. 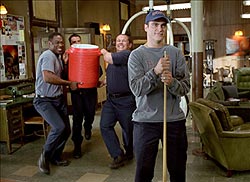 The acting and script are top-notch in Ladder 49. Phoenix is perfect as Jack Morrison and John Travolta turns in a great role as the captain of the firehouse. Each character is fleshed out nicely, molding these bunch of guys into real, tangible people. Some you're made to love, others to almost hate, but the screenwriters do a fine job making these guys believable.

Content isn't the worst out there, but this is most certainly more an adult-themed film. Some of the pranks the guys play on each other include faking a confessional session from a priest in which the firefighters grill the rookie on their sex life and tease them about it. Other subtle or lighthearted jokes are made but none is intended to be or is very explicit. Other sexual content just implies an encounter between Linda and Jack, but we just see them talking in bed one morning.

Language doesn't run too rampant through the film but is indeed objectionable. It includes 1 "f" word, a handful of "s" words and a list of other colorful phrases. Graphic violence is thankfully limited to a few cuts and bruises and one significant incident where we see a character's face scalded and scarred from a severe steam burn. Overall, it's not a film you would probably want to take the family to. It's a pretty heavy film thematically, although, at the same time, addresses an important subject matter of that of the life of a firefighter.

I enjoyed Ladder 49, but it's overall not a very uplifting film. It's mostly realistic but does lay the melodrama on thick to tug at the viewer's emotions. That itself didn't bother me, but it will not be appreciated by some. Thematically not a family film, Ladder 49 does bear an importance in educating some viewers on the lives of such real-life heroes as firefighters. But please take the film's content into consideration before deciding to see it.

Sex/Nudity: Some references in dialog (mostly played for humor) are made; We see Jack and Linda in bed one morning with her under the covers and him climbing back in bed with his shirt off. They passionately kiss, but we see nothing else

Alcohol/Drugs: A lot of scenes involving drinking at bars for fun and taking bets; We see drinks at a wedding; Jack and Lenny fight when intoxicated; etc

Blood/Gore: Jack has some blood on his face following a fall; A firefighter is severely burned in the face from scalding hot steam. We later see his face all scarred and deformed from it (with stitches in his face from skin grafting); Jack has a little blood on his head after saving a man from a fire.

Violence: Mostly just fire-fighting related violence; A man falls a great distance and is injured; Jack attacks Lenny when he makes inconsiderate remarks about a fellow firefighter's death; Jack attacks Lenny, however, when he makes a joke about his wife; etc Disclaimer: All reviews are based solely on the opinions of the reviewer. Most reviews are rated on how the reviewer enjoyed the film overall, not exclusively on content. However, if the content really affects the reviewer's opinion and experience of the film, it will definitely affect the reviewer's overall rating.