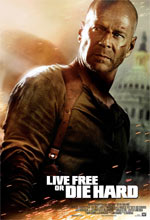 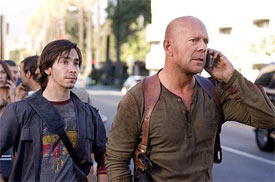 An attack on the vulnerable United States computer infrastructure begins to shut down the entire nation. The mysterious figure behind the shattering scheme has figured out every digital angle - but he never figured on an old-fashioned, "analog" fly-in-the-ointment: John McClane. (from MovieWeb.com)

It's only fair that I preface this review by stating that I've never seen any of the previous Die Hard installments. As someone who's not a fan of pervasive language or especially graphic violence, I can't say the other Die Hards are my cup of tea. But as an action film fan and someone who has enjoyed Bruce Willis films from 16 Blocks and Sixth Sense to Over The Hedge and The Kid, I was interested in experiencing Willis' signature character of John McClane for the first time.

Now, I'm not completely ignorant of Die Hard films. I've seen quite a bit of the first one on TV before (the overdubs are especially entertaining), and what's interesting about this PG-13 rendition of Die Hard 4 (aka Live Free or Die Hard), is it has elements of a bad TV editing job throughout its entirety. It's pretty evident that the film was cut down from an originally intended R rating to commercially appeal to a wider audience with a PG-13 theatrical release. In many instances, you can see Willis' McClane and his computer hacking costar played by Justin Long mouth words that don't match the dialog layered over top of the film. In other instances, the dialog or film itself even seems slightly choppy. While I prefer this to a profanity-laden film (and that's not to say this one didn't have constant PG-13 type swearing), I did expect better film edits. 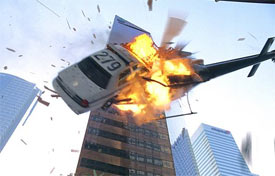 With editing aside for the time being, Live Free Or Die Hard is an action thrill ride like few that seem to make it to the big screen anymore. Willis' McClane is a rough, tough, and ultimately intimidating action hero who is able to take a licking and keep on ticking. Director Len Wiseman doesn't hesitate to lay the action on thick -- even if it means taking things way, way over the top at times. Sure it's an amazing visual to know when you're watching a patrol car get launched into a helicopter that they actually did that, but c'mon, how realistic is it? But then again, who cares? It's entertainment, not reality. Going into watching the film expecting just a cool popcorn flick with lots of action and things blowing up, you won't be disappointed. But whether or not McClane is supposed to be a borderline superhero in his ability to bring down terrorism by being seemingly unstoppable, I don't know. Taking Willis' age into consideration, McClane's feats are nothing short of extraordinary, but things never get dull or boring -- and you never stop rooting for this NYPD detective. This is an action movie in every way, so viewers shouldn't expect any less... or any more for that matter.

For a movie of its kind, I found the plot to be pretty strong. It falls in line with the over-the-top action by bringing a digital threat to life here in America - where the entire nation is demobilized by a group of computer hackers. Timothy Olyphant is okay as the film's central villain, feeling a little cliche in his role at times, but serving as a relatively worthy adversary for McClane. Justin Long, who I first saw in 1998's Galaxy Quest is quite good as a computer hacker McClane is assigned to protect. After seeing him in that more innocent role, as well as his contribution to Dodgeball, it's rather an adjustment to see him cursing like a sailor (with plenty of overdubs as well) here. Nevertheless, Long fits the nervous computer geek personality perfectly and he ends up being a good match for Willis. 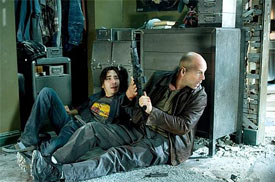 As you can imagine, however, the content for Live Free Or Die Hard is pretty extreme for the PG-13 tag. Just knowing it was edited down from an R rating should give you an idea of the feel this movie has. The violence is intense, but seldom graphic. When characters are shot, the camera never lingers long enough for there to be much blood - with McClane being the only exception of looking bloodier and bloodier as the film progresses. Language is just about anything but all "f" words, with just one included (albeit slightly drowned out by a gunshot, but still audible). Roughly 30 "s" words are included, with plenty of blasphemy to sting the ears and an array of other colorful phrases. Sexual content is limited to a scene in the beginning of the film showing McClane breaking up a makeout session of his daughter with her boyfriend. All in all, the film has enough junk to send up the red flags and make it unrecommendable.

As an action film, Live Free Or Die Hard delivers. Willis is great as John McClane, but die hard Die Hard fans may be split over whether or not he's TOO much of an action hero here to be believable. Lack of realism aside, it's a thrill ride popcorn flick indeed. Sadly, heaps of language and plenty of shootings, beatings, and killing keep this from being worthy of recommendation. It'd be great to have more action-filled films like this one, and even Transformers, stripped of some more of the abrasive adult content that people think they want. And while the editing of an R film to PG-13 for theaters does say something, it's still not enough. So don't be mislead by the slightly more friendly rating. But since it's still highly entertaining, perhaps waiting for TV for this one, or an editor like ClearPlay may be your best bet.

Sex/Nudity: We Lucy in the car making out with a guy and he reaches into her jacket and gropes her chest. She stops him and tells him and McClane pulls him out of the car; Matthew sends a virus to someone and we see a series of pop-ups for singles and Viagra (but nothing explicit is seen)

Violence: An immense amount of violence -- lots of shooting, punching, kicking, explosions, etc. Cars crash in a tunnel, with some getting airborn, a car is thrown into a helicopter, crashing it, A person falls down an elevator shaft to their death, a person dies when trapped in a car that blows up at the bottom of an elevator shaft, random people are shot and killed (good and bad), a man falls out a window onto a car, killing them, a couple people are hit by a car, etc... Disclaimer: All reviews are based solely on the opinions of the reviewer. Most reviews are rated on how the reviewer enjoyed the film overall, not exclusively on content. However, if the content really affects the reviewer's opinion and experience of the film, it will definitely affect the reviewer's overall rating.