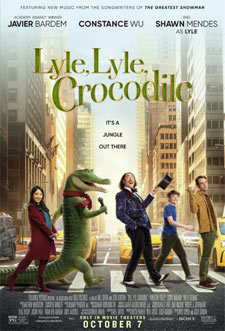 Feature film based on the children's book about a singing crocodile that lives in New York City. (adapted from IMDB)

Lyle Lyle the Crocodile was a 1965 children's book that is the latest children's story to get the big screen movie treatment. I'm actually not familiar with the book, but the film, slightly shortened to just Lyle, Lyle, Crocodile, centers around a showman named Hector who discovers a singing crocodile and hopes to train him to be in his stage act. Sadly, Lyle -- the crocodile -- freezes with stage fright when given the opportunity to perform, leaving Hector penniless and in need to tour to make ends meet, so he abandons Lyle in his New York brownstone to fend for himself. About a year and a half later, the Primm family moves into the home and discovers this amazing creature living in their attic, and their lives are never the same. 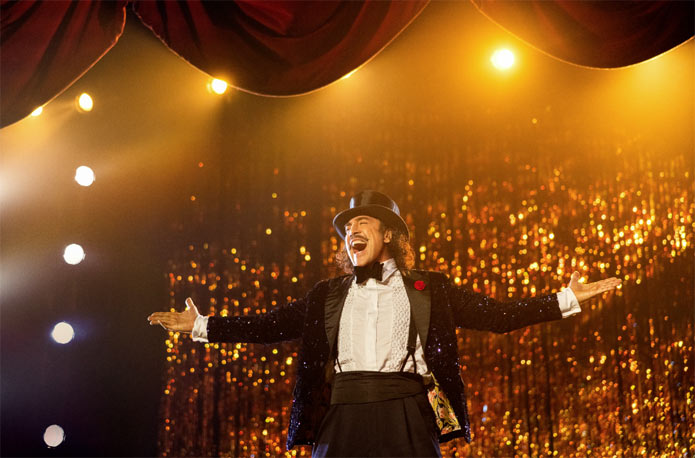 To be candid, nothing about the film's trailer made me want to see this one, but my 12-year-old son was immediately hooked. Sure enough, after seeing the movie at the local drive-in opening weekend (the fact that my favorite movie, 1984's Ghostbusters was the second feature sold me to see Lyle right away. Ha!), my son confirmed that he absolutely loved the movie. My wife and I were also pleasantly surprised with what we experienced.

Javier Bardem is fantastic as the over-the-top performer, Hector, who discovers and raises Lyle, but ultimately abandons him to live alone. The Primm family consists of Constance Wu as Mrs. Primm, Scoot McNairy as Mr. Primm, and Winslow Fegley as Josh Primm. Each of the main characters turn in pretty solid performances, even with the story taking totally outrageous or goofy turns (crocodile wrestling, anyone?). Singer Shawn Mendes performs all of Lyle's singing, and he's got a great voice, but his style is no doubt an acquired taste; I myself wouldn't call myself a fan of the singer. Still, Lyle, Lyle, Crocodile is an adorable and heartwarming film that sometimes falls prey to the usual shtick found in these kinds of family films, but has enough heart and laughs to make the experience for the parents enjoyable enough. I found the first two-thirds of the movie to be quite whimsical and upbeat, with the last act turning surprisingly sad and overlong in the process. By the film's end, its hour-and-forty-five-minute runtime felt more like over two hours, and I was looking forward to seeing the credits roll. Still, I've certainly seen worse family films, and the overall feeling I gleaned from Lyle, Lyle, Crocodile is that it's a pretty wholesome and entertaining family movie.

The content for Lyle, Lyle, Crocodile is quite clean. I counted about three uses of "Oh my G-d," with that being the full extent of any language in the movie. The violence is mostly light and comedic, although Josh is confronted by a thug on the city streets who threatens to rob him of his cell phone before Lyle shows up to scare the punk away. There is no sexual content in the movie, but when Mr. Primm notices his wife is a lot happier than usual (from meeting Lyle, unbeknownst to Mr. Primm), he awkwardly asks her if there's someone else in her life (suggesting an affair). However, it's done in a subtle way and she quickly shuts the suggestion down. Lastly, there's talk about how Josh's mom (Mr. Primm's first wife) passed away when he was younger, but it isn't dwelled upon. However, anyone sensitive to the loss of a parent might want to know about that plot point ahead of time.

While Bardem certainly steals the movie with his flamboyant performance, and Stranger Things' Brett Gelman is an amusing quasi-villain as Mr. Grumps (that name is a bit on the nose, isn't it?), my concerns from the trailer about Winslow Fegley's seemingly awkward performance weren't entirely realized -- which is a good thing. However, Winslow does overdo his performance at times and rides the line of being cheesy, but he wasn't nearly as bad as I originally feared and even does a fairly convincing job at times. Crazy Rich Asians' Constance Wu is also lovable as Josh's stepmom, and her musical number with Lyle - although really over the top and kind of crazy - is a delightful surprise. 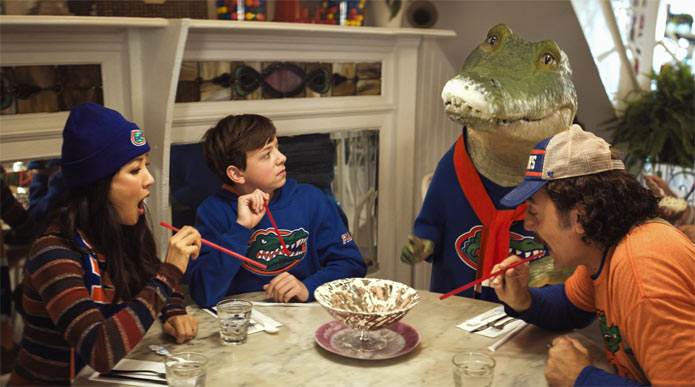 I'd also be remiss if I didn't acknowledge the animation in this movie. The CG animation for Lyle, and the detail in his character's design, is truly impressive. The cat, Loretta, is also mostly animated, and it's usually done so well that it's really hard to tell when we're seeing a real cat or an animated one. We've definitely come a long way with feline animation since 2004's Garfield the Movie. (Ha!)

When all is said and done, Lyle, Lyle, Crocodile is one of the better live action family films I've seen in a while. It's certainly not perfect, but it's quite enjoyable and mostly light fantastical fun. I can't see myself revisiting the movie on my own, but it's a nice option for future family movie nights.

Sex/Nudity: Mr. Primm notices Mrs. Primm is much happier than she's been in a while, and he awkwardly asks if there's someone else in her life (meaning she's having an affair). She isn't, though; We see Lyle reclining on a couch as Mrs. Primm paints him in a cartoon fashion on a canvas (in a scene that playfully references the drawing scene from Titanic)

Alcohol/Drugs: Hector is often seen having a drink; Hector and Lyle have drinks together.

Violence: Lyle swallows Loretta the cat. Josh then chases him off his house's rooftop through the city streets. A taxi almost hits Josh at one point; A homeless looking thug on the street menacingly approaches Josh and demands he gives him his cell phone. Lyle then roars and scares the man away. He also then spits up Loretta; Mrs. Primm freaks out when she sees Lyle and runs away, grabbing Josh to pull him to safety. Later she approaches the bathroom where Lyle is bathing and singing with a broomstick in hand; When Mr. Primm meets Lyle, he also panics and tries to get the family out of the house; Lyle playfully tackles Hector; Lyle breaks Mr. Primm's framed wrestling jersey and tosses the shirt at him. We then see Mr. Primm suited up in his old uniform as he and Lyle wrestle in the attic; We see Josh in gym class wrestling; A car drives by and throws Hector out the back of the car onto the street; Lyle is shot with a tranquilizer dart and falls over; Some normal crocodiles slowly approach Hector in the crocodile pen at the zoo, threatening to attack him. Lyle saves him right before one attacks him; Hector trips a security guard with what looks like ball bearings from his sleeve; Lyle crashes a motorcycle sidecar; Mr. Primm tackles Mr. Grumps. Disclaimer: All reviews are based solely on the opinions of the reviewer. Most reviews are rated on how the reviewer enjoyed the film overall, not exclusively on content. However, if the content really affects the reviewer's opinion and experience of the film, it will definitely affect the reviewer's overall rating.