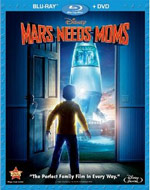 Nine-year-old Milo (Seth Green) finds out just how much he needs his mom (Joan Cusack) when shes nabbed by Martians who plan to steal her mom-ness for their own young. Produced by the team behind Disneys A Christmas Carol and The Polar Express, Mars Needs Moms showcases Milos quest to save his moma wild adventure in Disney Digital 3D and IMAX® 3D that involves stowing away on a spaceship, navigating an elaborate, multi-level planet and taking on the alien nation and their leader (Mindy Sterling). With the help of a tech-savvy, underground earthman named Gribble (Dan Fogler) and a rebel Martian girl called Ki (Elisabeth Harnois), Milo just might find his way back to his momin more ways than one. (from MovieWeb.com)

From the director of films like The Prince of Egypt and the 2002 remake of The Time Machines comes the film adaptation of the 2007 childrens book, Mars Needs Moms, written by Berkeley Breathed. While that book was very expressively illustrated - with a distinct catroony style - director Simon Wells, in partnership with Disney, have opted for a more realistic looking approach to both the aliens and the humans. Since I haven't read the book myself, I can't say how faithful the film is to it, but the movie ends up being more of a mixed bag than it probably could have been.

Mars Needs Moms was filmed using the same technology that was used to make the 2009 animated adaptation of A Christmas Carol. Real actors wore motion capture suits and dots on their faces, along with helmets with cameras mounted on them to record the actors' performances. In this case, we have comedian Seth Green, who is an adult but plays a 9-year-old boy named Milo in the movie (who looks remarkably like him), while Joan Cusack embodies his mother and Dan Fogler plays the only other human on Mars, Gribble. All of the voice performances are excellent and the motion capture technology does well to animate the actors' performances well, however, the animation used to make the characters look real seems uneven. At times, the animation is spot-on, especially in Gribble's case, but other times, the faces look too rubbery or fake while the human body movements are much too slow and synthetic. Also, the Martians are pretty creepy looking. As you watch the movie, you adjust to Ki, the female Martian who has the kindest spirit of the Martians, but it's the evil and manipulative "Supervisor" who is pretty dang creepy. It doesn't help that they make her look like a walking villainous prune either. I remember seeing the previews for the movie and feeling like the animation was stuck between abstract and realism, but not quite surrealism, and therefore it seemed more eerie looking than anything. You do get used to the style somewhat while watching it, thought. I guess you can pretty much expect the look to be The Polar Express set in space.

Another weird vibe the film gives off is that Gribble talks like he's stuck in the 80s while Ki is almost fully a jive-talking hippie (she learns english from a 70s show the planet tapped into). With Ki spouting frequent slang she learned from the television, and Gribble's 80s references, it really reminded me of the alien Wak from the 1985 film Explorers. So with the bizarre animation feel and that retro feel, the movie was a bit of a throwback to the 80s sci-fi films for kids. For the most part, this story is pretty accessible for families and young ones, but there are a few intense emotional moments, and some death or near-death experiences, that may be a bit heavy for some. Weaved throughout this story, however, is a very strong pro-family theme. Basically, the Martians need good mothers to help program "nanny bots" to take care of their own young. And since Milo's mom is such a great mother, she becomes the next abduction and Milo finds himself inside a spaceship when he goes to rescue her. By film's end, Milo has a renewed love and appreciation for his mom, and it's likely that you will too for yours. 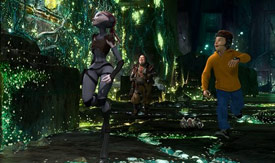 The content itself is very mild. There is some action sci-fi violence, but it's primarily just the Martians shooting at Milo and Gribble, without it every causing any harm. There is a scene where we see a wall with the outline of a Martian on it, made up of the soot from them being blasted by a firing squad; a character nearly meets their end there. In another scene, a couple characters nearly suffocate to death in space, but thankfully are rescued before it happens. However, in this sequence, it's pretty intense emotionally. Otherwise, just the dark and occasionally creepy nature of the film is the only other possible concern. It's not as light and colorful or bubbly as your typical animated film, but it does have its thematical merits.

All in all, whether it was the animation style chosen or the overall bizarre nature of the film, there was something a little lacking about Mars Needs Moms. Still, I found myself drawn in before the film's end and children especially may feel that way too. It's not the best animated film of the year, but I suppose you could still do worse. Fans of space stories, aliens, and action adventure films will probably really enjoy Mars Needs Moms.

Life On Mars - Just like with last year's Blu-Ray release of A Christmas Carol, this Blu-Ray disc includes the whole film shown as picture-in-picture with the motion capture live action footage and the film's feature-length animation. Not everyone's going to want to check it out, but the end credits of the movie give you a taste of what it looked like and it's fun to see how the actors acted out their roles with little to no real props to work with. When you watch the full movie in this mode, you'll actually hear all of Milo's dialog presented in Seth Green's adult voice. In the finished film, his voice has been altered to sound like that of a little boy, but not in this particular viewing mode. It's a little weird, but neat to hear the original recording unchanged.

Deleted Scenes (28:31) - There are six deleted scenes and an extended opening. As director Simon Wells specifies in an introduction, they had decided to shorten the opening as not to give the film a more dark introduction by showing a Martian infant handler rejecting a baby. The footage in the opening is very rough, but at least not just shown in storyboard form.

The first of the deleted scenes is an extended sequence where Milo's mom tricks him into digging a trench for a row of flowers after he used her flower bed for an area to play in. It's a cute scene between the two of them, but I agree it made sense to cut it (and Seth Green had Milo saying "suck" in an inappropriate way for a Disney film like this one, so it was a wise edit). The second scene is an extended version of Milo meeting Gribble. It has more dialog (including Gribble saying "dumb *ss" and "lame *ss?!"). The third sequence is a brief one as Gribble and Milo go across a bridge from one part of Gribble's place to the other. As Wells explains, it was just cut for time. Next is an alternate version of when Milo convinces Gribble to help him save his mom. It's darker and much more confrontational. The final film's version is much, much better. The next sequence is a montage of moments from Gribble's flashback of him growing up on Mars. It was never fully animated, so it's mostly just Dan Fogler acting in the motion capture studio with next to nothing to serve as props around him. It wasn't needed, but it's impressive to watch Fogler's performance. The last deleted scene is a really long sequence where Ki, Gribble and Milo infiltrate a monorail to get to the Martian prison cell. It's decent action, but wasn't needed for the movie.

Martian 101 - This short featurette focuses on the alien language the Martians speak in the film and how the filmmakers created it especially for this movie. It's neat to see how much thought went into it and even the continuity they stuck to to make sure it was consistent throughout.

Fun With Seth is a short video that shows Seth Green goofing off on set in his motion capture suit. It's obvious everyone had a blast while making this movie and this video shows it.

While there aren't a ton of extras on the release of Mars Needs Moms, what's included is pretty good. I especially enjoy checking out the on-set footage of the actors acting out their animated roles for the motion capture. Fans of the film will especially get a kick out of that feature.

Sex/Nudity: We see a lot of bare Martian babies' bottoms

Violence: We hear the Milo's family cat puking behind a potted plant after he fed it broccoli; While not really violent, we see Milo wearing a zombie t-shirt and talking about getting to see a zombie movie; Milo twists Gribble's nipples through his shirt; Martians shoot at Milo and pursue him; On Milo's eye-piece camera, Martians grab Gribble and shoot his camera; We see the burned outline on a wall from previously executed Martians. The aliens drag Gribble over to the firing squad. Milo kicks some Martians; Martians shoot at Gribble and Milo; Martians shoot at them again and Gribble's head, which is covered in a puff of dirt, catches on fire (but it just burns away the dirt and he's otherwise okay); In a flashback, we see a sharp rod filtering electricity descend toward a mom's head while she's asleep and fastened to a table. We then see a blast from a distance, and she's gone (presumably killed); Ki stabs two guards with a syringe that knocks them out; Male Martians tackle the female Martians; Supervisor aims her gun at Milo and misses, but he trips, breaking his helmet; We see a person start to suffocate but is saved. We then see another person start to suffocate to death; Ki kicks gun out of Supervisor's hands and it explodes Disclaimer: All reviews are based solely on the opinions of the reviewer. Most reviews are rated on how the reviewer enjoyed the film overall, not exclusively on content. However, if the content really affects the reviewer's opinion and experience of the film, it will definitely affect the reviewer's overall rating.