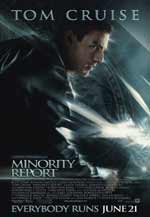 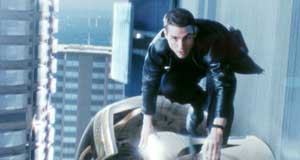 In 2054, John Anderton (Tom Cruise) is a chief of police for a anti-criminal program called "Pre-Crime." The FBI are brought in (specifically agent Danny Whitmer) to check out the Pre-Crime program, which relies on a "perfect" system for catching their criminals before they commit their crimes. This system involves three genetically altered humans referred to as Pre-Cogs who can see murders before they occur. Soon after the FBI come on the scene, John sees one of the Pre-Cogs visions including himself in a murder predicted to happen within 36 hours. Immediately John's own teammates are targeting him for the murder of a man he claims he doesn't even know. What follows is a thrilling chase as Anderton seeks out to find who the man is that he is supposed to kill and why.

Steven Spielberg is the man who brought you E.T., Jurassic Park & Jurassic Park: The Lost World, the Indiana Jones films, Saving Private Ryan, and even the dread bomb, last year's A.I. (Artificial Intelligence). In 2002, Spielberg has brought to life a short story called Minority Report in the form of a mature thrilling sci-fi adventure that is not for everyone, but an engaging story nonetheless.

The film approaches the future in a way not too many have. Spielberg brings the viewer incredible and realistic visuals that will please any sci-fi or action buff. The world of 2054 that the filmmakers create include, but are not limited to, animated cereal boxes, animated magazine covers, and even interactive advertisements that address you by name. These are just a few of the overtly fun futuristic gadgets and gizmos in Minority Report. But the film is hardly as light-hearted as all that might seem. What might make this movie even remotely fun to some people is the mystery that surrounds John Anderton's accusations and the thrilling and intriguing events that unfold because of them. The cinematography aids in making the overall atmosphere of the film darker than usual. A moody slate gray tone is washed over the print making the futuristic setting that much more interesting to watch. But don't get me wrong, this film isn't all about visuals, in fact the visuals are merely and aid for the real story. The movie is hardly a free-for-all effects show like the newer Star Wars films are mostly (don't get me wrong, I often enjoy those as well). The acting in Minority is topnotch as Cruise delivers his best performance that I've seen. The screenwriters

fleshed out his character well and Cruise did a great job portraying John Anderton. Farrell did an okay job as the FBI agent Whitmer while Samantha Morton did a superb job as the creepy Precog Agatha. The film also included a lot of surprise, much-needed humor to relieve the film's tension, but didn't go too far.

Ah, yes. A movie this good must have flaws. Of course! First of all, some will pick apart plot aspects which is unnecessary but the main faults, as usual, lies within the film's content. Minority Report pushes the PG-13 envelope pretty good with sexual and violent content. A lot of the murder plot is disturbing and may be unsettling to some. This is certainly, undoubtedly a film to leave the kids home for. Minority Report is not a family movie (not that most action movies are, but this is a definite "no"). Sexual material exists with an affair that is shown that leads to one of the murders that Precrime stops (which also appears in the film's trailer that you might have seen in the theaters). In some sort of fantasy club, the owner talks about sexual fantasies and we even see a man in a room having some kind of distorted sexual stimulation with a hologram. The sequence is brief, and clearly unnecessary to the picture, but was more than likely included because Spielberg wanted to lighten things up there. Sorry, that wasn't needed. Violence is heavy due to the murder shots and some encounters during Anderton's attempts to escape Precrime's grasp. Language isn't as bad as it could be, but heavy due to Anderton's spouting of the "f" word and other objectionable words used throughout the film from various characters.

All in all, Minority Report was an amazing film that literally had me and my colleagues on the edge of our seats for a great deal of the film's length. Due to content, I want to lower my rating of this film, but due to its clever and intriguing story, I have mostly rated the film on that effect and so have granted it 4 and a half stars out of five.

Sex/Nudity: Surprisingly a lot. The opening sequence involves a couple having an affair. Although nothing explicit is seen, we see the couple preparing to have sex (he removes his shirt, revealing an under shirt and see him in his boxers), and they make a couple comments about it. We then see the couple on top of her bed kissing, etc, but are interrupted before they go further. There is some sexually related dialog during the film. A woman playfully grabs John's butt after he has been sedated by a doctor. In a scene where the Precrime police release spider robots through an apartment complex, we briefly see and hear a couple having sex (from the shoulders up), who are interrupted by the spiders who check the inhabitants for their identity (while looking for John). In another sequence, John goes to see a friend who is big into multimedia technology and holographic material. As the man shows a customer around his "club," he mentions that people can have sex with whoever they'd desire to. To this, we see a door open and reveal a man laying on some kind of table with distorted holographic images surrounding him. It looks a lot (and he makes related sounds) like he's having sex with a woman in a bikini, but it's hard to tell (it's brief). While trying to sell a similar experience to John, he makes a few lewd comments and even briefly makes suggestive movements with his tongue. When John goes to a hotel, we see that the man behind the counter has a girl suggestively dancing on his screen dressed in a school outfit.

Alcohol/Drugs: John buys and is addicted to an illegal drug that he uses to help him sleep at night. He uses to also to help him deal with the death of his son (happens before the events in the movie). Some people have drinks during the film.

Blood/Gore: In the opening sequence showing disturbing images of a murder taking place, we see a clips of what looks like a man drowning another man and the same man stabbing a woman to death with a pair of scissors. We don't see anything really graphic, but we do briefly see some blood on her chest and clothes (in black and white footage). We see a drug dealer (living) who's eyes are missing from his head, to which we just see non-gory empty eye sockets. Danny has some blood under his nose after a fight. John has a small bloody cut on his neck from a plant and some bruises and small cuts from a fight. John hits a person in the throat with a shock stick and, as a result, a great deal of vomit projects from their mouth. Iris grabs a plant and as it struggles to break free of her grip, cuts the palm of her hand leaving a slightly bloody cut. We see a great deal of snot run from a man's nose. Although not graphic or gory, we see a large device placed on a man's head and we see as it pulls open a man's eyelids to expose his eyes (kind of disturbing). In a couple scenes we see a pair of human eyeballs in a plastic bag with some blood. In one scene, John drops these and they roll across the floor. One falls through a grate and he catches the other by the optic nerve. While blindfolded in a place he's unfamiliar with, he goes into a fridge to eat some food left there for him, but he grabs the wrong items and instead grabs excessively moldy and vile food which he spits out. We see a brief black and white image of a man being shot. In one instance we see some blood flow from the wound. In another sequence we see a man shot in the chest. We don't see the impact, but we do see the bullet hole in his chest and blood slowly soak that area of his chest before he is shot again (which is unseen). John has varying amounts of cuts and bruises on himself throughout the film.

Violence: VERY violent. We often see rapid brief shots from murders that are being predicted by the Precogs. We see numerous shots of a woman being drowned. We see shots of a man stabbing a woman to death and a man being drowned in a bathtub. There are some brutal fights including one where John severely beats a man out of anger (but isn't bloody or graphic). Several characters are shot, resulting in death. Etc... Disclaimer: All reviews are based solely on the opinions of the reviewer. Most reviews are rated on how the reviewer enjoyed the film overall, not exclusively on content. However, if the content really affects the reviewer's opinion and experience of the film, it will definitely affect the reviewer's overall rating.