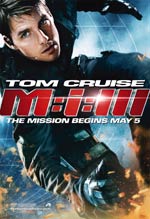 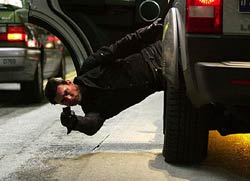 Tom Cruise, returns to one of his signature roles, Secret Agent Ethan Hunt, in Mission: Impossible III. In this pulse-racing, mind-bending action thriller, Hunt confronts the toughest villain hes ever faced -- Owen Davian (Academy Award® winner Philip Seymour Hoffman), an international weapons and information provider with no remorse and no conscience. (from MovieWeb.com)

It's hard to believe that it's been ten years since the first installment of the Mission: Impossible film series released to theaters. The action/thriller pit Tom Cruise's Ethan Hunt character against the hero from the televisions series, angering many original fans in the process (and I can't blame them). The sequel to the hit film released four years later, completely veering the franchise in another direction when director John Woo stepped in and turned the installment into an all-out, no plot, nonsense action flick. While it was entertaining, little to nothing about it was true to the show or even the first film, and many had given up hope on the franchise.

Now six years later, Mission: Impossible III stars an aging Tom Cruise reprising his role as Ethan Hunt for a third go-around. In the director's chair this time for his big screen debut is small screen success J.J. Abrams (the creator of hit shows Alias and Lost). The end result? The nonstop action of M:I 2 meets the espionage and plot-bearing format of the 1996 original to make Mission: Impossible III, incidently the best of the series thus far. This time around, the teamwork that was scarcely seen in the previous films is significantly increased, and an engaging plot weaves the action and the story seamlessly. Cruise is given more of an emotional element to work with this time around as well as his love interest is a fiance who isn't involved in his spy lifestyle at all (and is completely unaware of it). In past films, Hunt has always been linked with partners-in-crime, so to speak, who have always gotten involved in the espionage aspect of the story. But Cruise's age comes into play here and is used to the benefit of the story as Hunt has taken on more of a training role and less of the field action that lead him to the adventures in the first two films. Where Woo flopped face down at an attempt at a love story for M:I 2, leaving plenty of room for cheesy glances and cringe-worthy dialog, Abrams creates a sense of reality with the love angle here. This even pulls Hunt out of the spy scene entirely for a few sequences, grounding the character in a real civilian setting for the first time on screen. 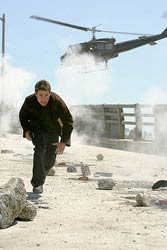 Hunt is also given his most ruthless villain yet: Owen Davian. Played by the extremely versatile Phillip Seymour Hoffman (anyone remember him as the lovable hippie Dusty from 1996's blockbuster Twister?), Davian is about as mean as they come, but never takes his character too far. Abrams also gives the nemeses some truly heartstopping moments together on screen. Hunt is about ready to settle down when he's pulled into what is most likely hoped to be just one last field assignment. But once they meet, Davian knows just what buttons to push on Hunt, and the film's truest tensions are realized.

Content drops the film in line with the previous two, making violence its biggest red flag. And due to the nonstop action, the emotional tensions, and the ruthlessness of the film's villain, Mission: Impossible III is also probably the most brutal of the trilogy. The film opens with a scene that won't be revisited till later in the film, in which a beaten Hunt is being interrogated by Davian who has a gun to his love interest's head. It's simply one of the most gutsy and viscious opening scenes for a film like this that leaves the viewers heart in their throat from the beginning. Other violence involves characters shot to death, car crashes and explosions, and several views of a dead person's face that is rather grossly disfigured. Sexual content is moderate as we see that Hunt and his fiance Julia live together (and see them in bed together one night, but nothing happens, although she's clearly just wearing the bed sheet covering her), and we see the two passionately kiss and disrobe in a hospital store room later on (ending as they fall out of camera view, implying sex). Finally, language is moderate as well, with a handful of "s" words, "S.O.B's," and uses of blasphemy. The accumulation of all of these factors adds up to a need to exercise caution for its rough nature and relentless action and violence. It hardly fits into the 'family friendly' category.

In summary, I found Mission: Impossible III to be one intense, well-crafted thrill ride. The content could have used some further softening, but in some ways it could have been a lot worse. If this is the final of the series, Mission: Impossible III goes out with a bang as the best of the three films. And if this film is any indication, director J.J. Abrams looks to have a bright future in big screen filmmaking ahead of him.

Sex/Nudity: We see that Hunt and his fiance Julia live together (and see them in bed together one night, but nothing happens, although she's clearly just wearing the bed sheet covering her), and we see the two passionately kiss and disrobe in a hospital store room later on (ending as they fall out of camera view, implying sex). Luther questions Ethan if he had slept with Lindsey (Ethan insists he did not); Zhen is wearing a dress that reveals her bare back. As part of a ploy, she comes on to a man to lure him out of a party, but it's just a setup; Ethan recalls an intimate time with Julia and we see a short montage that just shows her bare belly

Alcohol/Drugs: Some people have drinks during the course of the film, particularly in two party scenes.

Violence: A man threatens to shoot a tied up person (and shoots them in the leg before apparently shooting them in the head); There is a shoot-out at a factory that leaves several thugs dead; A person dies from an implant in their head; A helicopter crashes when hit by a windmill; A character hangs another character who's tied up out of a hatch in an airplane as he is interrogated; A vehicle explodes and a bridge is attacked by helicopters and missiles; A character is put in restraints; Other people are shot and killed in the course of the film, a person is killed when hit by a truck (we don't see the impact), etc... Disclaimer: All reviews are based solely on the opinions of the reviewer. Most reviews are rated on how the reviewer enjoyed the film overall, not exclusively on content. However, if the content really affects the reviewer's opinion and experience of the film, it will definitely affect the reviewer's overall rating.