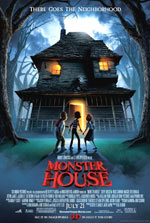 Monster House is an exciting and hilarious thrill-ride tale about three kids (voiced by Mitchel Musso, Sam Lerner and Spencer Locke) who must do battle with a mysterious home that is determined to eat every trick or treater in sight on Halloween.
(from MovieWeb.com)

Monster House is the latest to surface amongst a sea of disposable CGI-animated feature films hitting screens in recent months. Taking the form of a horror film aimed at children, Monster House is a hit n' miss (mostly miss) story that has promise, but fails on oh so many levels.

While the movie's animation may be an acquired taste, the film has pretty much no cute factor. And while an animated film doesn't have to be cute to work, this becomes just one of the many strikes Monster House has against itself. The main characters are two outcast children named DJ and Chowder who get left home alone on the eve of Halloween with an irresponsible gothic baby sitter who calls herself Zee. DJ and Chowder have suspected that something isn't right across the street in old man Nebbercracker's house, and things escalate when Chowder's beloved basketball land's on the man's property. In an attempt to retrieve the ball, DJ is caught by Nebbercracker and the man ends up having a heart attack after getting all worked up (and it appears that he dies). This unleashes the fury of the "monster house."

The film's heroes are nothing special. While I tend to gravitate towards the underdog, these kids just plain aren't very likeable. And no one in the film seems to have any responsibility nor any drive to be responsible. DJ's parents just seem to let him do whatever and also appear to just be rather incompetent. Simply put, what message does Monster House send?

The horror element to Monster House is still a bit much for kids. I'd have to go out on a limb and even say it's got to be downright scary for a lot of them. And besides that, some elements also may just plain be disturbing. For one, we get a first person perspective from DJ as Nebbercracker flips out and collapses on top of him. It's creepy, disturbing, and suitable for being filed under "inappropriate" for a children's film. Also, when it's revealed why the monster house is possessed, the origin of the spirit in the house is rather disturbing -- that and the allusion that when someone is pulled into the house, they're eaten alive (which is explained before the film's end). The goth baby sitter's pseudo-boyfriend Bones is also a creep. He tears up DJ's stuffed animal and licks it in a perverted way before later making a pass at Zee (but she actually does something admirable by throwing him out of the house because of it). If you're looking for a role model within the pixels that make up this animated film, I don't think you'll find any.

To make matters even worse, the movie isn't even really all that funny. When the kids do actually make a joke or say something that is supposed to generate a laugh, it just feels awkward and sorely unfunny. The only characters that do seem genuinely funny (but still, only at times), are the cops, voiced by Kevin James and Nick Cannon. Besides those characters, misfired jokes include stupid jests about puberty and just silliness that never warrants even a chuckle. You find yourself wanting to laugh but realize there's nothing there to work with.

Despite an interesting premise, some somewhat exciting action sequences, and intriguing animation, there's not much to save Monster House from the land of animated film obscurity. Director Gil Kenan and producer Robert Zemeckis may have thought they could pull off such a tall undertaking, but its the kind of project that -- dare I say -- probably would have been best pulled off by the likes of Tim Burton. Instead, all we're left with is an empty house with nobody home.

Sex/Nudity: Jenny says that the house has a uvula and Chowder misunderstands, saying "Oh, so it's a girl house!"; Bones comes on to Zee, but she throws him out of the house; DJ's Dad teases him about going through puberty after hearing his voice crack; DJ tries impressing Jenny by saying he has "lots and lots of puberty."

Alcohol/Drugs: Bones has a beer in hand and appears drunk in one scene (we later see the bottle on the monster house's lawn); Officer Landers takes a sip of some cough medicine (which probably has alcohol in it)

Blood/Gore: None. We do see a few 2-liter bottles filled with urine.

Violence: A house consumes several people and a dog; A house gets up and runs after some people; A person falls into a vat of concrete, presumably dying; Dynamite blows up a building, destroying it, etc Disclaimer: All reviews are based solely on the opinions of the reviewer. Most reviews are rated on how the reviewer enjoyed the film overall, not exclusively on content. However, if the content really affects the reviewer's opinion and experience of the film, it will definitely affect the reviewer's overall rating.