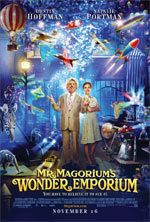 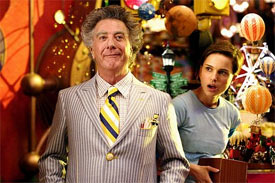 Portman plays Molly Mahoney, the awkward and insecure manager of Mr. Magorium's Wonder Emporium, the strangest, most fantastic toy store in the world. But when Mr. Magorium (Hoffman), the 243-year-old eccentric who owns the store, bequeaths it to her, a dark and ominous change begins to take over the once remarkable Emporium. (from MovieWeb.com)

No one likes false advertising, yet it's difficult to give a movie like Mr. Magorium's Wonder Emporium a two-minute trailer without swinging it as a gushy, magical children's film, or a mixed-emotions drama. And the poor box office performance of the film confirms that audiences didn't get what they'd expected. Still, Mr. Magorium's Wonder Emporium is arguably one thing indeed - a unique and creative motion picture experience that is still rather fun - even if the characters are enjoying it just a tad more than you might.

And that's actually one of the things that makes Mr. Magorium's Wonder Emporium an enjoyable experience: the characters are having fun. But what else that separates this film from the inevitably comparable classic Willy Wonka and the Chocolate Factory is that these characters have more going on outside of the store. In fact, the biggest problem people are having with Magorium is its heavy thematics. The main plotline, besides introducing us - the viewers - to Mr. Magorium, his store, and his friends included, is that he's passing the store on to his faithful employee, Molly Mahoney (who is incidentally wonderfully portrayed by Natalie Portman). What might not be made evident however - and be warned that this might be spoiler material here for some of you - is that Mr. Magorium believes it's his time to "depart" from this world and die. Because of this, the film takes a surprisingly more serious tone towards the middle that deals with life, passing on, and a poignant look at the mark we leave on others. The way the director handles this is still somewhat light in comparison to how heavy it could have been taken, but the message driven home is entirely about believing in yourself when you feel you can't do something and believing in the impossible when it doesn't make sense. Given the nature of the Christian lifestyle, they're themes many of us can apply to our own lives when believing the seemingly impossibilities of the spiritual life.

For those concerned with the "magical" nature of the story, there is never really given a concrete reasoning behind the source of the toys that come to life or for the unexplainable happening. If anything, it's just from believing it is possible being what makes it happen. There's no sorcery or witchcraft involved - simply the imagination at work. And that creativity that comes to life on the screen is what makes the random weirdness of the film fun to watch. We simply cannot predict what bizarre moment might occur next, and it's cause for some fun surprises. However, once the heavy themes mentioned earlier kick in, the "magic" and wonder hits the proverbial brakes and it feels a lot less like a fantasy. Another theme that may come as a surprise to some is a little boy named Eric who works at the store (sweetly performed by Zach Mills), is a little on the eccentric side as well, and therefore has trouble making friends. It's something many kids can relate to, and the direction the story takes with this is rather heartwarming, allowing for some of the most memorable scenes in the movie between Mills' Eric and Jason Bateman's accountant character, Henry. 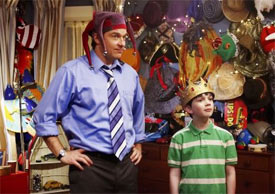 Dustin Hoffman's take on Mr. Magorium is definitely a mix of strange eccentricity and charm. While a lot of mystery is left about his character, Magorium is different enough to not feel like a poor man's Willy Wonka, but the temptation to compare is understandable. The script also gives Magorium a few moments to leave some lasting words on the characters, and for many, the audience. This story was written by director Zach Helms who had also written last year's Stranger Than Fiction, which also starred Hoffman. Interestingly enough, one of Hoffman's monologues to Mahoney at a significant point in the story will definitely remind anyone who'd seen Helm's previous story of Hoffman's character in that film. Regardless of whether or not Hoffman's Magorium is as-good or not as Willy Wonka, he turns in an Oscar-worthy performance here for certain.

Content is expectantly mild in this G-rated film. As far as language, only one "cr*p" is heard muttered by a magical character in the background, as well as two minor exclamations ("What in God's name?" and "My Lord"). In another scene, we see Portman's Molly done up in make-up for the only time in the film and wearing an elegant black dress that dips down low in the front, revealing cleavage. It's brief, but I was surprised to find it in a movie like this one. With those minor objections considered, the film is still very tame and family friendly.

Mr. Magorium's Wonder Emporium is a creative and unique fantasy film that may seem a little indecisive whether to be a film for the kids or for the big kids inside of every adult. The "magical" feel that the movie starts out with takes an extended break towards the middle of the story for a heavy theme about life, death, and legacy, but it's presented in almost a storybook style on a positive way to view the end of one's life as being a new chapter for another's. The beautiful film score helps with the wonder the story hopes to leave with its audience and convincing acting helps carry it home. Definitely not for everyone, but certainly one of the more whimsical family films you may see this year, Mr. Magorium's Wonder Emporium may not be the instant classic Willy Wonka is, but it's an imaginative and often fun tale nonetheless.

Sex/Nudity: Molly wears a dress in one scene that briefly shows a great deal of cleavage

Violence: A kid stares at Henry and then stomps on his shoe; Henry (aka "Mutant") faints and hits his head Disclaimer: All reviews are based solely on the opinions of the reviewer. Most reviews are rated on how the reviewer enjoyed the film overall, not exclusively on content. However, if the content really affects the reviewer's opinion and experience of the film, it will definitely affect the reviewer's overall rating.