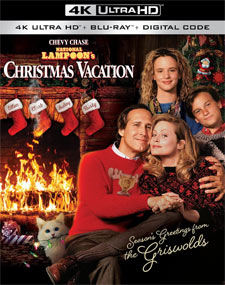 As the holidays approach, Clark Griswold (Chevy Chase) wants to have a perfect family Christmas, so he pesters his wife, Ellen (Beverly D'Angelo), and children, as he tries to make sure everything is in line, including the tree and house decorations. However, things go awry quickly. His hick cousin, Eddie (Randy Quaid), and his family show up unplanned and start living in their camper on the Griswold property. Even worse, Clark's employers renege on the holiday bonus he needs. (from Warner Bros. Home Entertainment)

When National Lampoon's Christmas Vacation released in 1989, its PG-13 rating kept me from seeing the now-iconic holiday pop culture favorite. In fact, I hadn't seen the film in its entirety until a couple years ago when I watched it via streaming. My first impression was that it was just OK, but repeat viewings have helped me to really appreciate what the movie offers, despite its rough edges. 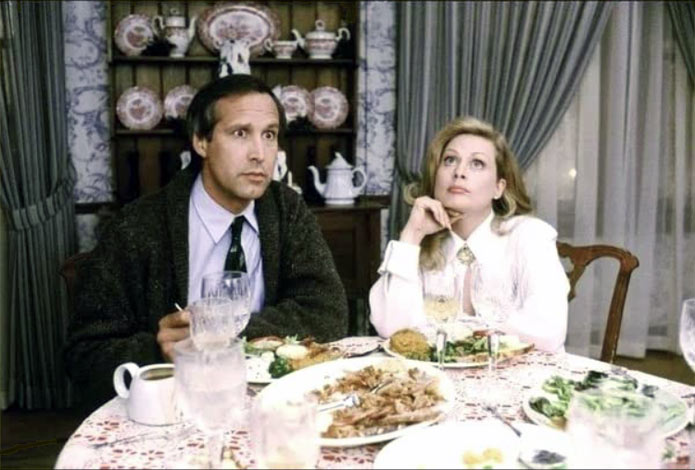 The biggest hangup I have with National Lampoon's Christmas Vacation is its frequent use of profanity and more adult-oriented content. Granted, it's all often presented lightheartedly, but that doesn't make it any better. The story follows the Griswold family as they set out to find the perfect Christmas tree and then ready their home for both sets of their parents coming to spend the holiday with them. The movie is loaded with nostalgia for spending holidays with the family, especially in the pre-electronic age of the late 80's; there were no smartphones or social media yet to impact the holidays. As an adult with a family of my own now, National Lampoon's Christmas Vacation hits much closer to home now; from Clark's struggle with work and worrying about a Christmas bonus, to the pros and cons of spending the holidays with family. Most of the story is presented from Clark's viewpoint, as he reacts to the insanity around him while also himself going way overboard with trying to celebrate Christmas in a big way -- from an oversized Christmas tree to coating every inch of the outside of their house with Christmas lights.

The movie makes full use of its PG-13 rating to deliver its more adult humor. From Clark spitting the "F" word during a frustrated tirade to some partial nudity as he imagines a busty woman skinny-dipping in his could-be-but-not-yet built backyard swimming pool, this is a movie aimed at grown-ups more than families. There's also several uses of the "S" word and some blasphemy, too. Some innuendo makes its way into the story as well, but it isn't excessive, with Clark flirting with the aforementioned woman in a department store or cousin Eddie talking about his dog Snots' tendencies for humping peoples' legs. There is a little violence mixed in, as well, but it's all done comedically and in exaggerated fashion. If there's one thing National Lampoon's Christmas Vacation does really well, it's not taking itself too seriously. 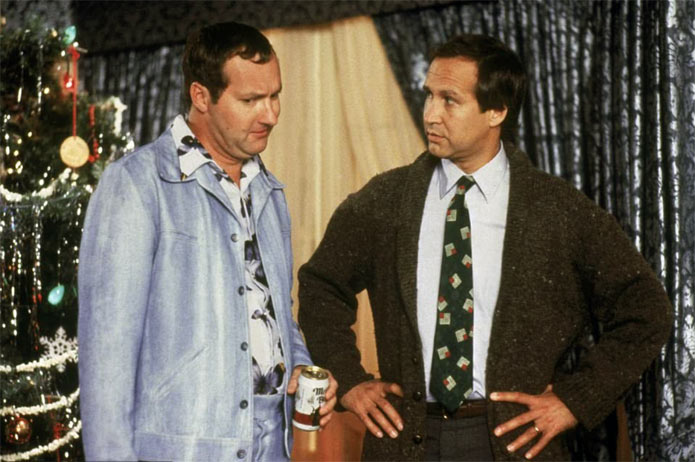 It's unfortunate that the content is as edgy as is, because at its heart, Christmas Vacation is actually a pretty sweet movie that offers a humorous look at an American family Christmas -- especially in the 80's and 90's. Some things are certainly dated for the time (especially when Clark finds old home movie reels to watch with a projector), but Christmas Vacation is surprisingly timeless. And, in the end, despite the family drama and frustrations, a failed Christmas dinner, and mishap after mishap, it's endearing that the Griswolds are still able to enjoy Christmas together. There isn't a big focus on the Christian side of the Christmas season here, but some of the Christmas songs heard do talk about the Savior, and Ellen even says the Lord's Prayer aloud at one point. (There's also a humorous joke when the family asks one of the more elderly family members to say grace over their dinner and instead she says the Pledge of Allegiance.)

The 4K UHD debut of National Lampoon's Christmas Vacation is quite good. While many movies from the time period vary in 4K quality, Christmas Vacation definitely looks great in the format. It's especially noticeable with background imagery and shiny things, like tinsel on the Griswold tree or the Christmas lights. It only enhances the film and makes it look better. I wouldn't say it's a poster film for the format, but it's certainly a jump up from the regular HD presentation. 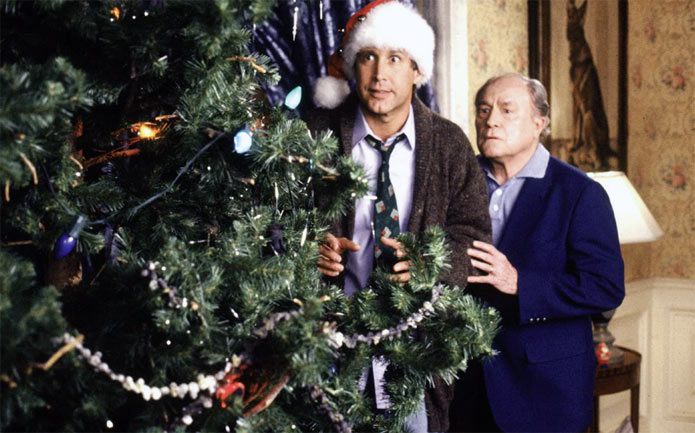 I wish I could blatantly recommend National Lampoon's Christmas Vacation, but its rough content makes it one to leave up to your own convictions. I definitely don't recommend it for the kids, however. It's becoming a fun one to revisit each holiday season, as the crazy antics of the Griswolds makes Christmas Vacation one you'll want to share with them again and again.

Sex/Nudity: We see Ellen in a nightgown as she lies in bed talking to Clark (who's reading a magazine); Clark sees a shapely woman named Mary behind the lingerie counter in the store (with some mannequins and labels showing examples of the lingerie). Mary's red blouse plunges low in the front as a V-neck that shows her cleavage. Clark becomes flustered upon seeing her and stumbles over his words, accidentally saying words like "nipple," "hooters," and "adultery." At one point, referring to the merchandise, she innocently says "Can I take something out for you?" and he laughs hysterically at the potentially suggestive nature of the question; Later, Russ walks over and finds Mary holding up lingerie for Clark to look at as he clearly flirts with her. She pulls up her skirt and shows side of her bare butt and hip to illustrate that you can't see her panty line; Audrey complains about having to share a bed with her younger brother while family stays over and says, "I have nightmares about what he does in bed alone when I'm not with him"; We see grandpa gleefully staring at a sexy poster on the ceiling above Russ's bunk bed; Todd says he's going to kiss every inch of Margot's body; We see Todd and Margot kissing with glasses of wine in hand; Eddie suggestively says he wants to be alone with his wife in their trailer; Eddie tells Clark about how his dog Snots is into humping legs and advises him that if it happens to just go with it; Clark imagines Mary at his pool in the backyard wearing a one-piece bikini. She then slides it off her shoulder as he lustfully presses his face against the window. We see her bare back and most of one of her breasts from the side. We then see her in the water, just her head and shoulders, and as she slowly gets out of the water, his fantasy is interrupted before we see any other nudity; Ellen wears a blouse on Christmas Day that has a diamond shaped hole in the center, showing some cleavage; We see Clark's boss's wife in her nightgown (with a little bit of cleavage); When the family is told to freeze, we see Ellen's hand is on Clark's clothed crotch. At one point someone shakes her hand and she puts it back on Clark's crotch.

Alcohol/Drugs: We see the family drinking and grandma seeming drunk; We see Todd and Margot kissing with glasses of wine in hand; Eddie and Clark drink spiked eggnog; While frazzled, Clark guzzles some eggnog; When Clark asks his father how he got through the holidays, his dad says he had a lot of help from Jack Daniels.

Violence: All of it is entirely played for laughs: The movie's intro features animation of Santa getting electrocuted, running away from a giant snowball, falling down a chimney, crashing headfirst through the roof, etc, all played for laughs; Clark unknowingly gets the station wagon stuck under a large truck and struggles to get it out from under it. When they pull out, the car goes over a snow hill and crashes through a sign, throwing the kids from the back seat into the front seat; When they cut the ropes wrapped around the Christmas tree the branches pop out and go through the windows; Clark accidentally staples his shirt to the roof of the house and rips it off, pushing the ladder back away from the house and almost falls off the ladder; Clark slides off the roof, grabs onto the gutter and ice shoots out and through the neighbor's window and onto some electronics, causing them to short out with a small explosion. Clark then falls into the bushes; Clark pulls down the attic stairs and is hit in the face as the stairs unfold and slide out; Clark steps on loose boards in the attic three times and they hit him in the face each time; Clark's feet crash through the ceiling and he lands on the bunk bed (but just his feet); Clark falls through the ceiling when the attic door is opened by Ellen; Todd and Margot fall and stumble around the room because of the brightness of the Griswold lights. Todd then falls down the stairs; Clark angrily kicks his Santa and reindeer lawn ornaments; Clark chokes on his eggnog in response to something Eddie says (played for laughs); Clark greases up a metal sled and it fires off like a rocket, sending him through snow hills, a shed, a street, and finally crashing in a Walmart parking lot (over-the-top and played for laughs); We see a cat chewing on Christmas lights. When Clark goes to plug in some that had become unplugged, the cat is incinerated from under a chair. The family then moves the chair to see a smoldering cat-shaped burn mark on the carpet; The Christmas tree goes up in flames when Louis lights his cigar. We then see Louis has fire on his back; Clark kicks something on the floor in anger; Clark gets the chainsaw and cuts a tree down. When it falls, it goes through Margot and Todd's window; The family all freak out as a squirrel jumps out of the tree and runs around. Clark's mother-in-law faints and falls over. Snots chases the squirrel chase around the house, causing a mess. The squirrel flies out the front door and both it and dog land on Margot; Margot punches Todd in the face and he falls backwards over a chair; We see Clark's boss tied up with a bow and gagged; Clark faints and falls forward to the floor; Cops and an armed S.W.A.T. team show up at their house, with the team crashing through Margot's front door. The S.W.A.T. team then crash through the Griswolds' windows; Louis accidentally explodes sewer gas when he tosses a match, throwning him forward and knocking the family down. The explosion shoots the plastic reindeer and sleigh lawn ornaments - which are now on fire - through the sky. Disclaimer: All reviews are based solely on the opinions of the reviewer. Most reviews are rated on how the reviewer enjoyed the film overall, not exclusively on content. However, if the content really affects the reviewer's opinion and experience of the film, it will definitely affect the reviewer's overall rating.