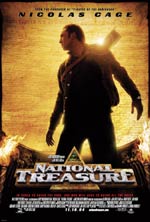 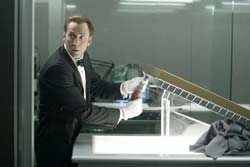 From the secrets of Americas past comes this action-packed modern-day treasure hunt. Academy Award winner Nicolas Cage stars as Benjamin Franklin Gates, who has spent his whole life searching for a fortune few dare to believe exists. This is the legendary Knights Templar Treasure, rumored to be the most awesome bounty in human history, and hidden somewhere in America. For six generations, the Gates family has chased after clues left behind by Americas Founding Fathers and scoured the nation in search of the treasure... (from MovieWeb.com)

I love adventure/treasure hunting films -- when done well. Indiana Jones and The Last Crusade, although the third in a pretty exciting film series, is arguably the most fun of the three... and my personal favorite. It was a near perfect blend of humor, action, and adventure (with some unfortunate graphic violence that crosses the line several times). Not many films have come around since that has been able to follow this formula so successfully. Ten years later, in 1999, The Mummy was a tongue-in-cheek take on the genre and pulled it off to mix responses. The follow-up in 2001 lost most of what makes the genre what it is, turning it almost entirely into a pure adrenaline-pumping action film. So where does National Treasure fit in?

Watching National Treasure felt like a mixed breed of an adventure film I'd have watched (and adored) as a kid and a film suitable for TV, especially an episode you'd find in a later season of MacGyver. And to be honest, it works really well. While highly implausible and often cliche, National Treasure, much like The Mummy, does not take itself too seriously. Those who do will most likely find plenty to complain about this film. But knowing ahead of time what to expect, I found myself thoroughly enjoying much of what unfolded before me. What allowed The Mummy to work, subtly poking fun at genre stereotypes, works wonderfully here as well. Director Jon Turteltaub keeps the mood light and fun through most of the film's duration. This is made possible, especially through the aid of Benjamin's (Cage) friend Riley who produced most of the film's laughs. 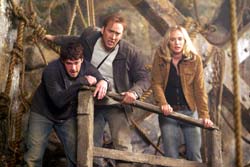 And what makes National Treasure different than most silly-but-fun action films is the uncommon focus on our nation's history. With the film's central characters displaying such a love for history and archaeology, it becomes infectious. American history may have never seemed this fun. The acting is a step above what you may expect these days from such films, with Kruger and Cage turning in fine and effective performances. Can you really expect anything less from Cage?

While extremely enjoyable, the film isn't perfect. Because there have been other films like Indiana Jones to have come along and do it better, National Treasure struggles for the respect it aims for and succeeds adequately enough to make it worthwhile. Absurdity abounds in the film and many plot developments are unbelievable, begging the viewers to allow plenty of imagination and leeway. Some will embrace this, many will not.

Violence and some intense chase sequences and creepy tomb sets are the film's only concerns for the younger audience. For the most part, National Treasure is guilt-free entertainment. When considering tagging the young ones along, keep in mind some mummified corpses are briefly seen as well as a quick shot of Ben digging a knife into his thumb (to draw blood, which we only see the knife pushing against the skin and blood on an artifact he smears it on). Other violence includes some shooting and a character falling into a dark chasm, presumably to his death.

All in all, National Treasure is a silly and implausible film that never intends to take itself very seriously. The filmmakers have put together a fun ride through American history and childlike adventure that some will appreciate while plenty won't be able to get past too many unrealistic moments. Go in expecting no less than a fun and fast-paced adventure film and there isn't any reason not to like National Treasure.

Sex/Nudity: None. When Ben shows up at his Dad's with Chase and Riley and says he's in trouble, his Dad asks, "Is she pregnant?" But this is played for laughs.

Alcohol/Drugs: There's some drinking at a fancy reception. While holding champagne glasses for him and Chase, Ben chugs his down real fast.

Blood/Gore: We see a couple mummified skeletons on a frozen, buried ship. Ben takes a knife and purposefully cuts his thumb to draw blood. We see the knife pressing against his skin for a moment but the camera cuts away before we see it break the skin. We then see him smear blood on an object (to make a print of something).

Violence: Some explosions, shooting, mostly non-lethal violence. We see a man fall from a great height, presumably to his death. Disclaimer: All reviews are based solely on the opinions of the reviewer. Most reviews are rated on how the reviewer enjoyed the film overall, not exclusively on content. However, if the content really affects the reviewer's opinion and experience of the film, it will definitely affect the reviewer's overall rating.