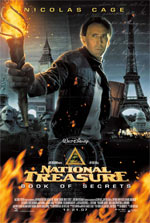 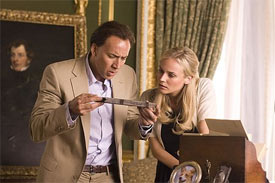 When the Gates family learn that one of their ancestors may have been a co-conspirator in the plan to assassinate President Abraham Lincoln, it's up to them to go to great lengths to discover the truth behind the mystery and clear their family name once again. And, of course, this requires them to find one of the greatest lost treasures of all time...

It's no surprise that after the success of 2004's Disney adventure film National Treasure, that a sequel would follow three years later. The original, although being rough around the edges enough to hint that it may have been edited to PG status from a light PG-13, was family-friendly and well-written enough to win mass appeal. It was one of the more exciting ways to tell about history, intertwining historical facts about our nation with fiction and a treasure hunting element. Dropping Nicolas Cage into the leading role gave the film a name and enough talent to carry the movie that relied heavily on puzzle-solving and North America-trotting to keep things fun and exciting. The end result definitely made the idea of a sequel enticing indeed.

The trailers that surfaced in early 2007 for National Treasure: Book Of Secrets, the first follow-up to the original, definitely promised more of what fans of loved about the first one. But with nearly every sequel, there are things within the second installment's storyline that may change your experience of the original beyond what you've come to believe or imagine how the characters ended up after the first story's conclusion. I'm going to divulge some of these changes and story developments here, and while they don't spoil the movie, they are plot facts that you wouldn't learn about just from watching the trailer or reading a brief synopsis. First of all, when we last saw our heroes in National Treasure, Abigail and Ben had fallen for each other and were on the road to happiness. However, that's not how things apparently turn out. When Book Of Secrets begins, we learn that not only did Abigail NOT join the Gates family as Ben's wife, but she kicked him out of her house that they were living in together and was starting to see someone else. Usually this would be some thin plot excuse to write a main character out of a sequel who may just be played by someone who had chosen not to reprise their role. However, Diane Kruger does return as Abigail Chase and it all just feels like an unnecessary attempt to work in some character conflict that may not otherwise exist. In a way, it tarnishes our sweet little idealistic ending from the previous film and makes their efforts in the sequel feel a bit like a retread of them falling in love like the first Treasure. Another strange plot element is the use of Oscar-winning actress Helen Mirren as Ben's mother and, incidentally, his father's (played by Jon Voight) ex-wife. Because there was no mention of Mrs. Gates in the previous film, it just seems a little too convenient to write in Ben's mom along with even more relational conflict as they just naturally become forced to spend time together. The character dynamic between the two seems forced and even disposable, and while it's fun at times to have Voight in the picture again, it's a bit corny when the whole thing inevitably turns into one big family affair. 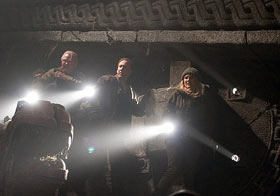 The first film wasn't without its extreme stretches of imagination and National Treasure: Book Of Secrets seems to only stretch that further. There are some near eye-rolling moments, but the passion of Cage's performance as Benjamin and the fun of seeing Abigail and Riley at his side on another treasure chase makes the film worthwhile for anyone who enjoyed the first installment. With Sean Bean out of the picture as the villain in the previous Treasure film, another reliable actor, Ed Harris, steps in as our anti-hero. Harris offers a strong, intimidating presence, but as the story progresses, falls prey to some weak lines in the script and some of your usual villain cliches. Still, Harris pulls it off more successfully than most others in his shoes may have, helping this sequel from becoming something as horrid as another Tomb Raider episode. The patriotism and sincerity of National Treasure: Book Of Secrets is honorable, which also helps the enjoyability factor, but it isn't enough to make up for the liberties taken in the reality department. But even at its silliest, Book Of Secrets is still plenty entertaining and fun. The puzzles are imaginative and exciting, and its often an infectious feeling to watch the characters' wonder as they uncover well-crafted clue after well-crafted clue.

The content is actually slightly more mild than the first film. Language is limited to a single "My G-d" as an exclamation, while most of the violence is nonlethal and not in any way graphic. But keep in mind that there is still plenty of action within, including a sort of "lite" version of the kind of car chase you might find in a Bourne film, and some physical punches thrown and such. Also, a climactic sequence does end in the death of a character, and it may be a bit dramatic/harrowing for some younger viewers (as well as some other exciting, perilous moments). Finally, there is a mild scene of sensuality when Abigail tries to distract a man so Ben can look for something, and she ends up passionately kissing the man in the process.

While we all could have done without the seemingly random tense family quarrels and related dramatics, National Treasure: Book Of Secrets still retains enough of what made the first film so fun to keep it interesting and enjoyable. But because there is a slight, detectable case of "sequelitis" that can sadly almost be expected these days, Book Of Secrets isn't the film it could have been, and therefore just can't top the first experience three years ago. Still, if you're looking for a little holiday escapism, you could definitely do a lot worse than the benign entertainment that is National Treasure: Book Of Secrets.

Sex/Nudity: Abigail shows some cleavage in an outfit and, to distract a man, mildly seduces him, ending it with a passionate kiss as she tries to distract him from what Ben is doing across the room. The kiss is sensual, but nothing comes out of it

Alcohol/Drugs: Emily comments twice about tequila being what brought her and Patrick together originally.

Violence: We see a man shoot President Lincoln (off screen); we see another man shoot a man who we then watch die (not bloody); a car chase results in streets and buildings damaged; people are shot at; a man's house is broken into and he's knocked unconscious; a man punches a few other people; a person holds another with a knife to their throat (no one is harmed); a person drowns to death Disclaimer: All reviews are based solely on the opinions of the reviewer. Most reviews are rated on how the reviewer enjoyed the film overall, not exclusively on content. However, if the content really affects the reviewer's opinion and experience of the film, it will definitely affect the reviewer's overall rating.