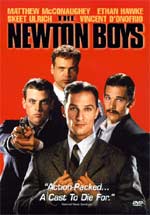 - for violence including bloody aftermath of a shooting, and for language. 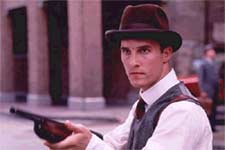 Matthew McConaughey, Ethan Hawke, Vincent D'Onfrio, and Skeet Ulrich star as The Newton Boys. In 1919 Texas, the Newton's are a poor farming family. Brothers Jess (Hawke) and Joe (Ulrich) spend their time working on the farm, cotton picking, while their older brother Willis (McConaughey) returns home after being fired from the job he got once released from prison. Although he claims he was innocent, Willis immediately returns to robbing banks with Brentwood Glasscock (Dwight Yoakam), a nitroglycerine expert, and Slim (Charles Gunning), their leader. When they need more help, Willis convinces his brothers to assist, and despite Joe's ethical objections, they finally agree. After losing Slim, but pulling off more successful heists, they're joined by their other brother, Dock (D'Onfrio), who's also just been released from prison. 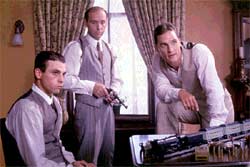 The Newton Boys compliments the old films of motion picture history, although tainted with a blood-covered scene (see "Parent Guide" below), and the frequent use of "h*ll" and "d*mn," amongst numerous uses of blasphemy as well. As I've read some critics say, I must agree with the fact that they did glamorize the whole bank robbing scene criminally. The scene where one of the brothers is shot 5 or 6 times (don't want to ruin it too much for ya if you want to see it), is really, really, bloody. I didn't expect that much blood to be shown in a PG-13 movie, but probably since it was just one instance, it earned its rating. This scene and the profanity throughout warrant extreme caution to anyone who would like to see the film or to any parents who would like to know the content of the film to see if their child should see it or not. If anyone hates gore--like me, hence one of the reasons why I stay away from R movies--I recommend that you either skip this film (although it's otherwise very good), see it with someone who can tell you when to close your eyes, or just squint when you see it or feel it's coming.

As far as foul language, I was angered by all the "g*dd*mns" used. It was excessive, too. As far as film quality and acting goes, however, it was flawless. I couldn't help but keep thinking of Vincent D'Onfrio, who plays Doc Newton here, as the evil alien Edgar in Men in Black. McConaughey did an incredible job as Willis Newton, the leader of the brothers as well, while Skeet Ulrich also did a great job as Joe Newton, the youngest of the bunch (who was only 19 when they wanted him to help them out). Ethan Hawke did a fantastic job too, providing the comic side of the film, as Jess Newton. Together, they create a lovable chemistry displayed best in the scene where Dock joins them after just getting out of jail and the four brothers wrestle, all excited to see each other.

If you like action, suspense, comedy, and westerns, check out these Newtons... just take a moment to consider the content beforehand, however.

Sex/Nudity: Minor. No sex. We see one of the brothers' bare butts as they do a back flip while skinny dipping. Willis and Louise start to make out in a car.

Blood/Gore: One of the brothers is shot 5 times by accident (unseen). When the others approach him, we see he's covered in blood. He has a hole in the side of his face & blood is literally oozing from his mouth. Later they show him being held by another brother in the back of the car as he's twitching, all bloody. They later show him trying to talk when he's lying in bed, all bandaged up, but the blood is all encrusted on his face. Finally, they show a cop who's interrogating him stick two fingers into one of his bandaged wounds, which they show a close-up of him applying pressure with his fingers (pretty gross). Later we see another brother's face is beaten and pretty bloody.

Violence: Quite a bit. Banks blowing up, people being shot, shot at, punched, hit, beaten, etc. Disclaimer: All reviews are based solely on the opinions of the reviewer. Most reviews are rated on how the reviewer enjoyed the film overall, not exclusively on content. However, if the content really affects the reviewer's opinion and experience of the film, it will definitely affect the reviewer's overall rating.