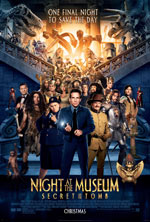 Night at the Museum: Secret of the Tomb

Larry Daley spans the globe, uniting favorite and new characters while embarking on an epic quest to save the magic before it is gone forever. (from IMDB.com) 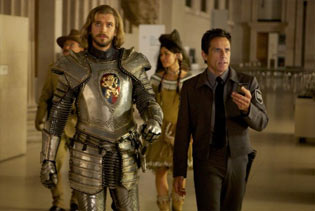 In 2006, a surprising and fun little family film about museum exhibits coming to life enchanted families far and wide. Night at the Museum was such a hit that holiday season that it spawned a sequel in 2009, Night at the Museum: Battle of the Smithsonian. The sequel wasn't quite as clever, but it was arguably funnier and perhaps even more whimsical, taking many of the beloved characters from New York's Museum of Natural History to the Smithsonian Institute, after many of the exhibits were transferred there. Now, five years later, an unexpected third and final chapter has been released, Night at the Museum: Secret of the Tomb.

From the very opening scene, Secret of the Tomb changes the feel and format of the series. The movie opens with a flashback to a digging expedition involving the son of an archaeologist falling through a dig site and accidentally discovering the Pharoah's tomb and the golden tablet that fans have come to associate with bringing the museum exhibits to life. The scene has an epic, detailed presentation (the sets are truly impressive) and there are more than a few similarities to the look and feel of Raiders of the Lost Ark. But it sets up a unique take on the tablet's origin and the back story of one of the characters from the first film. We then fast forward to the present day where Ben Stiller's Larry Daley is still night guard at the museum and still single (despite both previous films hinting at new, promising romances for him when they ended). But it's shortly after the start of this story that we discover that the tablet is deteriorating, threatening the future of the museum characters and causing pandemonium during a special banquet. Larry then looks into the tablet's history and tries to find a solution, which sends him to the British Museum where the tablet's presence awakens the museum for the first time ever. 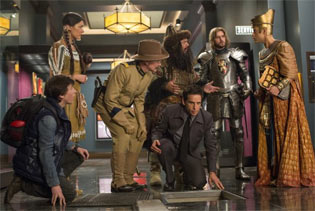 The tone of Secret of the Tomb is really different. Especially while Larry is investigating the tablet's origins, the film becomes weighed down by dialog-heavy scenes. Where Battle of the Smithsonian was whimsical and silly, Tomb takes on a more serious tone for the most part. That isn't to say that there aren't funny moments; quite the contrary. But the absence of a comedy-driven villain like Hank Azaria's Kahmunrah (and the presence of the comedic void, Rebel Wilson, here instead) hurts the overall presentation. Downton Abbey's Dan Stevens as Sir Lancelot is the film's biggest addition and strongest presence this time around, and he brings a lot to his scenes. Aside from Rebel Wilson being a detractor more than anything, the only actor change made from the previous films to this one was the recasting of Larry's son Nick. Jake Cherry is out and Skyler Gisondo is in as a wannabe-DJ teenager who fights Larry on his wishes for his son to go to college after high school. It becomes an odd theme--about growing up and following your own dreams--that ends up being tied into the overall theme of change, moving on, and letting go of things as times change. It does fit the story, but the film has this glaze of heaviness in its theme that wasn't there before. Gisondo isn't nearly as charming as Cherry was, and he makes the "Larry and Nick" scenes tougher to stomach. Seeing Larry single still, after almost ten years of Night adventures, adds to the bittersweet finish to a story that never needed finality. And then, the fact that actor Robin Williams died of apparent suicide just four months prior to the release of this film adds even more of a melancholy tone to the story.

The irony, so to speak, to there being a third installment that focuses so heavily on change and bittersweet endings, is that history--which the film series has spotlighted for so long (maybe less so this time around, though)--is in itself full of constant change, turmoil, struggle, and bittersweet endings. But Tomb even takes a page from the Toy Story 3 handbook (if there were such a thing), not only borrowing the name Trixie for the film's triceratops character, but by putting the audience through the emotional ringer of not only threatening to kill central characters, but then forcing us to watch them say goodbye. It's sad stuff, and nothing you'd really expect from a Night of the Museum entry, but as a third chapter to "end" the story as a trilogy, it works and kind of makes sense (But just try to stop your heart from melting watching Larry say goodbye to Dexter. It's too perfect). Still, it's one of those conclusions that makes you wonder if it were even necessary at all. The viewer would have been more than happy to have the "ending" be the more upbeat and happy one of the previous installment (in this case, Battle of the Smithsonian). But then again, how many great stories in history don't have heartache? 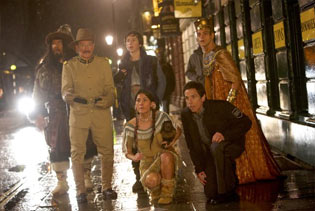 The content for the film is definitely PG, given some action violence and some monster action scenes. Sir Lancelot and some of the main characters battle the skeleton of a triceratops and then a multi-headed mythical hydra-like beast a little bit later on. The finale also involves a chase and fight with a villainous character who has trouble accepting the reality that he's not real (Buzz Lightyear again, anyone?). There's minor language with cowboy Jedediah saying "h*ll yeah" a few times near the beginning and Larry saying "d*mmit!" after being locked in a room later on. There's some family tension with Nick throwing a party at Larry's place for his high school friends when he assumes his dad will be out all night (and we see "red cups" littering the apartment), and the movie stresses the need for parents to let go of their growing teenagers to let them do what they want--even if it means skipping college to go DJ in another country for a year. Otherwise, for the most part, Secret of the Tomb is pretty family-friendly.

It'd be tempting to file Night at the Museum: Secret of the Tomb under "Sequels No One Was Really Waiting For," but truth be told, after the fun of Battle of the Smithsonian, who wouldn't want to see these guys in action once more? However, director Shawn Levy's goal to make this film a closing chapter for a forced trilogy makes it more of a bittersweet send-off rather than a grand finale. More an exercise in saying goodbye than anything, Night at the Museum: Secret of the Tomb really does have some great moments (including a sorta corny but really fun pair of cameos of actors playing themselves), and it's just fun to see some old cinematic friends once again, but this third and final chapter doesn't quite live up to all that's preceded it.

Sex/Nudity: None, but Tilly kisses Laa and flirts with him and Octavius makes several references to finding Lancelot handsome (played for laughs).

Alcohol/Drugs: There's a banquet a the museum where there may be some drinking, but it's not focused on. And Nick throws a party for his teen friends at Larry's apartment at the same time--unbeknownst to Larry, and without his permission--and we see red cups on the floor after people leave.

Blood/Gore: A character's nose starts to melt off (since he's a wax figurine that came to life) and it hangs off his face, but it isn't gory; A character's face starts to look sickly and mummify slightly as the tablet deteriorates.

Violence: Most of the action is based in comedy. A banquet is held at the museum in a new planetarium where the constellations are brought to life. However, the magical Egyptian tablet starts eroding and it causes the museum characters to go berserk. Attila takes an ax to an ice sculpture, Teddy Roosevelt points his shotgun at people, and other characters tear apart the banquet; A caveman named Laaa uses a defibrillator on himself, not knowing what it is; Jedediah and Octavius fall into an air vent and are trapped against a wall inside; Jedediah and Octavius find themselves inside a Pompeii exhibit and run away from lava before getting cornered by it. Dexter pees on the lava to save them; The skeleton of a triceratops chases the gang. Sir Lancelot then awakens and fights it; We see a famous statue of two characters in the middle of a fight come to life in the background of a scene where one continuously punches the other in the face over and over; Sir Lancelot and the gang fight a large multi-headed hydra-like beast. It throws Larry around, while Lancelot gives Nicky a dagger to fight the creature with. Eventually, Larry lunges at it with a defibrillator, rending it lifeless; A character steals the tablet and threatens the group to get away; A character throws a fit on a stage, slicing through scenery and throwing things; A character momentarily dies but then comes back to life; Another character starts to mummify but then comes back to life; and some other comedic violence. Disclaimer: All reviews are based solely on the opinions of the reviewer. Most reviews are rated on how the reviewer enjoyed the film overall, not exclusively on content. However, if the content really affects the reviewer's opinion and experience of the film, it will definitely affect the reviewer's overall rating.