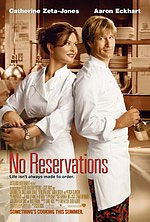 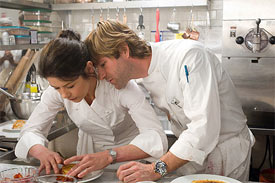 Master chef Kate Armstrong (Catherine Zeta-Jones) lives her life like she runs her kitchen at a trendy Manhattan eatery-with a no-nonsense intensity that both captivates and intimidates everyone around her. Kate's perfectionist nature is put to the test when she "inherits" her nine-year-old niece Zoe (Abigail Breslin), while contending with a brash new sous-chef who joins her staff. High-spirited and freewheeling, Nick Palmer (Aaron Eckhart) couldn't be more different from Kate, yet the chemistry between them is undeniable. Rivalry becomes romance, but Kate will have to learn to express herself beyond the realm of her kitchen if she wants to connect with Zoe and find true happiness with Nick. (from MovieWeb.com)

No Reservations is the Summer's second film built around the culinary arts inside an upscale restaurant. While Ratatouille was an animated flick that centered around a mouse who aspired to be a great chef in Paris, No Reservations is an adult romantic drama that is a character-driven look at the life of a successful New York chef. Catherine Zeta-Jones steps in as Kate Armstrong, the central character who is driven by her masterful cooking abilities, but has her world overturned when her sister dies tragically, leaving her niece in her care. During her absence from the kitchen for time to grieve, the restaurant fills her spot with a new sous-chef, Nick, who becomes a threat for her job when she returns. Every part of her structured life begins changing very fast.

While No Reservations may have all the ingredients for your typical romantic outing with serious plot themes, its story and delivery are what save this particular dish from spoiling. The film has a relatively predictable outcome, sticking to the genre's formula pretty faithfully. However, its players are really what carry the film. Zeta-Jones is at her best here, fleshing out Kate as an independent career-driven woman with a lonely personal life. Once her niece Zoe comes under her care with the death of her sister, Kate's forced to live for someone else and adapt her lifestyle to think about someone besides herself. Zoe is magnificently played by Academy Award nominee Abigail Breslin, who also stole scenes in the M. Night Shyamalan flick Signs several years ago. Breslin is precious and she brings a lot to the heartbroken Zoe who's in an a lot worse of a situation than Kate. Finally, Aaron Eckhart, who often brings a lot to even mediocre films - making The Core a lot more enjoyable than it should have been, for example - is great comic relief, representing competition and, inevitably, a little romance for Kate. 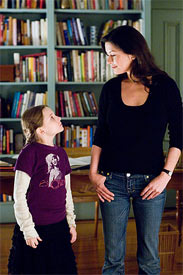 Director Scott Hicks keeps the look and feel of No Reservations simple - giving it more of a classic film touch. Instead of shooting for the bright, light-hearted air of a typical comedic romantic comedy (this movie is getting the "romantic comedy" billing despite not offering many laughs), Hicks gives the film a lot of darker tones, with lots of blues and more subdued colors. It gives it more of a real-life dramatic feel. And this kind of approach seems to work in favor for the more emotional moments. Where some films may use the death of Kate's sister setup as just a way to bring Zoe and Kate together for an ultimately lighter film that follows it, Hicks doesn't forsake the reality of such a loss and the affect it has on everyone involved. But No Reservations bears the emotion with enough breaks through comedic or sweet moments to keep it from becoming too heavy thematically. And again, Eckhart has a lot to do with that. With the film's PG rating, few of the characters provide cussing, and when the romance sparks between the leads, it's limited to some passionate kissing with any details of it progressing further being left completely ambiguous. This also keeps the storyline a lot "sweeter" as it focuses on the steps Nick takes to soften Kate's guarded heart, rather than the sexual attraction and forcing the romantic feelings on the audience with make-out or sex scenes.

While No Reservations proved to be a wonderful film in the longrun, it was a lot more serious than I expected. While there are some laughs, they're minor - with almost all of them being shown in the film's trailer already. The film is more adult in the prominent theme of Zoe losing her mother, Kate having to take her in, and the politics of trying to maintain a job in a fancy restaurant through the midst of it. There is quite a contrast between the restaurant-themed Ratatouille and No Reservations. In fact, while this film focuses more on the love relationships between family and that of a man and a woman, Ratatouille was more of a romance with food and the culinary arts themselves. For No Reservations, a restaurant kitchen is more of just a set piece and food preparation is more of a love language between two people sharing the same occupation than an actual passion for the art of cooking.

For parents interested in the content, it's more or less not really the kind of film young kids would even be interested in. Because it's often so serious, it's apparent that No Reservations is more aimed at a more mature audience than families or children. Content is pretty mild with just a handful of cuss words and two or so brief sexual references, while actual sexual content is limited to a short scene where both Kate and Nick kiss very passionately, but the scene ends before it progresses further. Also, the car accident involving Zoe and her mother isn't shown in any way, and we just see Zoe with a few post-accident scrapes while in the hospital, and nothing at all about the accident itself.

No Reservations may be your standard romantic drama, never really straying from the common formula for the genre, but its execution, story, acting, and even beautiful score by Philip Glass, all make it a worthwhile effort. Zeta-Jones, Eckhart, and Breslin are a wonderful team and the film is a nice little Summer surprise. If you're a fan of the culinary arts and want something more suitable for a family outing or something that's a lot lighter, Ratatouille is a better choice. However, if you're looking for a little date movie without the sexual content so frequently included in such films, you can have no reservations about this movie.

Sex/Nudity: A girl in the kitchen comments on a customer being a pig and that he stares at her "t*ts;" The same girl later thanks Nick for the tip that sex is better when Pavoratti's music is playing. Nick then jokes that another composer's music is only good for one-night stands; At Kate's apartment, we see Nick and Kate passionately kissing and nuzzling and he kisses her neck several times in a rather sensual scene. Both are clothed. The next shot shows Nick walking down Kate's hallway in the morning announcing to Zoe he's making pancakes. It's unclear if Kate and Nick slept together or that he just spent the night there; It's later somewhat implied when Kate shows up at Nick's apartment that she might spend the night there (we just see his door close with her inside the apartment, but the scene ends there.

Blood/Gore: We see some minor scrapes / abrasions on Zoe's face

Violence: Kate stabs a fork with a rare piece of meat onto a customer's table in anger, and then pulls the tablecloth off the table violently and storms out; Kate chases after Zoe and they both dangerously run through traffic; it's made known that Zoe and her mother get into a car accident that results in Zoe's mother's death, but we never see anything about it Disclaimer: All reviews are based solely on the opinions of the reviewer. Most reviews are rated on how the reviewer enjoyed the film overall, not exclusively on content. However, if the content really affects the reviewer's opinion and experience of the film, it will definitely affect the reviewer's overall rating.