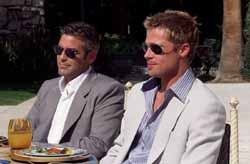 Danny Ocean has just been released from prison after serving time for a robbery crime. Once out he immediately starts work on a new plan... a crazy plan to rob three casinos at once. To pull it off, Danny needs to enlist the help of some trustworthy assistance. Ocean hires a total of eleven men (including himself) to carry out the tall task. Can they pull it off? Things get even more complicated when the ten discover Ocean's ex-wife is dating the casino owner of the casinos they intend to rob...

Wow. Quite the cast. This film surprised me in many ways, and also kind of disappointed me from a content standpoint. For what one might expect from such a cast and from almost any film these days (and considering the director who did such films as Erin Brockovich & Traffic), you would probably expect a vulgarity-soaked let-down. But although I'm grateful it wasn't worse, and that they did overall keep the swearing and vulgarities to a minimum, I can't help but notice that with just a little bit more fine tuning, we could have had a winning PG film on our hands.

Of course, we can note that the film does break the eighth commandment, "Thou shalt not steal." And while it does glorify the act, I believe it is possible to watch the film for entertainment value and not feel the need to rob a wealthy (or any) establishment following viewing the film. The film has a slick, cool, funky feel to it. It's sly, witty, and most of the dialog follows suit. It's a clever remake of the 1960 original which featured the "Rat Pack" Frank Sinatra, Dean Martin, Sammy Davis Jr., and others. It was nice getting to see such an ensemble and have it actually work while other notable times it has completely flopped (anybody remember Mars Attacks? If you see this film anywhere... run and hide from this atrocity in filmmaking).

Let me just say, I want to love this movie. I really do. There's so much to like about the characters and the plot. Let me say what I want to hate about the movie as well. The language. Yes it's arguably less than most movies in this genre, but were the 2 "f" words really all that necessary? Did the (roughly) eight uses of blasphemy add to the film? (Tell me it did and I'll show you another commandment) There were, of course, a number of other unnecessary 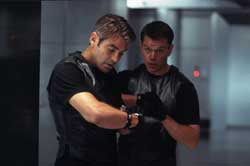 colorful phrases and a few sexual comments but thankfully not many. Only instance of sexual content otherwise is a brief glimpse at a flyer ad for a hooker who is suggestively holding her bare chest (no nudity shown). Also in a bar we briefly see some dancers dancing suggestively in a couple scenes. They really could have done without all this but unfortunately didn't.

The chemistry between the actors was magnetic and fun to watch. The movie took its time and may seem to drag for some, but it didn't rush through character development or the planning of the heist. It was well directed by Soderbergh and executed in a very stylish fashion. If they had only polished it up -- content-wise -- it would have been much more enjoyable.

Overall, I really liked the film, but due to the above-mentioned complaints, I can't completely recommend it. As always, please read all the content details carefully.

Sex/Nudity: Two uses of innuendo. While Rusty is playing cards with a table of guys, we see some female dancers in immodest outfits dancing in a somewhat suggestive fashion. We see a advertisement for hookers that has a topless woman on the front with her hands over her bare chest, but there is no explicit nudity.

Alcohol/Drugs: Lots of people have drinks during the film considering it takes place in a casino.

Blood/Gore: After being beaten up, we see that Danny has some cuts and bruises on his face.

Violence: Some gunshots; in a flashback we see a man shot as he's trying to rob a casino (not graphic); Danny is beat up by a large man Disclaimer: All reviews are based solely on the opinions of the reviewer. Most reviews are rated on how the reviewer enjoyed the film overall, not exclusively on content. However, if the content really affects the reviewer's opinion and experience of the film, it will definitely affect the reviewer's overall rating.