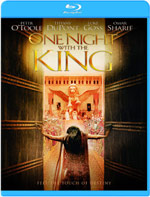 One Night With The King 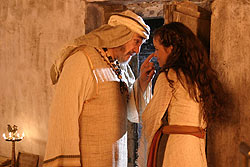 An epic motion picture set in an imaginative world of adventure, intrigue and romance, One Night With the King follows a young girl who rises from peasant to princess by going against the culture and seeking the King's heart rather than the riches of the kingdom. By 'chance' she is born with exceeding beauty to a people who have been carried away as slaves to the most powerful kingdom in the world. By 'chance' her parents are killed while she is young leaving her to be taken in by her uncle, a man who has found favor as a royal scribe. By 'chance' the Queen is executed by the unknowing King, spurned on by the ruthless plotting of palace princes hungry for power. By 'chance' the King is left feeling alone, pushed and prodded, desperate to live up to and avenge the battles of his father. By 'chance' Esther is carted off to the palace to become part of the Kingís harem at the same time a vengeful young prime minister with the Kingís ear is rising to prominence with a plan for orchestrating the genocide of her people. So begins the story of Esther, One Night With the King, a story that reveals that all of life is under God's command. Power, position and prominence are one thing, but when Esther must choose between all she's ever dreamed of and the fate of her people, will she be able to find the courage to step forward and embrace her destiny?
(from 8x)

One Night With The King brings the Biblical story of Esther to the big screen. Using breathtaking and impressive sets and visuals, the film transports the viewer from present day to the time of Esther, Mordecai, and King Xerxes. Besides the beautiful and believable scenery, Gener8xion, for the first time, has assembled an impressive cast. From the warmth of the always reliable John Rhys-Davies (Mordecai), the sweet innocence of newcomer Tiffany Dupont (Esther), the charm of Luke Goss (King Xerxes), and the tenderheartedness of Tommy 'Tiny' Lister (Hegai), to the intensity of both James Callis (Hamen) and Omar Sharif (Prince Memucan), each actor brings depth to their characters - something especially necessary for a story like this. And while all these ingredients add up to what should be a near foolproof mixture for a film, there are still a few elements that end up holding the film back from an even greater outcome. 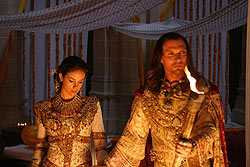 The biggest problem I found with One Night With The King, is in its editing. Seemingly amateurish at times, the film's first half jumps around as if you're watching one long trailer that sets up the remainder of the story. Squeezing the book of Esther into two hours may not seem like it'd be such a tall task at a quick glance at the scriptures, but to make for a feature film, dialog and events not found in the Bible had to be inserted for dramatic purposes. Unfortunately, the story's setup is choppy and hard to follow for anyone not familiar with the story. By the time Esther has been appointed Queen, the story begins to pace appropriately, and the strength of the film is revealed. And it's only then where the strength of the performances really shine. But another problem is a slightly overdone and melodramatic score provided by J.A.C. Redford, whose credits mostly consist of minor film Disney sequels and TV work. At times, Redford's touches are appropriate, while distracting in quite a few other instances. Also, the epic approach to the Esther story occasionally comes off too strongly. The presence of John Rhys-Davies and John Noble aren't the only aspects of One Night With The King that will bring The Lord Of The Rings trilogy to mind (they played Gimli/Treebeard and Denethor, respectively). If Redford's score isn't offering homage from time to time, the camera sweeps over the landscapes and the grand sets and wardrobes are likely to bear a bit of Peter Jackson influence. But where Megiddo failed on every level in trying to boast effects (which were terrible in every way anyway) instead of substance, One Night With The King does not. The effects are hardly noticeable as such, and the sets actually aid in solidifying the film as a fine Biblical period drama.

As I mentioned earlier that some of the story is fabricated to fit the feature film format, liberties were taken to also change some facts about the story. As not to spoil plot elements of this film, I won't divulge any details unique to this take on the Biblical tale, but those who know the story by heart may be surprised at the artistic license used. Nonetheless, none of the changes are particularly jarring or damaging to the story, especially since the film is likely to inspire the viewer to read the book of Esther after watching it (at least, it did for this reviewer). But One Night With The King offers a great example for putting faith and trust in God. The Christian themes present here are inescapable due to the very fact it's a story lifted straight from the Old Testament, but they work wonderfully without ever feeling heavy-handed or overdone. If anything, it becomes an encouragement to rely on God for our strength, something that most of us just don't do enough of.

Oh, and it must be said to not let Peter O'Toole's top-billing fool you. O'Toole is present in this feature for quite literally mere seconds at the start of the movie as the Prophet Samuel. He's not seen again for the rest of the film, making his credit not only pointless, but near laughable. Besides, the film really belongs to Dupont, Goss, and Rhys-Davies, and the credit belongs to them.

- John DiBiase, (reviewed: 10/12/06; re-edited and re-rated 3/6/13)
Blu-Ray Feature / Special Features Review
20th Century FOX gives the 2006 film One Night With The King its Blu-Ray debut in 2013. The movie looks quite good in HD, although it's obvious that it wasn't filmed with the intentions of showing it in high definition (a crystal clear preview for a new Christopher Walken drama, titled The Late Quartet, at the beginning of the disc shows such incredible clarity that it makes the movie appear grainier by comparison). With the wonderful scenery, sets and wardrobes, the Blu-Ray presentation really breathes some substantial life into the movie.

Watching it on Blu-Ray disc was only my second time seeing the film; I haven't seen it in the seven years since it first released. It's held up pretty well, but I found myself feeling many of the same things about the movie now as I did when I first reviewed it in 2006. The score is still often way too amateurish and melodramatic at times, while at other times it's just right (but it mostly stands out when it is being too forceful with what's happening on screen). The other thing is, the story's beginning feels much too weak. It's really not until Esther and the King are the focus of the story that the movie really finds its legs. And from that point on, it's a pretty good film. Although, in my second viewing, Tiffany Dupont's lack of any kind of ethnicity seemed more unrealistic to me. Most of the characters seem to have some kind of accent, but her plain, American accent made her performance in the start of the film seem more like just a girl who scored the major role in her school play and less like one in a major motion picture. Lastly, I have to admit that, since The Dark Knight released two years later in 2008--and I've seen that movie significantly more often than this one--I got a kick out of seeing Tommy 'Tiny' Lister in this film. He played a convict in a pivotal moment in the second Christopher Nolan Batman film, and it was cool to see him in a bigger role here.

Lastly, the "Extras"... sadly, there's only one, single Special Feature on the One Night With The King: an audio commentary track with Matthew Crouch, Richard Cook and Stephan Blinn. While it's neat to hear them chat about adapting the story for the film, designing the sets and costumes, and certain aspects of the story, it really isn't much at all to include as the sole extra on the Blu-Ray disc. Even a short behind-the-scenes featurette would have been great (Or something about the cast?).

When all is said and done, One Night With The King is a fine entry on Blu-Ray; just don't expect a problem-free script or a disc loaded with extras. Still, it's definitely a good Biblical tale that's worth a few viewings.

Sex/Nudity: After their wedding ceremony, Esther and Xerxes passionately kiss by his bedside, but the scene cuts away; After Xerxes mistakes Esther's secret meeting with Mordecai for an affair (he doesn't see Mordecai, just that she was secretly leaving being with someone), Esther approaches Xerxes' chamber and hears what sounds like sexual sounds or at least fooling around coming from his room. Assuming he is with another woman, Esther leaves disappointed. We then see it is not Xerxes, but what looks like a man and a woman chasing each other around the bedroom (apparently staged by Xerxes to make Esther jealous); We hear some men are made/cut to be eunuchs

Alcohol/Drugs: Some characters share drinks at meals/banquets during the film.

Blood/Gore: We briefly see an aerial view of a battlefield riddled with dead bodies and some blood stains on the ground; A man about to be killed has a little bit of blood on his face; we see a tiny bit of blood on Mordecai's headdress after Haman strikes him there with his staff

Violence: We see a battlefield of dead bodies; a man and woman are apparently executed; a child's parents are taken away and presumably murdered; Haman strikes Mordecai in the head with his staff; We see Xerxes training on the battlefield with his men, sparring with swords and shields; Haman grabs a person by their throat and threatens to kill them; A man grabs another by the throat; We hear that a man is to be hanged Disclaimer: All reviews are based solely on the opinions of the reviewer. Most reviews are rated on how the reviewer enjoyed the film overall, not exclusively on content. However, if the content really affects the reviewer's opinion and experience of the film, it will definitely affect the reviewer's overall rating.