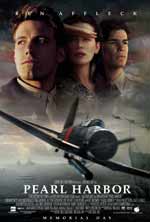 Rafe (Ben Affleck) and best friend Danny (Josh Hartnett) are lifetime buddies who join the Army to serve their country. When stationed at Pearl Harbor, Rafe meets Evelyn (Kate Beckinsdale), a nurse for the service, it isn't long before they begin a romantic relationship. Things get sticky when Rafe joins the Allied British forces as the unsuspected Pearl Harbor attack looms ahead in the coming months...

If anyone has read the reviews of 2001's Pearl Harbor, you'll be getting a solid, all-around feeling that the movie is almost as big a disaster as the horrible event itself. The JfH is here, folks, to set the record straight. I didn't see Saving Private Ryan. No Thin Red Line. No Platoon. No Operation Dumbo Drop. (I did see a little of In the Army Now on TV) I mean -- think about it? How many war epics aren't R?? Naturally, to make this film more available to a broader audience, it had to be toned down to warrant a PG-13 rating. But really -- do we need to see dismemberments and guts being spilled to know what war's like (like Private Ryan) I don't think so. Pearl Harbor ain't Saving Private Ryan. But it ain't Titanic. And it ain't Armageddon (same director as this film). But, in fact... is it all three? 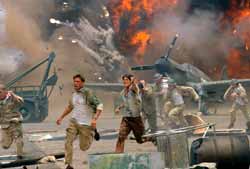 If I haven't started confusing you that's good, but if I have I hope the rest of this will make more sense. See, critics are having a hay day with Pearl Harbor. Of course we-the-public have been hearing about this film for probably over a year now, so expectations are high. The trailers and ads we see show key scenes, awesome camera angle shots, and top-notch special effects. Your promised big names like Ben Affleck, Alec Baldwin, and Dan Akroyd. But people, Pearl Harbor does deliver! You get the names, effects, angles, and even some laughs. It does have a degree of heart despite what the picky, know-nothing, brainless critics cry. What you don't get is an all-around 100% serious reality-captured-on-film masterpiece. You have an extremely patriotic entree with a low-calorie, low-fat powerhouse of war-related action sandwiched in between two slices of half ho-hum, half interesting romance plot. Take the almost-surreal patriotism and likable characters of Armageddon mixed with the Titanic formula (sappy love story followed by a real-life drama that encompasses those involved in the romance) and you basically have Pearl Harbor. What I didn't like so much about the film is it doesn't quite have the serious edge such a film really needs. It's almost overly-patriotic and I must agree it is ridden with cliches and overly-patriotic dialog. Does it hurt the film? In the long-run, I don't think so. But the almost-3-hour-long length does and the slow-paced romance may lead some of the men in the audience to slip into a sound sleep. However, after the syrupy intro, the audience is treated to nearly an hour of amazing visual effects, and such a life-like account of the dramatic and horrific bombing of Pearl Harbor that if you aren't moved, appalled, or effected in some way by the fact that this actually did happen, you're either not paying attention, or you're dead.

With all that to preface what is next in line, I bring you the content. Blood/Gore is obviously expected being this is a war film and thousands die when the Japanese surprise attack our naval fleet. Besides, one of the main characters is a nurse. Enough said. We see mildly bloody cuts and wounds, some bullet holes in people, but nothing excessively gory that stands out. The worst of the film includes Evelyn trying to stop a patient's neck wound from bleeding, and as she applies pressure to his neck wound, a bit of blood squirts out and lands on her uniform. We later see the closeup of a hand hanging off a stretcher/bed and is dripping blood. Aside from those we see Evelyn cutting the string of stitches for Dorie Miller (Cuba Gooding Jr) but isn't all that explicit. Earlier, we also see an empty plane on the ground that has dried blood splattered on the cockpit glass. Later, we see a character who apparently has shrapnel in his neck and two small slightly bloody bullet holes. 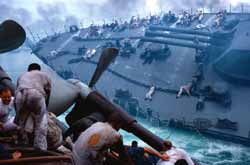 Sex/Nudity isn't the worst, but isn't the purest or most moral either. Several characters make reference to sex or wanting to have sex, but nothing really explicit. The extent of the sex comes when Danny and Evelyn share an extremely intimate moment in a parachute hanger where we see him shirtless and her in her bra as they kind of roll around and kiss. It becomes implied that they have sex. Swearing isn't the best as there are at least 8 "s" words, 6 S.O.B.s, and 9 uses of "G-d*mn." It could have been worse, but the way they used the swearing, it certainly wasn't necessary. Neither was the sexual content (is it ever?).

More a wide-audience pleasing blockbuster than a masterpiece drama, Pearl Harbor delivers what it needs to. Not the next Private Ryan but not the next Armageddon either. Overall, I liked the movie, although it could have been a little shorter. It's understandably violent being a war film involving a surprise attack that leads to the slaughtering of a U.S. harbor. With everything taken into consideration, I can't grant this film more than 3 and a half stars. I advise caution before seeing this film. Read all the content details carefully. It's a moderately rough flick and NOT suitable for kids (or even some adults). And due to the content mentioned, I can't clearly recommend or suggest the film.

Sex/Nudity: Some of the boys discuss lying to the nurses to get them to sleep with them. Rafe and Evelyn proceed to a hotel to do the obvious but Rafe changes his mind saying that although he wants to, he doesn't want to ruin the evening. Throughout the film some inexplicit comments are made by some of the boys and nurses about sex or just the desire to be with someone. In a montage of scenes, we see Evelyn in a bathing suit lean on top of Rafe, but the clip ends there. We catch a glimpse of the side of a man's bare butt as he is in a hospital bed. We later see Danny and Evelyn making out in a sensuous scene that implies they have sex. We see Danny shirtless and Evelyn is in her bra as they roll around a little bit and caress each other. (SPOILER: we later find out she's pregnant) As a Japanese pilot dresses during a scene, we see him with a small cloth covering his groin area.

Alcohol/Drugs: Drinks are seen during parties, toasts, etc. In one scene, Rafe is apparently drunk as he is taking shots of liquor with some of his buddies (which helps lead to a fight).

Blood/Gore: We see dried blood inside the cockpit window of a fighter plane that was once in battle. We see a little blood on a man's shirt as he is boxing another man. Later, Evelyn stitches up a cut on the side of Dorie's head (from that boxing match - and we don't really see the act of the stiching). There are varying amounts of blood/gore during the war scenes. Some people have slightly bloody bullet wounds; some have a burnt look to them (and are probably covered with oil), we see a lot of dead bodies, but not necessarily gory or excessively bloody. The worst scenes are those that take place in a hospital, but the scene is usually blurred some. In the hospital we see a man with a severe neck wound. When Evelyn puts her fingers on the wound to stop the bleeding, some blood squirts from it and lands on her apron. We briefly see the closeup of a hand hanging off a bed that is dripping with blood. We later see a character with a slightly bloody neck wound with a possible piece of shrapnel in it. The same person also has slightly bloody bullet holes in him.

Violence: Extreme violence. Mostly war-related with explosions galore and people being thrown, consumed by an explosion, shot at, shot up, planes being shot down, we see a plane crash, 2 men get in a brawl, etc. Disclaimer: All reviews are based solely on the opinions of the reviewer. Most reviews are rated on how the reviewer enjoyed the film overall, not exclusively on content. However, if the content really affects the reviewer's opinion and experience of the film, it will definitely affect the reviewer's overall rating.