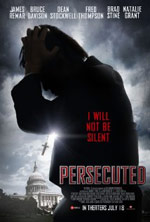 Nationally acclaimed evangelist John Luther is the last obstacle in the way of sweeping religious reform in the States. When a U.S. Senator and Luther's own supporters abduct and frame him in the murder of an innocent teenage girl, an unprecedented era of persecution is unleashed. Out on personal recognizance, Luther escapes police surveillance in search of the truth. And suddenly a once-normal life is targeted by a team of ex-military operatives who wage a relentless campaign to eliminate the incriminating evidence. As evangelist turned fugitive, Luther vows to expose anyone involved with, or profiting from, the girl's murder. It's a mission that brings him face-to-face with the coming storm of persecution that will threaten the entire American Christian community. (Written by Daniel Lusko for IMDB)

In a time when the subject matter of religion is as sensitive as ever, and many are ready to scream "hate crime" about any intolerance shown towards any religion that's not Christianity, it seems especially bold for a film like Persecuted to emerge and take a stance against religious equality. And while the movie is done in a far better quality than most faith-based films, its execution still is anything but airtight.

The film follows a preacher with a tainted past named John Luther who is caught in the middle of the passing of a "Faith and Fairness Act," in which a senator friend needs his support for. Without Luther's thumbs up, the bill doesn't have a chance, but the man of God decides it's not worth compromising his faith over. Sadly, the film doesn't take much time to illustrate exactly what the Faith and Fairness Act will do or is standing for. The best the film does to explain it is to suggest that passing the act would be watering down the Christian faith, putting all of the world's religions on the same plane. That idea is obviously a silly one in concept, especially since one would think most other religions wouldn't agree to this, but Luther's friend, Senator Harrison, insists it's good for everyone. Of course the preacher won't succumb to pressure, so Senator Harrison frames Luther as having an affair with a young girl and then murdering her. Obviously, it's something Luther would never do, but the evidence is stacked up against him and he's soon a wanted man on the run.

As Luther digs into the mystery, things start to only get worse as his church partner, Pastor Ryan Wilson (played by comedian Brad Stine), doesn't hesitate to take his place and Harrison continues to push the passing of the bill. But as the story unfolds, any informed movie fan will begin to get a sense of familiarity here. Persecuted begins to feel a lot like a Christian version of the far, far superior 1993 Harrison Ford film, The Fugitive. There are many elements that are similar, especially framing the main character to get them out of the way, but in The Fugitive, everything seemed much more life-threatening and difficult than they are in Persecuted. Luther's first stop in trying to find something out about his frame-up immediately yields the acquisition of evidence (which we then don't see how he obtained from the person reluctant to give it up freely). Of course this does lead to another problem for our hero, but the fact that Luther has next to no problem hiding from the cops is rather bizarre. There's even a shot of him sitting in a parked car with his hood up over his head as a police car passes by slowly and there isn't even a hint of suspicion from the cops about that sight? It's not like he had the elvish cloak that hid Frodo from the orcs; it's an older man in a dark hoodie sitting behind the wheel of a parked car at night. But if all of this isn't enough to feel like the story telling was a little lazy, a sequence ups the ante by having a character get shot twice in serious locations (the middle of the back between the shoulder blades and in the stomach in the front) and they proceed to stumble up a mountain while losing a lot of blood. It'd be tough for a soldier to survive such wounds under such conditions, but in Persecuted, we're expected to believe it's more than possible.

In all fairness, Daniel Lusko does a fair job giving this faith-based thriller a quality look and feel. The musical score, however, is a bit too continuous, unfortunately, feeling like a 40-minute episode of 24 where the score's just a bit too unending or even too loud when a less-is-more or more subtle approach may have worked better. It almost felt like a score to a different movie was playing over this one. Also, some scenes are just needlessly dim in lighting to force the mood that something sinister is going on or the people you're watching are up to no good. For example, the church board meetings are always in the dark, which makes sense if there are slides being shown and discussed (which happens in one scene), but not when they're just talking about politics. For a room filled with aging board members, you know the lights would be turned way up, not almost nonexistant. And the same goes for some shady scenes between Luther and Harrison. There's mood lighting for a scene and then there's lighting that seems way too forced to convey an emotion. Unfortunately, it was more frequently the latter.

Actor James Remar does quite well with the material he's given here to work with. For all that's questionable about the plot of Persecuted, it's great to have reliable players in front of the camera, and Remar (Red, The Phantom), Bruce Davison (X-Men) and Dean Stockwell (Quantum Leap, Air Force One) help the movie out quite a bit. Stine feels a bit like he's playing it up a little too much but it often works for the character, presenting him as that showy believer you might know in church who seems to have ulterior motives. Finally, singer Natalie Grant doesn't have a ton of screen time, but she does well as Luther's worried wife, Monica. It's fun to see Grant and Stine share the screen with famed Hollywood talent and it helps bring up the film's overall quality.

The content is really limited to just violence, but there are some pretty intense moments. The worst may be when we see a gun sneak into the frame and shoot a man in the head. We don't see any immediate bloody results, but when someone finds the seated victim, we see blood on the side of their head where the entry was and blood pooling on the floor under their dangling arm. There's also a shootout scene involving another character being shot in the forehead (with some blood shown), another in the leg with blood spurting out, and another character who's covered in blood from several wounds. Luther has a few bloody scrapes on his face throughout much of the film, but they often look far too florescent to look realistic. Davison uses "h*ll" and "for G-d's sakes" once both near the end of the movie, but that is the extent of any language spoken.

Persecuted is a flawed thriller but a cut above most Christian-themed movies. The decent cast helps make a lot of the potentially cheesy moments work much better than most films like this would. As far as a Christian thriller, you probably wouldn't find much better than this one, but when you stack it up against some Hollywood blockbusters with similar fugitive themes (like Mission:Impossible, The Fugitive), Persecuted just doesn't hold up.

Sex/Nudity: As he's being framed, Luther is drugged and thrown into the back of a car with a young girl. The scene is distorted to represent his drugged confusion and a man makes a girl pose with Luther for photos, as she caresses his face and such. We hear her say "you're a bad boy preacher man"; We hear that a girl was raped and murdered

Alcohol/Drugs: John mentions being involved in drugs and alcohol in his past; We see a shady man in a car giving a girl a drug in pill form; Luther is drugged in the neck with a syringe; A priest is shown smoking a cigar; Ryan pours champagne for himself and drinks it

Blood/Gore: Luther has some blood on his face after receiving scratches to it. We then see varying amounts of blood across his face throughout the rest of the movie; While Luther showers, we see blood mixing with the water as it washes down the drain; After a man is shot in the head (sort of off screen), we see lots of blood on the side of his head with the entry wound and then a lot of blood dripping down his arm into a pool of blood under it on the floor; A man is in a car accident where he's then shot in the stomach and then in the back, with lots of blood on his hands and clothes and face; A man is shot in the forehead and we briefly see some blood there. Another man is shot multiple times with minimal blood shown before they fall over. A woman is shot in the leg and we see a lot of blood spurt out on impact; We see the aforementioned victim of the car crash with lots of blood on them with it pooling around them as they sit against a wall.

Violence: A man backhands a girl across the face; A man tells a girl to scratch Luther's; While a man is seated at a desk, a hand and gun come into frame and we hear a gunshot as he slumps over. We then see from behind him slumped in his chair (dead) as people work around him. Later he's found with lots of blood on his head; John punches a bad guy; We see two cars smash into each other while driving. A man is shot twice -- once through the windshield and again through the back. We see lots of blood on his head and hands and jacket; A man is knocked down at his doorway as another man points a gun at him and shoots him dead off camera; A gunfight breaks out near a cabin and a man is shot in the forehead while a couple other people are shot at. We then see a woman get shot in their leg (with bloody results) and another man is shot multiple times; We see a man with lots of blood on him. A man takes a woman hostage and another man shoots him in the back (off screen). Disclaimer: All reviews are based solely on the opinions of the reviewer. Most reviews are rated on how the reviewer enjoyed the film overall, not exclusively on content. However, if the content really affects the reviewer's opinion and experience of the film, it will definitely affect the reviewer's overall rating.