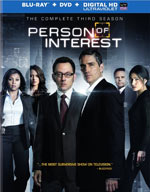 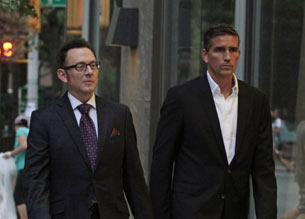 The Person of Interest team suffers a devastating loss and confronts staggering challenges in the hit series most explosive season yet. Adapting to the evolution of The Machine, now completely self-governed and hidden from all, technical wizard Finch (Michael Emerson) and ex-CIA operative Reese (Jim Caviezel) team with rogue agent Samantha Shaw (Sarah Shahi) to save lives and seek justice, but their missions now threaten to tear them apart. NYPD Detectives Carter (Taraji P. Henson) and Fusco (Kevin Chapman) finally unravel the criminal police conspiracy HR  but at a tragic cost. And former enemy  and now highly-tuned confederate of The Machine  Root (Amy Acker) becomes an uneasy ally when the team learns a second surveillance apparatus to rival The Machine is on the verge of activation. The electrifying, 23-Episode Season Three is a must watch! (from CBS)

For three years now, the Jonathan Nolan-helmed series Person of Interest has been going strong on CBS. Starting out feeling like a cross between Minority Report and The Bourne Identity, the series revolved around a brilliant billionaire, named Harold Finch, who had helped create a machine that could predict acts of terrorism before they would happen. The government greenlit this machine's creation after the tragic events of September 11, 2001, and the device ended up working great to produce numbers that would identify potential security threats. However, the machine worked a little too well. In addition to spitting out a number that identifies a major threat, it also spit out numbers deemed "irrelevant" - victims or perpetrators who didn't pose any serious threat to national security, but were either victims or criminals on a smaller scale. Finch enlisted the help of a down and out ex-government agent named John Reese and the two fought to save--or stop--those "irrelevant" people in each episode. 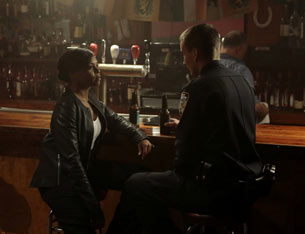 As the show has evolved and continues to do so, the show runners continue to take it into more sci-fi driven directions as Finch's allies grow and so does the threat against them and the nation's security. The Third Season sees the addition of two full-time cast members (who appeared only occasionally in Season Two) and the loss of one of the original cast. It's handled in full LOST fashion where someone you wouldn't expect is given the ax, proving that no one is safe in this show and anything can happen. And with it, too, it carries significant dramatic weight that shocks fans and gives the show some additional depth. And since such a great cast offers some pretty stellar acting, it makes it all the more impactful for one of them to not continue on.

Season Three's addition of Sarah Shahi as Shaw is an interesting one. She's kind of like a female John Reese in a way, in that she's super tough, almost emotionless, and can kick some serious butt. Shahi's acting is decent, but at times it just seems a little too forced. She's almost a robot in how hard she plays Shaw, but the show does give her some growth throughout the season that really benefits her character. She definitely has changed significantly from her introduction in Season Two to the end of the third season. Amy Acker also gets a much bigger role this go-around as Root. She's gone from hacker threat to "religious" nutcase as she pretty much treats the machine as a kind of god. It makes her allegiance to Finch's team an asset, but her extreme beliefs and attitude toward the machine is sometimes a hindrance -- especially when that comes first over the team. But she also sees some incredible growth in the season from lunatic to ally. By the season finale, she's starting to do more "good" than just whatever she wants.

Jim Caviezel (The Passion of the Christ) is still one of the best things about this show, but he does often take a back seat this season more so than the start of the show. The star power has split up the show's main focus, so instead of it being about Finch and Reese, with a bit of Taraji P. Henson's Detective Carter, it's now almost evenly split between Finch, Reese, Carter, Shaw, Detective Fusco (Kevin Chapman) and a little more of Root. Arguably one of the best episodes of the season is 3.13, "4C," where Reese is trapped on a plane with a number and needs to figure out who is trying to kill them... or if they're actually the perp. It feels very cinematic, especially after having aired not too long before the relatively similarly themed Liam Neeson-starrer, Non-Stop. And the fact that Reese is the main focus of the episode, it feels a little more like back-to-the-basics Person of Interest. Another highlight of the season is the story arc that is the taking down of HR. It's most of the first-half of the season and it's a really intense and exciting ride. While some moments are a bit too convenient (this is one of those shows that's big on last-second saves), it's still exciting television. As the season progresses, the focus shifts back to the machine and similar tech that surfaces as another threat. Things just continue to escalate and get more complicated with each episode until it leaves the season finale off with a sledgehammer being taken to absolutely everything. It's almost a totally new ballgame, so to speak, by the end of the season and it makes me very eager to see how Season Four will play out. 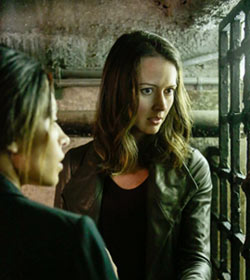 The content of the show to be most aware of is mostly the action violence. It's very Jason Bourne-esque but seldom graphic. There will be occasional moments of more blood than usual - like when some characters are shot or beaten up (one main character gets tortured and has their fingers broken, and while it's pretty intense, it isn't really graphic). One of the worst moments that sticks out, however, is when a character has surgery performed on their ear as a form of torture/punishment in episode 3.12, "Aletheia." But between Reese, Root and Shaw, there's quite a bit of violence involving gunplay and deaths by shooting. Where most murder mysteries deal with gruesome and sometimes truly sadistic deaths after the fact, a show like Person of Interest plays out like a PG-13 action movie almost every episode. Sexual content usually isn't an issue, although there may be the occasional passing joke or reference (but nothing major), and the second episode, "Nothing To Hide" shows a man and his wife's anniversary video that someone slipped flashes of a sex tape into (it's not super explicit, but there's enough to get the idea of his infidelity). Language is mostly just mild stuff like "h*ll" and "d*mn" with maybe an occasional "a" word or "S.O.B," but it's pretty infrequent and there isn't any significant blasphemy (in fact, the episode "Provenance" is all about the theft of a priceless Bible).

Overall, if you like mystery, technology and action, Person of Interest is right up your alley. If you've never seen the show, I highly recommend starting with Season One and catching up. The first season, especially, plays out like a crime drama and mystery, with the sci-fi aspects taking over slowly. Bad cops are turned good, worse cops just get evil, and it all comes to a head in the Third Season. It plays out heavily as a serial, so each episode relates with the next in some form, so binge-watching is actually a great way to really get the big picture of this excellent piece of TV action/drama.


Person of Interest: The Complete Third Season is available in a beautiful 10-disc Blu-Ray/DVD combo set, and you can also get the episodes from your usual digital video providers. You can also get it in a 6-disc DVD set, but I highly recommend the Blu-Ray if you can get it. The high-def Blu-Ray transfer is fantastic. It's crisp, clear, and makes the New York City backdrop really pop. Along with 23 episodes, and Audio Commentary from Michael Emerson on the season finale, "Deus Ex Machina," are the following extras:

Person of Interest: The Future of A.I. (26:02) - Some may be surprised to learn that this is a compilation of two round table discussions about artificial intelligence interwoven with clips from the season's episodes, and not a making-of featurette. Show runners Jonathan Nolan and Greg Plageman talk with an expert scientist about the technology of A.I., where he sees it going and the ethics of it. We then see another table of experts discussing the topic as well and how the show plays into it. Near the end of the discussion, it addresses Root's treatment of the machine as a kind of god or deity. They also touch on the eerie real-life events of CIA agent Edward Snowden having leaked classified information from the National Security Agency about how much the NSA is watching the American people -- and how similar that is to what the show addresses. 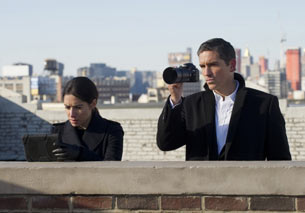 Saying Goodbye to a Friend (6:16) - Get your tissues ready. Don't watch this unless you've already watched Season Three as it focuses on the loss of one of the main cast. We see some cool alternate takes from the infamous scene as well. All the main cast and crew talk about the loss of their fellow cast member and what that means for the show. They also think on the impact it has and will have on them. It ends with us seeing the death scene being filmed and then that actor offering their thank you's to everyone afterwards. It's a really nice tribute.

Gag reel (3:03) - The gag reel is a pretty amusing collection of line mess-ups and goofing off on set. The profanity (some of it strong) is bleeped out, but it's pretty obvious what some of the cast are saying under the bleeps. The best parts include Caviezel goofing off on set (and doing a pretty good Christopher Walken impression, as well as quoting the 2011 Muppets movie) and getting his coat locked in a filing cabinet during a take.

Bear On Set (2:10) is all about the dog on Finch and Reese's team and his process and preparations for filming his scenes. The trainer talks about training the dog daily as well.

2013 Comic-Con Panel Q&A with Cast and Creators (25:02) - Couldn't make it to San Diego Comic-Con 2013? No problem. The highlights from their panel there are included here, including the cast and crew answering some fans' questions. The panel includes Jonathan Nolan, Greg Plageman, Jim Caviezel, Michael Emerson, Kevin Chapman, Sarah Shahi and Amy Acker (Taraji P. Henson couldn't attend due to a previous engagement). It's a pretty fun look into what was being planned for Season Three and talking about what fans could expect going forward.