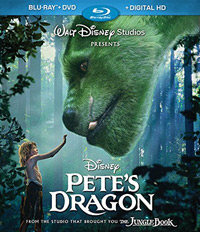 - for action, peril and brief language.

The adventures of an orphaned boy named Pete and his best friend Elliot, who just so happens to be a dragon. (from IMDB)

I'm tempted to open the review for yet another remake with some kind of negative remark, potentially dripping with sarcasm, but for Pete's Dragon, I'll hold back. The original Disney film, which featured an orphaned boy named Pete and his dragon friend Elliot, who could make himself invisible at will, released back in 1977. As a child of the 80's, I grew up watching the film quite a bit and I loved it. However, it's not a movie that has stood the test of time very well, so while hearing of its remake was bittersweet, I was also a bit curious about what they could do with the character and premise. I still love the look of the 1977 animated Elliot, and I've found it tough to totally embrace the new, updated look. However, with a cast supporting this modern retelling consisting of Bryce Dallas Howard, Robert Redford, Karl Urban, and Wes Bentley, I found hope that this new take could actually be good.

From the opening scene, the movie has a great, indie feel to it--meaning, it's more grounded. It's less cartoony in nature than the original, with the actors not hamming it up too much (Although Karl Urban's character, Gavin, does a bit, but more on that later). Still, the opening sequence is gripping from the start. We see Pete sitting in the backseat of his parents car, with both of them riding up front. He's reading a book called "Elliot Gets Lost" and his mom is looking back and telling him how he's the bravest boy she's ever met. Suddenly, a deer darts in front of the car, the car flips (as we watch Pete exclusively in this moment), and then we see the car overturned. It's apparent right away that only little Pete survived the crash. He crawls out, clutching his backpack, and heads out into the woods surrounding the road. He soon encounters some vicious, threatening wolves, and the little boy cowers in fear... when suddenly the grunts and stomps of a bigger beast approaches, scaring off the wolves. A gigantic dragon emerges from the trees and bends down to look at Pete. The little boy, who couldn't be more than 4 or 5 years old, asks "Are you going to eat me?" Immediately, the dragon rears back in shock and makes a "Whaa??" sound. And before long, he picks up little Pete, clutching him gently, and flies away. And this is all in the film's first 5 minutes. From Pete's first encounter with Elliot, I was sold on his new green friend. 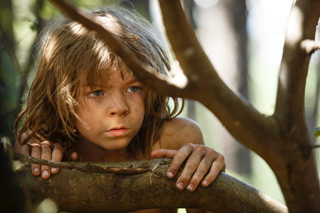 As adorable as that intro is, the whole heartwarming exchange between Pete and his clearly loving parents quickly ending in a deadly car crash is pretty unnerving. I have a 6-year-old son and I was hoping I'd be able to watch Pete's Dragon with him. I'm afraid with an intro like that, it'd be too rough for him. If anything, I think it could just make him worried or fearful (but, to be fair, I could also see it not faze him either). Otherwise, most of the film is pretty family friendly. There's some violence, like when the local construction workers inevitably try to capture Elliot, but it isn't too over the top. There are also a few emotional moments, especially towards the film's end, but overall, the resolution is happy and positive. It's not another occurence of The Good Dinosaur, and I'm thankful for that.

Oakes Fegley is pretty good as Pete. He's a bit quirky, and the times he howls like a dog are quite corny, but Fegley does do a respectable job as Pete. He's far better than the kid in the 1977 film. Elliot is just plain lovable, which a film like this really needs. He acts a lot like a cat or dog at times, and his loyalty to Pete is just wonderful. Deep down, he's the pet--and friend--we all wished we had. Bryce Dallas Howard is excellent as Grace, and Wes Bentley, while he isn't given much to do, is good as her fiance' and brother to Gavin, who's played by Karl Urban. I've loved Urban in everything I've seen him in--from RED to the recent Star Trek movies, to Lord of the Rings. He's versatile, and it's nice to see him branch out a bit here. I'd say Gavin is a quasi-villain. He wants to hunt and capture Elliot, and he wants the glory for it, but he's not so far gone that he's just evil and sinister. Urban also teeters on overacting or going over the top with some campy humor, but he doesn't quite topple over the edge. Finally, Robert Redford is wonderful as Grace's father, Meacham. He's a wood craftsman who has told the story of meeting a green dragon in the woods for years, and he's become known for it. It's fun to see how he comes into play with the story as it unfolds.

One thing I really didn't like about the film was some of the music. The film's score from Daniel Hart had its moments for sure, but there were quite a few folk songs that just never seem to fit naturally into the scenes. And while I like good folk music, the selections here stand out as not really being all that memorable or beneficial to the film.

The content for the film isn't too bad. As I mentioned, a fatal car accident in the first 3 minutes of the movie can be disturbing or unsettling to some. A little girl hurts her knee when falling from a tree, but we're not shown the injury. Pete falls and hits his head in another sequence. A fire causes a car with people in it to fall off a bridge, which is a harrowing moment, but it has a positive resolution. There is no blood and the only language seemed to be 1 use each of "hellfire" and "d*mmit."

If you grew up watching Pete's Dragon, but probably wouldn't reach for a copy to watch today, the David Lowery directed remake is well worth watching. If you're especially attached to the original, it's possible a remake will just be salt in the wounds, so to speak. Otherwise, it's a fun fantasy adventure film with a lot of heart, good acting, and a great cast. Fans of the central cast should certainly not miss Pete's Dragon.

- John DiBiase (reviewed: 11/28/16)
Blu-Ray Bonus Features Review
Disney seems to have been heading down a road of being a bit stingy with their digital copies, but Pete's Dragon's Blu-Ray release gets a digital copy as well as a DVD. It looks excellent in HD and the Blu-Ray disc offers the following features:

Notes to Self: A Director's Diary (7:31) is a mix of excerpts from director David Lowery's own diary, cast interviews and behind the scenes footage, some of which that shows how they used green screen to create Elliot in the real world.

Making Magic (2:12) is more about working with green screen, with all kinds of facts about the production -- like how it took 150 artists to create Elliot!

"Disappearing" Moments (9:12) is a steady flow or montage of deleted moments from the film, all set to music. They're like mini deleted scenes, but run together. It starts with Meacham and the kids wanting him to tell them the dragon story, then Pete and Natalie in the tree, Gavin and his men in the woods, Pete getting real clothes, Grace and Jack talking about Pete being alone for 6 years, Gavin getting pulled over by a cop, kids leaving a movie theater with Elliot lurking around the corner, Gavin trying to tell Jack the dragon is a "big score," Natalie and Pete sneaking out to the barn, more chase footage, and a few more other moments.

Bloopers (1:28) is mostly just the cast of the film goofing around and being silly on set. There is no profanity or bleeped profanity here.

Finally, we have a feature-length Audio Commentary, the "Nobody Knows" Music Video by The Lumineers, "Something Wild" Music Video by Lindsey Stirling featuring Andrew McMahon in the Wilderness, and a promo spot for filming in New Zealand called Welcome to New Zealand (1:56).

Violence: We see a car accident where the car flips in slow motion and then we see it lying on the street upsidedown; Little Pete is surrounded by wolves, but Elliot shows up, scaring them away; Meacham tells the story of a menacing dragon and how it took his gun out of his hand when he tried to shoot it. As he tells the story, he stabs the table with knife to say he stabbed the dragon; Natalie climbs a tree to chase Pete and they both fall. Natalie skins her knee; Pete falls from a tree while being pulled on from behind and hits his head on the ground. He then wakes up in a hospital; A patron in a diner slaps a waitress when she spills water she was pouring; A dog on a leash jumps and barks at Pete, who barks back. Pete flees, running over a car and climbing up the back of a moving school bus; Elliot chases Gavin and his men through the woods. Elliot knocks several trees down. Gavin pulls a gun on him and Elliot bites it out of his hand and throws him down; Elliot startles medical people who drop a person off of a gurney; Elliot is shot with darts and roped. He tries to fly away but can't and falls, with a tree breaking his fall; A truck busts thru a barn wall; Many cars pursue the truck; They plow through a pickup truck on a bridge, knocking it off the bridge; We see a multi-cop car pileup; There's a big fire on the bridge. Some people are trapped in a car about to go over the bridge as the flames rage. They then fall off the bridge, disappearing into the fog, but thankfully are rescued. Disclaimer: All reviews are based solely on the opinions of the reviewer. Most reviews are rated on how the reviewer enjoyed the film overall, not exclusively on content. However, if the content really affects the reviewer's opinion and experience of the film, it will definitely affect the reviewer's overall rating.