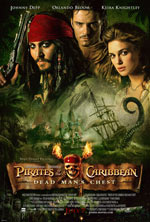 - for intense sequences of adventure violence, including frightening images. 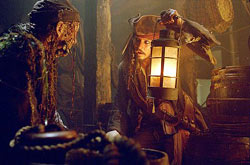 Captain Jack Sparrow (Johnny Depp) discovers he owes a blood debt to the legendary Davy Jones, Captain of the ghostly Flying Dutchman. With time running out, Jack must find a way out of his debt or else be doomed eternally to Jones' servitude in the afterlife. Making matters worse, Sparrow's problems manage to interfere with the wedding plans of a certain Will Turner (Orlando Bloom) and Elizabeth Swann (Keira Knightley), who are forced to join Jack on yet another one of his misadventures. (from MovieWeb.com)

If there was any movie that took audiences by surprise in 2003, it was Pirates of the Caribbean: The Curse of the Black Pearl. Johnny Depp turned in a career-defining and Oscar-nominated performance as pirate Captain Jack Sparrow, while the film also landed newcomer Keira Knightley on the map and solidified Orlando Bloom's stardom. Before the original hit theaters in 2003, it was tagged with a subtitle, The Curse Of The Black Pearl, in case the filmmakers had decided to make a sequel. With the success of the film, plans for two back-to-back sequels were made, with the first hitting screens in 2006, entitled Dead Man's Chest

Pirates of the Caribbean: Dead Man's Chest picks up shortly after the end of the last film, as Elizabeth and Will are about to tie the knot, but are arrested for helping Jack escape in the previous film. Dead Man's Chest is about as good as sequels come, despite containing some of the usual problems that come with sequels, as well. Much of Dead Man's Chest is brilliant, actually. The filmmakers take pride in the follow-up, and have clearly put plenty of time and attention to detail into it. Bringing such a complex character as Davy Jones, someone only ever talked about as sort of an analogy, is a clever thematic decision, especially since his name was referenced in the original. This also makes for an ingenious plot development to bring yet another character mentioned in the first film to light in the sequel. The films mesh so well, it's fantastic. 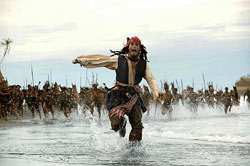 My biggest, and really only real gripe from the beginning was the way the story got moving. There's a prolonged, somewhat unexplained, and rather unnecessary sequence that takes place on an island with a tribe of natives that's mostly silly and disposable. Not only does it just make the film longer, but it just felt unneeded. It does make for a few good laughs and excitement, but overall, some moments were just too cheesy or silly to really fit into the Pirates story.

Also, this film is significantly darker and more violent than the first. While revisiting The Curse Of The Black Pearl recently reminded me of just how violent some scenes were, there seemed to be even more of it this time around. From off-screen throat-cutting, on-screen eye gouging, and blood-covered dying pirates, to a few shots of gory stumps from a sea creature, there's a lot about Dead Man's Chest that isn't appropriate for younger viewers. Director Gore Verbinski lets the content drift into unnecessarily violent territory many times throughout the film's duration, including gory or just plain really violent moments. And just the sight of Davy Jones and his pirates will likely scare the young ones.

For the second outing, everyone gives great performances once again. Depp is still the best and most memorable pirate in history as Captain Jack Sparrow. Although his performance is slightly goofier this time, Depp still holds it together with Sparrow as the glue for the film. But some of the best sequences are when the old team reunites with Knightley's Elizabeth and Bloom's Will thrown into the mix. Some other familiar faces from the first also return, including most of the Black Pearl's pirate crew (including some of the lovably mischievous ones from the first film who are for the first time no longer under the curse from the last story). Anyone who loved The Curse Of The Black Pearl will have a lot of fun with the jokes that reference it and the reprised roles. Verbinski takes each character a little bit further (as can be expected in a sequel), but never quite goes to such absurd or genuinely stupid changes that Stephen Sommers made with the characters for The Mummy Returns. 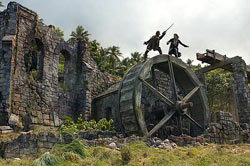 Bill Nighy was a perfect choice for the sinister Davy Jones. The effects used for Jones were also remarkable. While some of his ship's pirates didn't quite fair as well as Jones did, with some effects just being a bit too animated or cheesy, the overall look was done very well. The Cracken was also one incredibly menacing creature that looked amazing on film, making for some of the most exciting action scenes in Dead Man's Chest. Nighy was almost unrecognizable underneath a suit of CGI, but enough of his personality shown through to help make his performance almost as memorable as Barbossa from the first film -- but most definitely altogether more menacing!

Pirates of the Caribbean: Dead Man's Chest builds throughout its duration to an exciting and shocking finish, in more ways than one. So many plot threads come to a temporary close that leave the film about as wide open as possible. It's a cliffhanger ending that is almost as hard to swallow and move on from as the ending of The Fellowship Of The Ring was several years ago. So while the film doesn't necessarily best its original, it's a good sequel. Verbinski really needs to tone down the violence in these films so families can enjoy them (especially if Sparrow's image is getting slapped on cereal boxes and Happy Meal toys). But in the end, after the credits roll (and wait till the very end!), one thing rings true... Pirates Of The Caribbean: At World's End can't come too soon when it finally hits theaters next May!

Sex/Nudity: Men frantically look for a woman that is apparently aboard their ship because they found her dress (she changed into men's clothes). Not realizing she probably changed, they assume she must be naked; Elizabeth passionately kisses a man; Not realizing Elizabeth is dressed as a male pirate, she says she wants to board Jack's ship to find the man she loves. Thinking it's a man who's just said this, Jack makes a motion to not let the man on board (but is happy to realize it's Elizabeth)

Alcohol/Drugs: Some characters drink rum during the film and talk about rum; Jack might be drunk from rum in one scene; Rum is used as an explosive, Norrington appears drunk in a scene

Blood/Gore: We see a crow picking out a dead or dying man's eye while he's in a cage, as well as other gross looking bodies encaged; Jack uses the leg of a skeleton as an oar; Jack finds a man on his ship who is dead, but walking around as if alive, trapped under Davy Jones' ownership. He has barnacles and sea creatures on his face, and we see him eat a live hermit crab; We see a black spot grow on Jack's hand that looks almost like some kind of wound; Davy Jones and his minions are pirate ghosts with sea creature faces and features. Some look grosser and scarier than others; Jack is given what looks like a human toe as part of a necklace and bites it; We see the bloody lashings on a man's back after he's flogged; We see some bloody survivors of a raid by Davy Jones' men. Although we don't see the act, a man's throat is cut while another is stabbed, we see the bloody sword afterwards; We see a man has no face; A ghost pirate has grown into the side of the Flying Dutchman. When he pulls away from the wall to talk to Will, we see his face pull apart from his brain; A ghost loses its head (not gory) and we see it on the ground while its body tries to find it; Islanders have bones in their faces; One of Davy Jones' minions is struck with a sword and we see fish spill out across the deck of the ship; We see a human heart that is still beating; We see the empty eye socket of a pirate who is often losing his wooden eye; We see the bloody and burning stumps of a sea creature; A tentacle pulls a man through a porthole (we don't really see it, but hear the crunching sound)

Violence: Extreme -- lots of swordplay, characters eaten (not seen) by a large sea creature, ships attacked and sunk, a crow eating a prisoner's eye out, islanders trying to kill captives, and much, much more pirate-related violence (see "Blood/Gore" above for details) Disclaimer: All reviews are based solely on the opinions of the reviewer. Most reviews are rated on how the reviewer enjoyed the film overall, not exclusively on content. However, if the content really affects the reviewer's opinion and experience of the film, it will definitely affect the reviewer's overall rating.