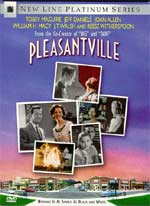 - for some thematic elements emphasizing sexuality, and for language.

David (Tobey MaGuire) and his sister, Jennifer (Reese Witherspoon), live with their divorced mother in a typical suburban home. Jennifer lives a life of promiscuity while David has no success with girls. Thus, David retreats to

his home after school and watches TV, especially "Pleasantville," a 1950s show where life is perfect and happy. In fact, he's seen it enough, he knows every trivial aspect of the show. One night, in an argument between the two, David and Jennifer break their only TV remote. Oddly, a TV repairman (Don Knotts) shows up immediately and gives them a new, high tech remote. When he leaves, the 2 teens argue over the remote again & are somehow transported into the show. David assumes the role of Bud while Jennifer assumes the role of Mary Sue. David loves his new situation, however Jennifer does not. The problems begin when they start influencing the innocence of the people in the show and everyday routines start to change. As the story progresses, more trouble arises & are people lose their innocence, they lose their black and white shades & turn color.

Pleasantville is the weirdest movie since The Truman Show (which i loved). But it's the most controversial i've seen in recent months! Filled with hidden messages & even obvious ones, this movie is both entertaining and possibly dangerous. Sexual references and themes range pretty high in this film. The language is typical PG-13 material, and the plotline is rather original.

I'll start off with the positives... The plot was pretty good. Another Twilight Zone-ish story where the impossible happens and it's more on the negative side than a positive (being trapped in a TV show). The acting was good, the characters were likable. The technique of color in the midst of a black and white setting was fantastic! It was a really neat idea! HOWEVER, the way it was used...
This brings us to the sex-ridden "loss of innocence" theme. Jennifer decides to introduce the teens of the town to premarital sex, and many implied elements are used (see the below listing). But the worst example of what I'm saying is when Jennifer explains to her mother what sex is. Although the details aren't heard, Betty comments, "Wow. Your father would never do that." Then Jen replies, "There are other ways to enjoy yourself-- without Dad." In the next scene,

Betty is shown in the bathtub (no nudity) and she initiates this very sinful act, and her facial expressions and repeated exclamations tell us what she is doing. Also, aside from this theme, the diner owner, Mr. Johnson (Jeff Daniels), paints a picture of Betty nude on the shop window. And David shows him a book of colorful paintings where some contain nudity.
The language is unnecessary with 1 "f" word thrown in at the end by David & Jennifer's "real" mother, along with a handful of uses of blasphemy scattered throughout the film.
The themes run ramped through the movie with riots and segregation of the colored people, leading to signs like "NO COLOREDS ALLOWED" in shop windows. The intent of the idea of the teenage promiscuity is unknown, but due to the explicit nature of such ideas, it is probably something you may have to interpret for yourself. The movie definitely has an Adam & Eve aspect to it, but tends to take the side of Adam & Eve who fell for temptation. One may even go as far as to see David and Jennifer as "serpents" among the innocent.
Overall, the movie is pretty good, however, due to its questionable nature & sex-ridden plot, I couldn't give this film more than 2 stars. - John (reviewed: 11/9/98)

Sex/Nudity: Heavy. There's a great deal of both in this film. Jen has sex with Skip in the car at lover's lane & we then see her shirt unbuttoned a little exposing the 1950s bra. In a following scene, all the cars at "Lover's Lane" are rocking back and forth with legs sprawled out the sides, implying sex. In another scene, Betty asks Jennifer what sex is & she explains (we don't hear the details). Then she tells Betty how she can find this satisfaction by herself. The next scene shows Betty in the bathtub (no nudity), "gratifying" herself and repeating the phrase \ "Omigosh" louder and louder with pleasured expressions on her face. As a result, the room turns color & the tree outside catches on fire. Later David shows Bill a book of paintings with color & some include male & female nudity. Bill later has an affair with Betty & paints her portrait nude on the store window.

Blood/Gore: A boy is punched & his lip is slightly bloody.

Violence: 1 punch, a bunch of people trash a diner, people riot. Disclaimer: All reviews are based solely on the opinions of the reviewer. Most reviews are rated on how the reviewer enjoyed the film overall, not exclusively on content. However, if the content really affects the reviewer's opinion and experience of the film, it will definitely affect the reviewer's overall rating.