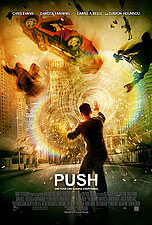 - for intense sequences of violence and action, brief strong language, smoking and a scene of teen drinking. 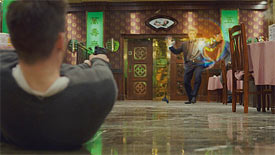 A riveting action-thriller, "Push" burrows deep into the deadly world of psychic espionage where artificially enhanced paranormal operatives have the ability to move objects with their minds, see the future, create new realities and kill without ever touching their victims. Against this setting, a young man (Chris Evans) and a teenage girl (Dakota Fanning) take on a clandestine agency in a race against time that will determine the future of civilization. (from Movieweb.com)

Science fiction action films are often an acquired taste. Many times, the story introduces the audience to an alternate, heightened reality that must be accepted -- no matter how outlandish -- to make the film work. For example, last year's Jumper was centered on the idea that there existed a select few human beings with the ability to teleport anywhere in the world they desired, while a secret group of people hunted these extraordinary people to eliminate them. With this Winter's Push, another novel is brought to the screen that showcases the supernatural gifts of people who can do anything, from seeing the future to shape changing items or moving objects with their mind. It's the kind of story that's certainly imaginative and creative, but begs for your suspension of disbelief. 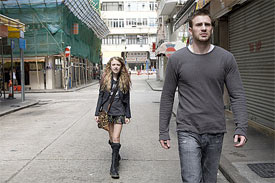 There probably isn't a whole lot different between the concept of X-Men and Push, except we're dropped pretty quickly into the middle of the world-according-to-Push and given pieces of the puzzle slowly, that isn't a simple one to grasp. And at the same time, director Paul McGuigan presents this world in a rather violent, action-based packaging that offers plenty of thrills and eye candy as the story unfolds. We're shown this alternate reality through the eyes of Nick, played by Chris Evans, who has the ability to move things with his mind (as did his dad who was killed for it while Nick was still very young), and we find him hiding out from the government when we meet him all grown up. It isn't long before Nick meets Cassie, played by Dakota Fanning, a young girl who is still developing her gift to see into the future. The intricate plot quickly adds character upon character and situation upon situation as the movie progresses, making for a pretty involved experience to absorb.

And as mentioned before, it's a violent story, and it feels rather gratuitous at times. There's a lot of gunplay, with the finale including the most carnage as a result of it. Earlier on, a "pusher" tricks a man into shooting himself in the head, and we see him do it in the distance after the fact (although it isn't bloody or gory). A couple characters have the ability to shatter objects (including cause internal bodily harm to people) when they scream, and in at least one instance, we see blood coming out of a person's ears, and later see the bruised and discolored body of a victim of this. Language is also pretty colorful, with at least one "f" word (and possibly another) and a scene hints at a possible sexual encounter in a hotel bathroom (we see some romantic kissing and holding before the scene changes). On top of that, the barely fourteen year old Dakota Fanning is seen in just a tiny miniskirt throughout the length of the movie, which seems a bit strange for her character and given her age. Aside from that, it's mostly your usual PG-13 fare, but it stays pretty intense from start to finish. 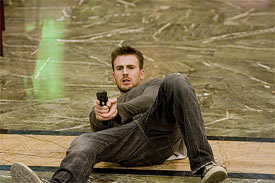 Evans and Fanning are good in their roles, and actually make for a good team... although it is a bit strange to see the young child star Fanning get drunk in one scene and utter the "s" word and "d*mn" on a couple of occasions. The unlikely pair do make Push fun to watch and are believable in their roles, so it's unfortunate that the content is as unnecessarily rough as it is. And this fact is what hurts Push the most. Camilla Belle is also good as Kira, a girl on the run from the government because of her abilities. And Djimon Hounsou is good, as usual, as the film's villain. Hong Kong serves as a great set for the film with wonderful cinematography and colors, and McGuigan doesn't skimp on the character development for the sake of cheap thrills.

So if you can stretch the imagination for a convoluted plot and sci-fi world, Push is your kind of movie. I often enjoy what films like this are trying to accomplish -- as Push does a fairly good job keeping things entertaining enough -- but the execution is just as important. There's really no need for movies to be as gratuitous in violence and language and Push is a reminder of this... in a bad way.

Sex/Nudity: Fourteen year old Cassie is seen in a very short skirt for the whole movie; Carver makes a comment to a thug about not wanting to be killed for a false memory of "screwing" the man's sister that doesn't exist (that Kira planted in the thug's mind); Nick joins Kira in the bathroom and they kiss passionately and he gropes her butt a bit before he closes the door and the scene ends, implying more happens; Kira shows some cleavage in a few scenes

Alcohol/Drugs: We hear that Cassie's mom was drugged by Division; Cassie draws a drink resembling a sign at a bar; Hook and others in a club have drinks; Cassie wants a drink to enhance her abilities (she's 13), but Nick won't let her; Later, we see Cassie buy a drink to hopefully enhance her abilities and then she burst into a room with an empty bottle and acting very, very drunk. She then sits down and falls asleep; We see some other random characters (including Carver) having some drinks, or mentioning having had some in the past, in other scenes in the film

Blood/Gore: We see a brief glimpse of a face with blood on it during an opening montage; We briefly see a needle enter Kira's arm while hospitalized by Division; Nick has some blood on his nose and shirt after being kicked in the face; Some screamers cause Nick to fall on the ground in pain and we see some blood coming from his ears and on his hands; We see Nick's bruised and discolored back (from internal injuries) and then see Teresa healing him, which causes his skin to ripple and move until his skin is clear and healed again; Kira plants a flashback in a thug's memory of a man being punched by another and the victim has a bloody face; We see some dried blood on Kira's shirt and later see some black blood from her nose; Nick has some scrapes and such on his face after a fight; Some black blood drips from Kira's nose into the sink; We see a dead man on the ground with some blood on his face; We see a shot of a dead screamer with his eyes wide open with a large bamboo rod impaling his neck (not really bloody); Victor has blood on his face after being beaten; Nick has more bloody scrapes and cuts on his face

Violence: Lots of action violence -- mostly gunplay. There are some "screamers" who cause high pitched sounds that cause things to shatter, including internal injuries or ear damage; Carver causes a thug to shoot himself by implanting thoughts in his mind. Later, the same thing happens to another character; Carver and Kira cause a series of thugs to shoot others by mind control. They then have those characters committ suicide by leaping off a high roof; Cassie often tells Nick she sees death in the future for both of them; Nick, as a boy, sees his father taken away by Division (or possibly killed right in front of him); Characters shoot at other characters (sometimes hitting and resulting in death); A pole is thrown into a screamer's neck, killing him; Carver causes a couple shooters to shoot each other; Victor uses his powers to throw Nick violently around a room; Nick uses his powers to hold some people at gun point (the guns float); And other assorted action violence. Disclaimer: All reviews are based solely on the opinions of the reviewer. Most reviews are rated on how the reviewer enjoyed the film overall, not exclusively on content. However, if the content really affects the reviewer's opinion and experience of the film, it will definitely affect the reviewer's overall rating.