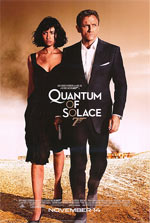 - for intense sequences of violence and action, and some sexual content. 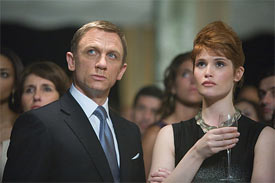 Pursuing his determination to uncover the truth, Bond and M (Judi Dench) interrogate Mr White (Jesper Christensen) who reveals the organisation which blackmailed Vesper is far more complex and dangerous than anyone had imagined. Forensic intelligence links an Mi6 traitor to a bank account in Haiti where a case of mistaken identity introduces Bond to the beautiful but feisty Camille (Olga Kurylenko), a woman who has her own vendetta. Camille leads Bond straight to Dominic Greene (Mathieu Amalric), a ruthless business man and major force within the mysterious organisation... (from MovieWeb.com)

Two years ago, Daniel Craig suited up as the latest James Bond in Casino Royale, surprising movie fans everywhere with a more intelligent, more human Bond portrayal. Martin Campbell, who had directed Pierce Brosnan's first run, GoldenEye, returned to the franchise to reboot it once again, delivering a slick action film that dug deep with more heart and less camp. For 2008, Bond is back again, as is Craig and much of the cast from Casino Royale, for a continuation of the story established two years ago. However, Campbell doesn't return. Instead, dramatic director Marc Forster (Finding Neverland, Stranger Than Fiction, Monster's Ball) is at the helm, bringing a much different Bond than expected. 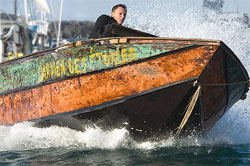 As a continuation of Casino Royale, Quantum Of Solace has the style of a completely separate film. More like a Bourne film directed by Paul Greengrass (with much less action film experience), Quantum Of Solace tries harder to be something it more or less isn't, while attempting to tie up the loose ends that were left by the previous film. Craig still makes a great Bond, and Judi Dench is as wonderful as ever as M, but it's really Forster's direction that ultimately hurts the movie. Where each action sequence in Casino Royale seemed to be carefully and meticulously orchestrated, such sequences in Quantum Of Solace feel either incomplete, rushed, or done better before in other movies (A rooftop chase and hand-to-hand fight are similar to something seen - and done better - in The Bourne Ultimatum, for example). It becomes sadly evident in the opening car chase that Forster doesn't really know how to direct these kinds of film moments. This sets the tone for the action in Quantum, and for a Bond movie, strong action scenes are extremely vital. To contrast, Campbell brought to the screen a breathtaking foot chase between Bond and a bomb baker at the beginning of Casino Royale that not only raised the bar for similar kinds of action scenes, but was wonderfully directed and orchestrated. Forster directs a similar foot chase in Quantum that often cuts much, much too quickly from moment to moment, and when the characters inevitably meet for a battle, the only breathtaking feeling you're liable to experience is how exhausting it is trying to keep up with whose flailing limbs are whose as they beat on each other. It's the kind of disorienting mayhem that's more frustrating to watch than entertaining, and it's unfortunate because none of that existed in Casino Royale. If a film is supposed to continue a story, why would you want a different feel from one part to the next?

French actor Mathieu Amalric steps in as the latest Bond villain. Sadly, he's not nearly as intriguing or intense as Mads Mikkelsen's Le Chiffre. Amalric seems more like an arrogant jerk with power than a classic sinister Bond nemesis. However, Amalric's Dominic Greene feels far more real than many of the villains prior to Le Chriffre. Forster's take on the new Bond world often does feel even more real - and less like your usual Bond film - than Royale, and part of this is due to the absence of gadgets, silly dialog, or outrageous villains or set pieces. But Forster gets carried away more than once by inserting strange, almost surreal moments. The worst example of this being when Bond runs into Greene's men while at an opera and the actions slows and cuts confusingly while images from the opera are spliced in with the action and the music is pulled into the foreground. Perhaps the director was having Finding Neverland flashbacks, but it just doesn't work for a James Bond film. The plot for Quantum Of Solace is probably even more complicated than Casino Royale's, but references it so much that anyone who hasn't seen the previous film is likely to be lost while watching this one (not that there's anything wrong with that - I, for one, loved that this picked up where Royale left off). But with all of the changes and misdirection of the action sequences, Quantum Of Solace is still an entertaining film, and fans of Royale are likely to enjoy the continuation of the story started with Craig's first outing. Where Forster does shine as a director, however, is not surprisingly during the more dramatic sequences and character-driven moments. Still, everything about Quantum pales in comparison to Royale, but Forster deserves credit where credit is due. 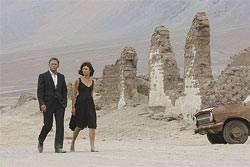 The content of Quantum Of Solace follows more of what Royale began. There's a handful of profanity, the worst being 2 "s" words and an unnecessary use of "Chr-st" by M. Sexual content is surprisingly limited to a few references to Camille having slept with Greene (prior to the events of the film) and a very brief scene where Bond is in bed with Fields after having slept together. It's refreshing that Bond's womanizing ways have been toned down, but it's unfortunately most likely something that is only so because of the nature of the story. And, sadly, the series' signature dancing nude women silhouettes return in the opening credits, a tradition that we could live without. In the end, violence is one of the film's biggest problems as was the case with Casino Royale, where most of it involves deaths by way of shooting and bloodshed caused by such moments as well as a Jason Bourn-esque knife fight. And with Bond being torn between duty to serve and protect and finding revenge, much of the film carries with it this bitter need for vengeance. At the same time, there's a meaningful exchange between 007 and a dying character where the victim pleads with him to forgive someone who had wronged James, as well as himself, which brought into the equation a nice human element that we all can relate to have struggled with.

When all is said and done, Quantum Of Solace feels more like the sequel that The Bourne Supremacy was for The Bourne Identity, where sloppy action editing nearly ruins what was wonderfully established in the film before it. Marc Forster would do best to turn the Bond film making over to someone else, as well as retire from action directing, while hopefully we can see more of Daniel Craig as James Bond, as well as this more serious, no-nonsense, more human side of the character. Casino Royale fans will have to lower their expectations while those sensitive to any of the aforementioned content will want to take a look at the usual content summaries below before seeing this one. Far from a bad film, but also pretty distant from the sequel that was hoped for and expected, Quantum Of Solace is a good James Bond film, but certainly not a great one.

Sex/Nudity: The classic girl silhouettes return during the opening credits and with that we see what look like shadowed nude female figures dancing through sand and such; Greene tries to give Camille to a man as a gift (sexually). He also makes a comment to her about her sleeping with him (not seen); We see Bond walking around his hotel room shirtless and then entering a room where he joins Fields who is naked in bed. We see the side of her bare back and he kisses her there, and then pulls her back onto the bed and the scene ends (it's quite brief); We see a the dead body of a nude woman completely covered in black liquid (therefore the nudity is not explicit); A man tries to rape a woman and we hear her screaming and he tears her dress. We then see her flee from on top of the bed, clothed, but we may get a brief shot up her dress (it's dark and hard to tell for sure if we see explicit nudity or not)

Alcohol/Drugs: We see Bond prominently drinking his alcoholic collaboration from Casino Royale where he appears to be a bit drunk as we learn he's had six of them, but the scene is brief; We see Felix drinking beer at a bar; We see others drinking at a bar as well as some other characters drinking throughout the duration of the film

Blood/Gore: We see blood dried on the side of Bond's face; We briefly see the bullet wound in Mr. White's leg as they wrap it up; We briefly see a photograph that shows what looks like a man's lips having been cut off and perhaps his eyelids (his face is bloodied and disfigured; There is some blood on the ground after a man was shot; Bond fights a man who has a knife. While the fight is quick, we see a knife going into the man somewhere and then blood on his neck (his hand covers whatever wound he has) and there's blood on his face. Bond then wraps up a knife wound on his arm and wipes blood off his face; A woman has some light burn scarring on her back; We see an actress preparing for a role in an opera with a bloody cut being painted onto her forehead; We see a scene from the opera where a woman kneels over a man with a knife in her hand and he's covered in fake blood; A man is found beaten with a bloody face (but still alive) inside a car trunk. He's then shot (we briefly see this) and we see more blood on their face and hands and clothing, as well as a person who holds them; We see dried blood on Bond's shirt as well as some scrapes on his and Camille's face; We see some blood on a woman during a fight as well as on a man she is fighting. We briefly see her jab what looks like a knife into the man's back; We see two man fighting and both get a little bloody. One man's shoe is hit with an axe and we see some blood come from that and is also on the axe

Violence: Lots of action violence (especially mentioned above under Blood/Gore), including some explosions, many people shot and killed or wounded, a violent knife fight, a woman is assaulted and is almost raped before being interrupted (and rescued), we see a man is shot and killed from behind, a man is tripped to fall down stairs, we see a man underwater who has drowned, Bond shoots and kills a man through the windshield of a car, a person is shot while driving and the car goes off a cliff, a big building catches on fire and portions of it explode and burst into flames, a person is left in the desert and we later learn they were shot in the head and killed (not seen), a person dies by being drowned in oil, and many other acts of action violence... Disclaimer: All reviews are based solely on the opinions of the reviewer. Most reviews are rated on how the reviewer enjoyed the film overall, not exclusively on content. However, if the content really affects the reviewer's opinion and experience of the film, it will definitely affect the reviewer's overall rating.