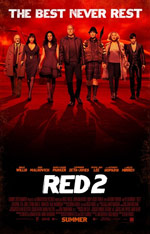 In RED 2, the high-octane action-comedy sequel to the worldwide sleeper hit, retired black-ops CIA agent Frank Moses reunites his unlikely team of elite operatives for a global quest to track down a missing, next-generation lethal device that can change the balance of world power. To succeed, they'll need to survive an army of relentless assassins, ruthless terrorists and power-crazed government officials, all eager to get their hands on the technologically advanced super weapon. The mission takes Frank and his motley crew to Paris, London and Moscow. Outgunned and outmanned, they have only their cunning wits, their old-school skills, and each other to rely on as they try to save the world-and stay alive in the process. (from Red-TheMovie.com) 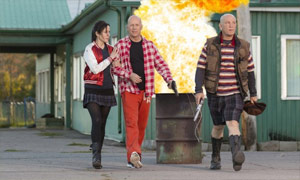 In 2010, audiences were taken by surprise when DC Comics' RED came to the big screen in a smart, fun, and hilarious action comedy. Bruce Willis plays a retired CIA operative named Frank Moses who is hunted by the Agency when an up-and-coming successor to Willis is assigned to hunt him, no questions asked. Frank and a few of his old pals team up to find out exactly what is going on and set things right. It's a very entertaining film with slick direction and just the right cool and jazzy score from Christophe Beck to give the movie the right feel to keep the festivities light and amusing. Now, three years later, director Dean Parisot takes over, replacing Robert Schwentke, and Beck is swapped as composer for Alan Silvestri. Sadly, RED 2 never quite reaches the levels that its predecessor achieved.

Silvestri's score for 1985's Back to the Future is still one of my all-time favorite. However, it seems like Silvestri hasn't quite been able to make many truly memorable scores since then. Unfortunately, RED 2 fares no better than other sequels Silvestri has scored (The Mummy Returns comes to mind--not being able to hold a candle to Jerry Goldsmith's), never matching or besting the score of the original film. Why does this matter, you may wonder? A score can make or break a film, and mood and tone is what RED had going for it from scene one where we saw Frank mulling around his house bored out of his mind with retired life. It's kind of like how David Holme's jazzy and fun scores for Ocean's 11 and its two sequels added a lot to the vibe of the series. Also, Beck's score was throughout the entire movie of RED. Here, the score is so infrequent that it never feels like the same universe that Schwentke had established. And the first movie used the music to make the violence less serious. The brawl between Frank and Cooper (Karl Urban's character) wouldn't have been the same without "Back in the Saddle" playing and sudden cuts to Sarah sitting in a cafeteria reading a magazine. It was comedic gold. 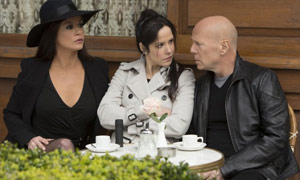 And that's biggest problem Parisot has here. One of my favorite comedies of all time is Galaxy Quest, a film by Parisot, and I was really surprised by how he seemed to flounder a bit here. If scenes weren't cutting so fast like it'd been edited in Vine on a smart phone, other scenes just dragged without a hint of musical accompaniment to move it along a bit. Beck's score was heroic, thrilling, smooth and even light and funny at times, and Silvestri sits out most of the opportunities to add something (save for an incredible fight scene with Byung-hun Lee's Han... Which probably wasn't even his score). Because the mood isn't light where it needs it most, the violence feels all that more gritty and brutal. There's a great deal of stabbings, shootings and beatings, and it's just too serious too often. When we meet Cooper in RED as he's giving his wife parental advice via phone while staging a man's murder as a CIA cover-up, it's done in a tongue-in-cheek way. We get a glimpse of Victoria doing something similarly while on the phone with Frank in RED 2, but the governmental clean-up man, Jack, who's played by Neal McDonough, is never likable nor as fun to watch as Urban was as Cooper. While it's good that RED 2 doesn't try to copy RED too much, it sometimes makes you wonder in anyone working on RED 2 had even seen the first movie (I realize the cell phone we see Marvin using is some bizarre hybrid of about 10 phones, but he's SO against cell phones in the first movie that it seems completely out of character to see him using one in this one!).

When the plot isn't being too convoluted to follow, the best thing RED 2 has going for it is seeing the characters again. And while Malkovitch's burned out, nutty Marvin seems oddly quieter and less quirky this time, having the gang back together again--in some form--is still a delight. Adding Han to the team, in some form, is a nice addition, as well as Anthony Hopkins in a delightfully looney role, and Catherine Zeta-Jones as a foil for Sarah. It was also nice to see Byung-hun Lee in another action movie outside the G.I. Joe franchise, and his action scenes were highly entertaining. Some of the action sequences are really impressive and fun, too, but the violence is definitely amped up this time. Expect to see people stabbed and shot to death several times throughout the course of the movie. 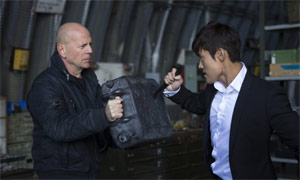 With that said, I'd say the content is a hard PG-13, with the violence being the biggest aspect. Knives seem to be a common tool, and some scenes narrowly escape being more violent than they turn out to be (like Sarah saving a guy from being tortured with a knife at the last second), while other scenes show characters being stabbed quickly but with lethal results. There are also some brutal fight scenes where Han clears a convenience store of officers using martial artist and the door of a mini fridge, and when he and Frank face-off later. And a SWAT team of sorts tries to subdue Frank with violent results (including showing a man get hung by the neck with the strap of his own rifle). Language isn't constant, but there are a handful of "S" words and some blasphemy. I also thought I might have heard the "F" word once during a tense scene from a miscellaneous character before they got shot, but it wasn't clear. Sexual content is limited to a couple mild remarks and some passionate kissing (which is usually comedic), but it's not particularly racy or vulgar. Lastly, if you hate large spiders, there are two brief scenes containing them. First, Sarah finds a jar in the back of Marvin's car with a couple tarantulas inside crawling on the walls of the jar and she holds it up for a second before putting it back down out of sight. Later, we see Marvin hold the jar up for a second to threaten a guy with while he's interrogating him. Thankfully, that remains the extent of them in the movie.

Overall, while I was pretty disappointed that RED 2 didn't follow the feel of what made RED so enjoyable, it's still fun to see these characters again. There's already been talk of a RED 3 (although I'm sure that hinges on the box office success of this entry), and if it happens, I'd love to see Schwentke and Beck come back to the team once again. I can see myself warming up to this movie with repeat viewings, but my initial feeling is that it falls very short of what made RED the hit that it was.

Sex/Nudity: While antagonizing Frank, Jack tells him he likes to watch Sarah shave her legs; Jack knocks on a door and Victoria breathlessly and suggestively answers the door saying she's busy, but it turns out she had killed some people in the room; We see the top of Han's bare butt when they make him strip down to nothing to make sure he's unarmed; Katja passionately kisses Frank and Marvin mentions that she is Frank's Kryptonite (a weakness of Frank's); Sarah sensually talks to and kisses The Frog to try to persuade him to help them (and he's visibly flustered afterwards); Sarah passionately kisses a Russian soldier so that they wouldn't have to kill him; While Han is trying to gun them down, Marvin spoons behind Frank as they are pinned to the ground. Frank asks if that's a stick of dynamite in his pocket and Marvin confirms that it actually is.

Alcohol/Drugs: We hear about Marvin's former treatments of LSD for 11 years; We hear Marvin drugged a military officer to get information out of him; Ivan offers some people suicide pills in case they're caught, but they don't take them; We see people drinking in a cafe and we see The Frog slurping wine; We see Victoria and Sarah with wine on a plane and Han takes a glass and drinks some; We see people toasting with vodka; Jack drinks from wine from a bottle in a victim's place; We see Sarah and Frank sitting at a bar in a restaurant; Frank and Katja share glasses of wine and then Frank passes out from being drugged; A man gasses a group of people, shocking their nervous system.

Blood/Gore: We see some blood on a few dead bodies on a hotel room floor; We see The Frog covered in some slightly bloody cuts and abrasions after being thrown from a motorcycle; When Frank dumps the contents of a safety deposit box onto a table, we see what appears to be a severed hand with wounds on it, but it might have been a fake hand or a glove (it's not focused on); A man has some blood on his face when we see him lying dead in his home; Frank and Han fight and we see cuts and blood on both of their faces; A woman is shot and we briefly see a little bit of blood on her dark-colored clothes.