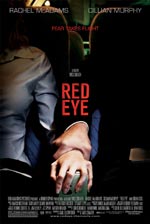 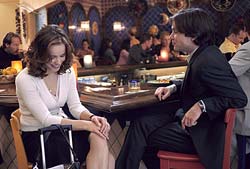 From director Wes Craven (the Scream franchise) comes Red Eye, a suspense thriller at 30,000 feet, starring Rachel McAdams (The Notebook, Wedding Crashers) and Cillian Murphy (Batman Begins, 28 Days Later). Lisa Reisert (Rachel McAdams) hates to fly, but the terror that awaits her on the night flight to Miami has nothing to do with a fear of flying. Upon boarding the plane, Lisa is pleasantly surprised to find that she is seated next to Jackson (Cillian Murphy), the seemingly charming man with whom she had shared a drink -- and perhaps even a brief flirtation -- in the airport terminal. But moments after takeoff, Jackson drops his façade and menacingly reveals the real reason hes on board: He is an operative in a plot to kill the Deputy Secretary of Homeland Security...and Lisa is the key to its success. If she refuses to cooperate, her own father will be killed by an assassin awaiting a call from Jackson. Trapped within the confines of a jet at 30,000 feet, Lisa has nowhere to run and no way to summon help without endangering her father, her fellow passengers and her own life. As the miles tick by, Lisa knows she is running out of time as she desperately looks for a way to thwart her ruthless captor and stop a terrible murder... (from MovieWeb.com)

Wes Craven has earned a name that has become synonymous with the horror film genre. Making such films in recent decades as Nightmare On Elm Street (and its seventh sequel), and the three Scream installments, a film like Red Eye may seem like a bit of a departure for him (although, in all fairness, it wouldn't be the first time). Luckily, it does stray from the norm for Craven, and what results is an intense and engaging thriller that's wonderfully acted.

I'm not one who frequents films of this genre -- honestly, because most are slashers or riddled with content beyond what my stomach can take -- but Red Eye, and the buzz surrounding it, caught my attention. Although lead actor Cillian Murphy has been making films for eight years, mostly low-profile indies, I'd first heard of the actor via this Summer's Batman Begins. His intense delivery and unique looks make Murphy an interesting character to watch. Red Eye is also my first experience of Rachel McAdams who has previously been seen in films like Mean Girls, The Notebook, and this year's The Wedding Crashers. McAdams has a sweet and down-to-earth personality that played well for her character as Lisa in Red Eye. In fact, some of the film's strongest moments are when Lisa and Jackson (played by Murphy) are just sitting there talking. 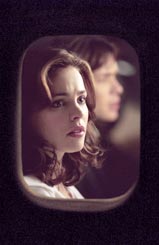 Craven and company keep the audience engaged for all of Red Eye. Simultaneously when the plane to Miami takes off in the film, so does the plot, soaring on its tense and suspenseful wings. While some plot elements may be predictable, and at times familiar and riding the fence of cliché, Craven keeps things interesting even up until the final moments.

And while language is still problematic (with at least 1 "f" word, a handful of "s" words, and a few others), violence is the film's biggest red flag. One of the most intense and brutal moments involves a character being stabbed in the throat with a pen. We briefly see some blood on the character's shirt as well as several views of the writing utensil protruding from the wound (upon pulling it out, the character wraps a scarf around their neck to conceal it). Otherwise, another character is hit by a car and we see them lying with a pool of blood beneath their head, and we see two bloody wounds on a person's shirt after they've been shot. Jackson manhandles Lisa several times throughout the film's duration, including head-butting her (knocking her out), and roughing her up (non-sexually) in the plane's bathroom. It's all played for suspense, but is very heavy for younger moviegoers, so I strongly suggest they be left out of viewing this one.

With all accounted for, I found Red Eye to be a pretty entertaining ride with some redeemable family elements (even including a sequence reminiscent of a moment from the climax of Frequency), but is ultimately still rather rough around the edges. Some toning-down of the language and violence would have helped increase its audience, but perhaps waiting to see the film on an edited DVD service (from the likes of CleanFilms.com or ClearPlay.com) would be your best bet. It's definitely not a family film, so if you decide to see the film despite its content, it's suggested that you leave the kids at home.

Sex/Nudity: We see Lisa in her bra when she removes her jacket in the ladies room to clean coffee stains from it; Jackson forcefully throws Lisa into the bathroom on the plane where he threatens her for awhile. A little girl points out to the stewardesses that they're in there, and they assume for sexual reasons. Before leaving the room, Jackson thanks Lisa "for the quickie" (a double meaning because they talked and it looks to others like they were doing something sexual). The stewardesses scold Jackson that it's "not a motel," and he winks. Later, a stewardess calls Jackson "trash" when she comes by to collect people's garbage.

Alcohol/Drugs: Jackson and Lisa get drinks at a bar; The Deputy Secretary of Homeland Security has alcohol in his room; some references to cocktail drinks are made

Blood/Gore: We see a non-bloody or graphic scar on Lisa's chest in the airport bathroom; Jackson suddenly head-butts Lisa, causing a trickle of blood to run down his forehead, which he wipes off; A character is stabbed in the throat with a pen. We briefly see some blood on the character's shirt as well as several views of the writing utensil protruding from the wound (upon pulling it out, the character wraps a scarf around it to conceal it); A man shoots at an SUV and is struck by the vehicle, killing them. We then see the body with bloody scrapes on it and a pool of blood beneath their head; We see a character pull a black heeled shoe from their leg (with what looked like a tiny bit of blood); Lisa has some blood on her forehead and some scrapes on her body; A character has two bloody wounds in their clothing after they've been shot

Violence: Jackson head-butts Lisa; Jackson manhandles Lisa a lot, throwing her around, squeezing her face, threatening her, etc; A character is stabbed in the throat with a pen; A person is killed when hit by an SUV; We see a room blow up from a missile; A character is knocked unconscious; A character chases another around in an attempt to kill them; We are given a hint that a character may have been raped in the past; A person is shot to death, etc; See also "Blood/Gore" Disclaimer: All reviews are based solely on the opinions of the reviewer. Most reviews are rated on how the reviewer enjoyed the film overall, not exclusively on content. However, if the content really affects the reviewer's opinion and experience of the film, it will definitely affect the reviewer's overall rating.