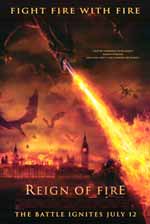 In present-day London, England, a 12-year-old boy named Quinn discovers a dormant fire-breathing dragon underground at a drilling site his mother works at. Now awakened, the dragon and its offspring wreak havoc on the Earth, scorching everything and killing everyone in its path. 20 years later, an adult Quinn (Christian Bale) helps run a small human community trying to remain alive in their new world. When the eccentric hard-nosed Van Zan (Matthew McConaughey) from the United States arrives with the remainder of his troops, a power struggle ensues as Van Zan desires to use the community as part of his arsenal to take down the dominating creatures.

Some of the most classic films of yesteryears were "monster movies." You had the old black and white Blob (not the graphic remake), War of the Worlds, The Thing (not the graphic remake), etc. In recent years such monster movies have been remade or created with a much different approach and vision. Finding a monster movie that isn't saturated with blood and gore these days is about as hard as it is to find a good original one that hasn't been remade many times over. In 2002, Rob Bowman's dragon-slaying action/adventure flick Reign of Fire has more of that non-graphic classic monster movie approach, but is yet not without its flaws.

Reign of Fire is hardly for everyone. Too intense for the young ones and too simple for the more cerebral of moviegoers, Reign has a promising premise with an imperfect execution in filmmaking. I wasn't exactly sure what to expect from the film as most critics seemed split down the middle between liking it and hating it. What I received, however, was a visually captivating thrill-ride that seems to deliberately leave some reason at the door. While many (and I do mean many) questions regarding the plot do go unanswered, it's a wonder if the filmmakers just expected us -- the audience -- not to wonder about them and forgive the possible holes, or to not bother taking the time to explain and sweat the little details to keep the film moving at a decent pace and developing the characters. For me, I found the film too interesting and fun in it's story and suspenseful nature to worry about little details that should have been explained.

To whine about such insignificant details would prove to be too picky and stubborn to not just sit back, relax, and enjoy the show.

With a sense of Jurassic Park that hasn't come to the screen since those films debuted in the early 90's, Reign of Fire takes a unique and original idea to the big screen: dragons take over the planet and become the dominating species and humans fight back to try to save their race. It's dark, due to its post-apocalyptic setting, but the characters shaped by the story are what help make Reign as enjoyable as it is. Some much-needed humor is present through a hilarious ode to Star Wars and Quinn's best friend Creedy.

Content does not go away unnoticed. While the graphic violence is kept to just the brief glimpses of small cuts and burns, the dragons' victims' deaths go mostly unseen or are merely consumed by a fireball without any remains. The ambiguity is refreshing in our show-all society these days, offering more of that throwback feeling of the classic monster movies. Language is present, but milder compared to the genre. The acting performances are fitting, with Matthew McConaughey's tough, no nonsense gruff soldier attitude versus the leadership of the more sensitive Quinn from Christian Bale. Most of the supporting cast does their job with a few here and there standing out from the rest.

If you can easily forgive a few weak plot details and some simple dialog and just shut your brain off for this thrilling popcorn flick, you may just find a Reign of Fire among your list of favorites for 2002.

Alcohol/Drugs: Some people have beer at the drilling site.

Blood/Gore: We see a little bit of blood on a woman's face who's just been killed. A man who's just been burned has some blood on the side of his head. Quinn and Van Zan have some blood on their faces after a fight. We then see some blood droplets drip into a sink full of water as Quinn cleans a bloody cut on his arm. A dragon that has been killed has some gaping wounds. Later we see Quinn take an egg from its womb that is covered in a goo-like blood. We see a little girl with what looked like a burned arm and a little bit of blood. Van Zan has some bloody cuts on his bald head.

Violence: Dragons burning people in a non-graphic fashion (they usually are just consumed in the fire). Dragons eating people in a non-graphic quick swoop. A fist-fight between two men. Some dragons are killed, etc. Disclaimer: All reviews are based solely on the opinions of the reviewer. Most reviews are rated on how the reviewer enjoyed the film overall, not exclusively on content. However, if the content really affects the reviewer's opinion and experience of the film, it will definitely affect the reviewer's overall rating.