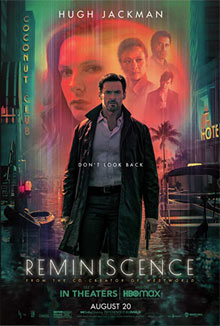 Nick Bannister, a private investigator of the mind, navigates the alluring world of the past when his life is changed by new client Mae. A simple case becomes an obsession after she disappears and he fights to learn the truth about her. (from IMDB)

I recently watched a movie that released several years ago that I had apparently decided to skip altogether at the time. As I was watching it, I kept thinking how enjoyable it was and I wondered how it was that I'd missed it. After it was over, I looked the movie up and saw that it had gotten pretty harsh reviews from critics and I just didn't quite get why. I enjoyed it. Upon seeing previews for the new Hugh Jackman-led thriller, Reminiscence, I thought it was right up my alley, but the wind was knocked out of my proverbial sails when I saw how dismal the critic reviews were. Still, curiosity got the better of me, and I thought about my streaming experience - with liking a movie that had gotten poor reviews - when I decided to get my tickets.

Reminiscence takes place in the future, after war caused Miami to become largely flooded, and the heat of the sun forced people to spend the bulk of their time awake at night when the sun was down. Hugh Jackman plays Nick, a Naval veteran who makes a living helping people relive their favorite memories through a unique technology he's developed, called "Reminiscence," with a tech named Watts (played by Thandiwe Newton). But the structure of the story - from the underground mob themes, the nighttime setting and Jackman's narration of the film - gives it a modern noir feel. It's as if the filmmakers set out to make a sci-fi film for Humphrey Bogart, without Bogart. Jackman is great in the role, channeling a bit of his persona from The Prestige, while the movie serves as a mystery of the mind, with the majority of the clues being hidden in people's memories. One of the film's biggest criticisms is its lack of originality. While I can't say I have felt like I've seen this exact premise or movie before, it does have elements of other movies - like Minority Report or Inception (and some have said Blade Runner). It also never gets quite as intense or memorable as those films, but director Lisa Joy and her able cast deliver a good "whoddunnit?" caper that actually feels like an old movie. (Maybe if this were presented in black and white, it would have sold the idea better for some?) And although it's set in the future, with flooded streets, boats as transports instead of cars, and life at night being preferred over day, Joy keeps things surprisingly grounded. There are times when the sci-fi elements pull you out of that grounding (like characters being hooked on a make believe narcotic, for example), but there are some pretty great visuals in the mix, especially a brutal fight that breaks out in a flooded building.

Rebecca Ferguson, probably most notable for her roles in the two most recent Mission: Impossible films, Rogue Nation and Fallout, is mysterious and alluring as the film's femme fatale, Mae - the object of Nick's affection. Newton, as Nick's assistant Watts, is good as the grizzled, somewhat grumpy partner. She doesn't like Mae from the start and it definitely complicates things. Watts may have a prickly demeanor, but the two work well together, and she proves to be a loyal friend. While Nick isn't really a detective of sorts, he uses the Reminiscence technology to help the police out with cases on a freelance basis. It makes for an interesting premise that keeps the plot involving Mae moving forward in mysterious ways. Nick's investigations end up leading him into a few violent situations where his Navy background helps him out. But the story is a mature one that involves romance (and lust), obsession, mobsters, drugs, crooked cops and murder. It definitely makes good on the PG-13 rating, but it isn't nearly as brutal or vulgar as it could have been (especially if they had decided to go the R-rated route with it). 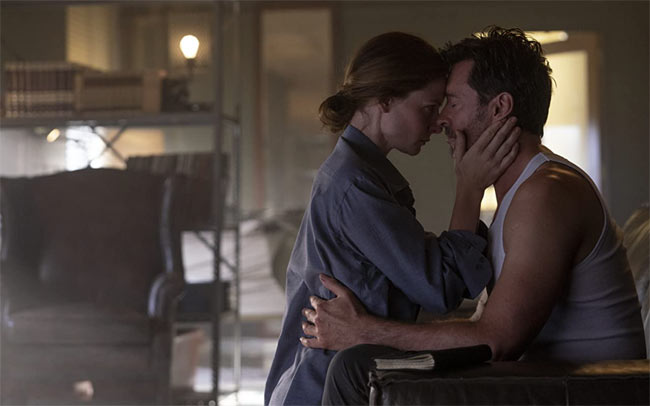 With that said, profanity isn't pervasive, but most of the movie's language seems to come most often from Watts, with almost 20 uses of the "S" word spread throughout the film, 1 possible muffled "F" word from Nick (while he's struggling with a mobster), and quite a few other cuss words, including blasphemy (like "g*dd*mn" and "J-sus Chr-st"). There isn't any explicit nudity, but Mae disrobes in front of Nick to get prepped for the Reminiscence machine (we don't see anything, just his uncomfortable reactions), and we see her bare back as she changes during a memory projected in the room. In many scenes in the film, however, she wears a very low-cut dress that dips down her front pretty much to her navel. There's also one scene where the two succumb to their attraction to each other and he peels off his shirt as she straddles him and they passionately kiss (the scene ends soon after). Other shots show Mae just in a bed sheet or something without any explicit nudity. There are a few scenes of violence, including a flashback to a man being doused in lighter fluid and then set on fire. We see many scenes of the man with a scarred head with part of one ear missing. There's also a shootout sequence where several characters are shot quickly (or in slow motion), but there isn't a lot of blood shown. One victim, however, is shown slumped over, dying from his injuries with some blood coming from his mouth, and he's then shot and killed off screen. In the same shootout scene, Nick and a thug struggle over a syringe, which he tries to stick in the thug's eye. He finally overpowers the man, and you see Nick apply the finishing move just off screen. It's not explicit, but it's enough to feel the impact of what he's done. Later in the movie, we see a woman get violently stabbed and thrown off a dock into water. No blood is shown, but it's still a rough moment. Lastly, there are a lot of references to a fictional drug that some mobs spread around the streets, and a character is referenced as being addicted to it a few times. 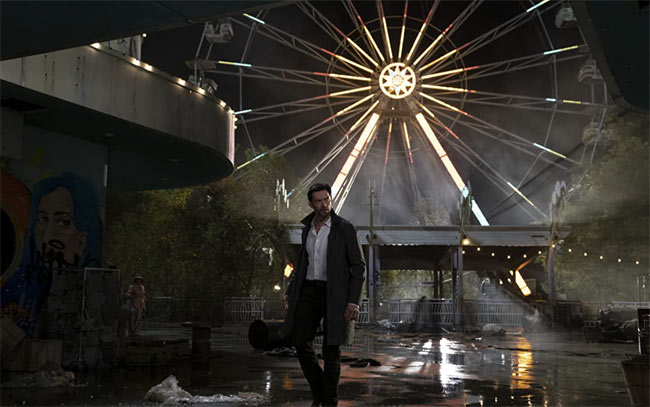 Reminiscence is a flawed sci-fi mystery that channels the classic film noir feel nicely, but its unique set pieces and solid cast also elevate the movie. Its rougher content makes it difficult to recommend, but it's ultimately a decent thriller that doesn't really deserve all the negative reception it's been getting.

Sex/Nudity: As we see a montage of people who use Reminiscence to relive their memories, we briefly see two men holding hands and looking lovingly at each other; We see a memory of a woman in a nightgown in bed with a man. We see clips of this several times; While Nick is watching Mae's memory of her looking for her keys, he sees her reach under a dresser and brush a pink vibrator. Later, he teases her about it, calling it her "neck massager;" Mae removes her dress in front of Nick to get into the machine. He looks away but we don't see any nudity. In one of her memories, she removes her shirt to change clothes and we see her bare back. Nick turns away to give her privacy; Mae often wears revealing dresses that are low cut in the front down practically to her navel; Nick and Mae passionately kiss as she straddles him and he removes his shirt. The scene cuts away as they continue to passionately kiss with her on his lap; We see several scenes of the two lying next to each other and talking; Some thugs comment that a woman provides sexual favors; We learn that a married man had an affair with a woman; A man watches a woman passionately kissing another man in a memory. He then walks into the projection and imagines he's the one being kissed.

Alcohol/Drugs: There are a lot of references to a fictional drug that some mobs spread around the streets, and a character is referenced as being addicted to it a few times; Nick visits a bar and people are there having drinks; A person overdoes on drugs before jumping to their death.

Blood/Gore: We see a little blood on men who are shot during a shootout; A man who's been shot has some blood on him as a woman tells him he's going to die a slow, horrible death. She then shoots him off screen, killing him; A man has a very scarred bald head and part of his ear missing.

Violence: (Some spoilers ahead) Nick's head is repeatedly held underwater in a fish tank to torture him. At one point, a bullet pierces the tank and we see it wiz by his face; A shootout breaks out in a bar and several men ar shot and killed. One is seen dying and is shot and killed off screen; Two men have a violent fight across a rooftop and into a building. One man's arm is caught in a piano and it sinks through the floor into water. One of the men goes after him to free him but is kicked and pushed downward into the water. He imagines someone reaching for him and then swims out to safety; A man's memory shows him being doused with lighter fluid and set on fire as he screams. We see his body in the Reminiscence machine convulsing. The machine is then turned up to a higher voltage and he's left in the machine to experience that memory repeatedly; A woman grabs several drugs and stuffs them in her mouth and then jumps off a platform to her death (we don't see the impact); A woman is brutally stabbed and thrown off a dock into water. (No blood is seen) A man tries to chase a child to kill it, but the child is rescued. And other action violence. Disclaimer: All reviews are based solely on the opinions of the reviewer. Most reviews are rated on how the reviewer enjoyed the film overall, not exclusively on content. However, if the content really affects the reviewer's opinion and experience of the film, it will definitely affect the reviewer's overall rating.