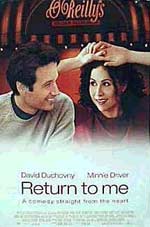 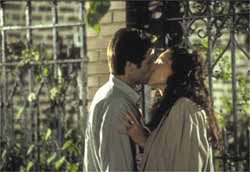 When Bob Rueland (David Duchovny) loses his wife in a car accident, his whole world is turned upside down. But when a local girl named Grace (Minnie Driver) is in need of a heart transplant, his wife's death is just in time. A year passes and Bob still is grieving the loss of his wife, and Grace's friends are trying to find her a mate. After both experiencing bad dates, Grace and Bob meet by chance, and a romance blossoms. As their relationship advances, Grace and Bob have encounter some difficulties that they must overcome.

Return to Me is the first definite "yes" of the new millenium. In the words of Larry the Cucumber, "I laughed, I cried, it moved me, Bob." Most comedies these days are either not comedies at all, or laced with so much trash, you feel like you need a shower after watching the movie. But Return to Me, with all its flaws, is a successful creation of cinematography and entertainment.

The acting is quality and the characters are very likable. You really feel for Bob and Grace and what they go through. The characters are well-developed and realistic. The story isn't completely plausible but I don't think that's necessary. I believe movies should have some lee-way to venture into the realm of fantasy to a certain extent. The moods of the film vary as well. It starts out like a normal film then really tugs strongly on the heart strings when Bob loses his wife and slowly enters the genre of a light-hearted comedy.

Content varies. It tends to have a little too much stuff in it at times to be PG, but not enough 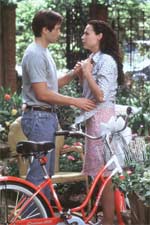 to be PG-13. The language is so-so. Could have been toned down. The worst is 4 "s" words and 3 "S.O.B.s" and a slew of different forms of blasphemy (not harshly meant as such like it seemed in Twister). Joe (James Belushi) cusses many times and one of his kids repeats what he says (done for comedic effect). Sexual content was pleasingly kept to a minimum. It was reduced to the occasional reference but nothing dwelled on. And the physicalness was limited to Bob kissing down Grace's neck, but they get interrupted before anything else happens.

One thing the film refreshingly included was something most movies neglect-- and that's the presence of God. Grace's grandfather is Catholic and they show him praying in a church in one scene, and he often mentions God positively throughout the course of the film (although occasionally uses the Lord's name as an exclamation at times).

In summary, the movie was very good. I really enjoyed it from beginning to end. It's not for everyone, however. The adult-related material may make you want to keep your child from seeing it, but as a whole, it's a positive film with some good values. If it was a little cleaner, I'd give it a higher rating, but I still have to give Return to Me a 4 and a half out of 5.

Sex/Nudity: There is some minor innuendo and references to sexual material, but nothing alarmingly bad. We see some of Grace's cleavage as she looks at the scar on her chest in front of the mirror

Alcohol/Drugs: Many characters have beer or wine at different parts of the film.

Blood/Gore: Following a severe car accident we never see, Bob has some blood on him as well as Elizabeth who is being transported on a gurney. Later we see him still in the blood-spotted shirt. The bag containing a heart for a transplant has some blood on it.

Violence: There is a car accident we don't see but hear about (and results in someone's death). Grace accidentally smacks Bob. Disclaimer: All reviews are based solely on the opinions of the reviewer. Most reviews are rated on how the reviewer enjoyed the film overall, not exclusively on content. However, if the content really affects the reviewer's opinion and experience of the film, it will definitely affect the reviewer's overall rating.