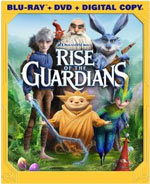 Rise of the Guardians

- for thematic elements and some mildly scary action. 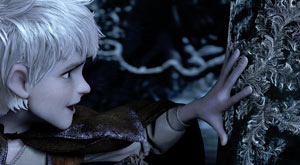 When an evil spirit called Pitch becomes bent upon taking over the world by inspiring fear in the hearts of kids everywhere, a group of our greatest heroes -- Santa, the Easter Bunny, the Tooth Fairy, the Sandman and Jack Frost -- band together for the first time, determined to stand in Pitch's way. More than a collection of storybook subjects, The Guardians are also a band of superheroes, who possess their own special powers. Now joined in opposition of a common foe, the Guardians heed the call and combine their powers to defeat Pitch and protect the world from his campaign of fear. (from MovieWeb.com)

Chances are, while growing up, you were introduced to the stories of the legendary mythical characters of Santa Claus, Easter Bunny, Tooth Fairy, Sandman and Jack Frost. Author William Joyce decided to invent new backstories for these iconic characters, reimagining them as protectors of children and bringers of hope to the world. And who better to have these heroes battle than none other than The Boogeyman? For Rise of the Guardians, we meet Jack Frost, a three-hundred-year-old boy frozen in his teenage years who is responsible for snow and cold weather, and is appointed by The Man in The Moon to join the other aforementioned Guardians as protectors when The Boogeyman strikes. It's almost Easter and The Boogeyman is bent on destroying the Guardians (who rely on the belief of children to exist) and spread fear across the world. So... can Jack and the Guardians stop him? 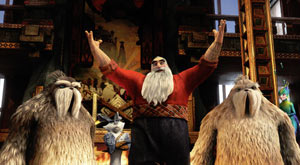 Rise of the Guardians is about as fantastical a story as they come, giving these iconic characters a real-life (yet cartoony) placement in our world. Jack has spent the past 300 years spreading fun and ice-covered mischief wherever he goes, but he doesn't truly know who he is or how he came to be "Jack Frost." Meanwhile, the Guardians have assembled to fight The Boogeyman and are surprised at The Man in the Moon's choosing of Jack to join them. From the start, the theme is heavily focused on believing in the unseen and something bigger than ourselves, while sacrificing to fight for others. DreamWorks and director Peter Ramsey have imagined these characters in ways we've never seen before -- from Santa Claus being a Russian warrior named North, to the Easter Bunny being an Australian-accented, boomerang-wielding fighter, and the Tooth Fairy being a spunky, hummingbird-like creature. Finally, the Sandman, who just goes by the name Sandy, is a fiesty little guy who doesn't speak, but uses symbols (made out of sand) and his expressions exclusively to communicate. Their nemesis, Pitch Black, is The Boogeyman--the complete opposite of our heroes, voiced elegantly by Jude Law to create a creepy force to be reckoned with. It's a truly unique way to imagine these iconic characters (two of which have the biggest American holidays centered around), and a fresh take on them. In fact, the general idea of turning these characters into warrior-like heroes is pretty ridiculous, but the execution is cleverly done.

One of the things that helps make it all work is the choice in voice casting. You'd never guess that the voice behind North is Alec Baldwin laying on a pretty thick Russian accent (actually, I kept picturing Rade Serbedzija providing the voice), while Hugh Jackman utilizes his authentic Australian accent for Bunny. Meanwhile, Isla Fisher is appropriately bouncy as Tooth and Chris Pine is well-suited for Jack (and sounds remarkably like John Cusack at times). Additionally, the visuals that the team creates are just stunning! Some of the human characters may seem a little iffy at times, but the detail in the backgrounds and sets are really exquisite. There's so much detail that you're likely to miss most of it on the first viewing, making it a movie that will have much to offer with repeat viewings.

Another standout aspect of Rise of the Guardians is the heart of the film. It's interesting to hear North corner Jack and grill him on who he really is inside--what his character is. And accordingly, it becomes part of the story as Jack tries to find out more about his past. He doesn't understand why he's been chosen by a higher power and this is something that only gets more intriguing to him when he learns that the teeth that Tooth and her fairies collect contain childhood memories and "wonder" in them. When Pitch steals Tooth's entire library of teeth, Jack becomes desperate to learn more about his origin. When he inevitably discovers more about that, it's pretty satisfying and brings necessary additional depth to Jack Frost. And while fantasy is heavily relied upon, there's an affirmation of faith that can be taken away from the story and its theme. By the film's end, a child asks one of the Guardians if they'll be around and he replies using the sun setting and rising as an example for knowing it's still there even when we don't see it. It's a neat way to make the concept of faith and believing more easily understandable for kids. Unfortunately, Christmas and Easter are completely secularized here and the closest thing to there being a god in the story is the mysterious "Man in the Moon." 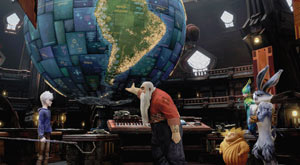 Content-wise, Rise of the Guardians earns its PG rating through the action and, especially, the intensity of Pitch and his nightmares. The storytellers used the imagery of mares--black, fearsome horses with glowing eyes--to be the carriers of Pitch's nightmares to the children of the world. In one instance, Pitch sees the sandy image of a pony dancing above a sleeping girl's head and he creeps into her room, touches it, and we see it turn black and scary with the little girl reacting to the new dream while sleeping. If you think your kids will be sensitive to the concept of The Boogeyman lurking while they're sleeping, they might not do too well with this story. There's no language, save for Bunny using "bloody" twice, and the only blood we see is briefly on a handful of teeth Tooth is holding. Otherwise, the only real content to be concerned about with Rise of the Guardians is action violence and Pitch's intensity. Finally, and this is kind of a spoiler, but death is implied in two different scenes; the first is when we believe a Guardian is killed (but later find out they're okay near the end of the movie) and through back story, we find out that a character had died years earlier by drowning to death. It's done very tastefully, but it still may be heavy subject matter for some.


Rise of the Guardians is available in a Blu-Ray/DVD/Digital Copy combo pack, a 3D Blu-Ray/2D Blu-Ray/DVD/Digital Copy combo pack, single-disc DVD and through all digital retailers. And just in time for Easter, you can pick up a special combo pack that includes 2 plastic hopping Easter egg toys for the kiddies (my 2 and a half year old loves them). They're not the highest quality toys, however, as they don't continuously or reliably hop when you wind them. But along with the feaure film in high definition on the Blu-Ray disc are the following extras...

Blu-Ray Exclusives - There are two Blu-Ray disc exclusives that are games you play with your remote control. The first one, "Jack Frost Snowball Showdown!" is just what it sounds like--you're Jack tossing snowballs in a snowball fight. It's a bit trickier than you think, though, and kind of clunky in its execution. "Rock, Paper, Scissors with Sandy" is literally you and Sandy playing the classic Rock, Paper, Scissors game. You pick one of the three and submit it and he randomly comes back with one of the three as well. You can do one round, three rounds or five rounds.

Legendary Features
Behind the Magic (27:43) - The rest of the extras are labeled "Legendary Features." The first is a behind-the-scenes, making-of featurette called "Behind The Magic." It's broken up into several subcategories that cover the look of the film, the character design, the special effects, and Alexandre Despat's musical score. It's one of the better featurettes for a new animated film in recent memory and seems to cover just about everything. The look of the film tackles each individual character's world they live in; character design talks about reimagining these iconic characters; special effects addresses stuff like Sandy's sandy look and trails of sand, as well as Pitch's mares; finally, the score talks about Alexandre Desplat's approach to the project and how each character was given their own theme.

The Man Behind The Guardians (6:25) is about William Joyce, the author of several books that were written in support of the film to provide some backstory before the events in the film take place.

Dreamers and Believers (10:47) - I was really surprised that there was no mention of the voice cast in "Behind The Magic," but that's because "Dreamers and Believers" is entirely dedicated to them. Here we hear from all of the central cast members and get to see them recording some in the studio. It's especially fun to hear Alec talk about his approach to North and then actually see and hear him do the Russian accent.

Sandy's Dream Guide is an interactive list of topics that are commonly dreamt about and what that "means." We also get a little piece of advice from Sandy. Topics to choose from include: Athlete, parents, bicycle, flying, ballerina, moon, animals, homework, fairy, skateboard, butterfly, running, castle, pirate ship, ocean, and allowance. All of the interpretations are positive and shouldn't worry anyone who reads them.

Vulgarity/Language: None. (Just 2 uses of "bloody" by Bunny)

Blood/Gore: Tooth holds out four teeth in her palm and we see some pink on the roots as she comments on there being bits of blood and gum on them.

Violence: When we first meet Jack, some people walk through him, meaning he's invisible, much to his surprise. He's really upset by this; Sandy shakes an elf with a bell on his hat to get the others' attention; A man slips on ice Jack makes; Jack throws a snowball at a kid and it starts a snowball fight; Jamie gets clocked by a couch; Pitch turns a girls innocent pony dream into a nightmare horse; Yeti snatch Jack and put him in a bag to take him to North; An elf throws down his trumpet, pushes another elf and walks away; Nightmares rush in to Tooth's place and steal the teeth; North wields two swords and swings them around; A dog chases Bunny around Jamie's room; Sandy and Pitch fight using their "magic;" Horses surround the Guardians and they all battle them; Pitch hits Sandy in the back with a "spike" of his magic and it consumes him; Jack freezes the nightmares with his staff; We see some teeth with blood on them in Tooth's palm; Pitch tosses Baby Tooth aside and breaks Jack's staff and then knocks him against a large rock; We see a young boy falls through the ice (and presumably die); North's sleigh crash lands; Jack and Pitch fight but Jack falls to the ground; A wave of fear/nightmares rushes in. The Guardians fight Pitch and his magic, with the town children joining in; A snowball fight breaks out; Tooth punches Pitch and we see one of his teeth pop out; Pitch is dragged down a hole in the ground as he's kicking and screaming; An elf kisses another elf in a joyful moment. The recipient punches him. Disclaimer: All reviews are based solely on the opinions of the reviewer. Most reviews are rated on how the reviewer enjoyed the film overall, not exclusively on content. However, if the content really affects the reviewer's opinion and experience of the film, it will definitely affect the reviewer's overall rating.