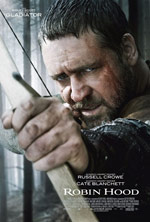 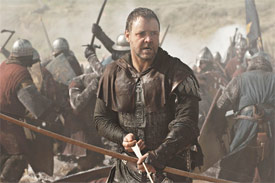 Oscar® winner Russell Crowe stars as the legendary figure known by generations as Robin Hood, whose exploits have endured in popular mythology and ignited the imagination of those who share his spirit of adventure and righteousness. In 13th century England, Robin and his band of marauders confront corruption in a local village and lead an uprising against the crown that will forever alter the balance of world power. And whether thief or hero, one man from humble beginnings will become an eternal symbol of freedom for his people. (from MovieWeb.com)

Robin Hood is a legendary tale that is given a fictional placement into realistic history via Ridley Scott's latest portrayal of the well-known story. With that, Scott & Co. have taken many liberties in adapting the story into an almost epic "biopic." It's the kind of treatment of the tale that gives the fabled character quite the makeover, so the end result is undoubtedly mixed. Forget what you've come to know and love about Robin Hood, as Ridley pretty much throws the book out to start from scratch. 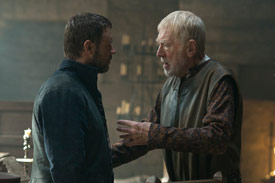 Last year, film goers were given a re-imagining of the beloved Sherlock Holmes character. Now, almost a half a year later, we're given a new Robin Hood in the form of Russell Crowe. Crowe has worked with Scott before in the epic Gladiator (and quite a few of Ridley's other films in recent years, actually), and the pair attempt to shape Robin up to a similar scale. The whimsical swashbuckling days of the 1938 Errol Flynn version are long gone, as are the fairytale aspects of the Disney animated telling. Instead, Scott tells Robin Hood about as serious and straight as an arrow... almost to a fault. Crowe does a solid job bringing a mysterious, noble leadership quality to Robin Hood, but it's played so serious and humorless that it almost entirely drains the fun from of it (he's more a quiet man than a voice for victims of injustice). Granted, there's no need for it to be goofy like Mel Brooks' Robin Hood: Men In Tights, but Crowe lacks charm, and in many cases, personality in scenes where the movie really could have benefited from it. Instead, Scott's Robin Hood feels about as dry as a pile of Autumn leaves.

This isn't to say the film isn't any good. That's actually hardly the case. As Guy Ritchie brought us a different dimension to Sherlock Holmes with Robert Downey Jr's portrayal, and J.J. Abrams rebooted Star Trek from scratch, Ridley Scott is giving us an alternate take on Robin Hood. Viewing it as such can give those watching a chance to enjoy what is nothing more than a possible origin story for the Robin Hood we know and love -- who robs from the rich and gives to the poor (This is more adaquately a Robin Hood Begins of sorts). Scott's Robin Hood in this film isn't quite the legendary Robin just yet. It's much more like 2006's Casino Royale which took the whole length of the film for James Bond to become "James Bond." So it is with the 2010 Robin Hood. However, Casino... was arguably more effective in this process, as Robin Hood gives us just a tease of the familiar Robin Hood persona just before the credits roll... to the point where it's almost unsatisfying.

Still, a strong script and even stronger cast propel the 2010 Robin Hood forward. Cate Blanchett plays quite the strong-willed Marian here - despite the fact that she doesn't seem to exude enough likability through her character to warrant any kind of attraction inevitable from Robin. She is, however, about as stiff as Crowe here, but still more fiery in the way she plays the part. Mark Strong (coincidentally, also in last year's Sherlock Holmes) steps into the shoes of the villain once again, and once again delivers a wonderful bad guy of whom you love to hate. Max von Sydow, who played a slimey character in Minority Report and even Rush Hour 3, is absolutely lovable here as Sir Walter Loxley. In fact, he seems to possess all of the warmth that Crowe lacks. And Mark Addy makes a great Friar Tuck, while Oscar Isaac succeeds in delivering a frustrating Prince John. 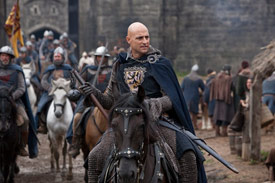 The violent war content of Robin Hood seems toned down to fit within the PG-13 rating. Ridley Scott hasn't offered anything under an R rating since 2003's Matchstick Men, including some epic war features. So it came as a surprise that this one wasn't rated R (which is always OK with me!). But upon watching the film, there's nothing in Robin Hood that would warrant an R-rating. The violence consists of a lot of glimpses of arrows piercing armor, knocking victims off their feet, and the common slashing of swords knocking people to the ground, but never showing blood or dismemberments. Everything happens extremely fast -- even to the point of being confusing at times. But bloody moments are rarely ever focused on. However, there is some blood shown. The first couple instances are rather minor: a tiny bit of blood in the palm of Robin's hand from a scratch, a small bloody cut on the palm of another man who is cutting open oysters, some blood on a dying man's teeth or scratches and scars on people's faces while in or after battle. Then we see a bloody cut on a man's face throughout the movie who had been grazed by an arrow, a little more blood on some people's faces during battle, an arrow sticking out of someone's neck (but the impact wound is hidden by the angle of the shot) as they're dying, and the most gruesome being the sight of an arrow shown sticking all the way through a man's throat, with his face and teeth being bloody (shown briefly). Sexual content consists of one significant scene where Prince John's mom confronts him cheating on his wife while he's in the act. We see him fooling around with a girl in bed and then her with just a sheet wrapped around her and a very brief out of focus partial glimpse at his bare butt as he stands up. Language consists of about three uses of "Chr-st" and two or so uses of "G-d" in vain, while nothing else but the use of "b*stard" a few times seemed to be used. It would have been great for some of that to have been toned down further, but I suppose, these days, it could have been much worse as well.

The end result of Robin Hood is a serious telling of the legendary tale in an attempt to have the character fit within an historic setting, all the while aiming to please an adult audience. The film's not only a bit overlong, just two minutes shy of two and a half hours, but it moves rather slow and lacks the fun that you would expect from such a story. Still, Scott's direction, solid acting, and a good script make Robin Hood a strong movie, just maybe not the best version of Robin Hood. Since the film seems to set things up for a sequel, it'd be interesting to see if a second outing would take things more down the road of what we've come to expect from a Robin Hood story. But until then, this 2010 entry will just have to do.

Sex/Nudity: We see a woman outside of a room where we hear some playful sounds coming from behind the door. Eleanor asks the woman what's going on and the woman complains that her husband is fooling around with another woman inside. Eleanor busts in the room to find Prince John in bed with Isabella who are fooling around naked under bed sheets (we just see their head and shoulders). Eleanor scolds John, who stands up naked in front of the camera. It's very close and out of focus, but we see a flash of his bare butt. Isabella sits up, with a sheet wrapped around her. John stands nude before his mother Eleanor and then gets dressed (we only see him from the torso up). He defends his extramarital affair by complaining that his wife is "as barren as a brick" when it comes to child bearing; We see Robin's men flirting with women in a bar. The next day they're seen shirtless washing up in a trough and the women emerge from the house behind them, implying that the guys slept with them; Marian threatens Robin that if he touches her in the night, she'll cut off his manhood; A man traps Marian in a barn and intends to rape her. She then entices him by showing him part of her leg, and then stabs him in the back of the neck when he kneels in front of her

Alcohol/Drugs: Friar Tuck comments that if he weren't the town friar, he'd be the town drunk. We see a bar full of drunk and drinking patrons; We see people drinking wine and other random drinks at different points in the film

Blood/Gore: We see a drop of blood on Robin's palm after he scratches himself; A dying man has some blood on his face and teeth; We see a dying man with a piece of an arrow in neck (but we don't see the actual wound as its hidden by his armor); A man who's face is grazed by an arrow has a scar on his mouth for the remainder of the movie; A man accidentally stabs his hand while cutting open an oyster. We then see some blood on the oyster and on the man's hand as he hands the oyster to another man who then eats it; We see Robin with blood on his face and it drips down onto another person's face; Godfrey has a little bit of blood on his forehead; We see an arrow sticking through a man's throat and there's blood around the wound as well as on the victim's teeth; We see some war victims with a little bit of blood on their faces, but not a lot; We see some scars on Robin's body when he undresses for a bath; We see that the water during a battle on the beach is somewhat red from blood

Violence: Lots of war violence. Many, many shots of arrows hitting people and armor and swords slicing at people, knocking them down, etc. Prince John clears a table in anger and accuses a woman of lying. To prove she's telling the truth, she puts a knife blade to her chest, but we see it fall to the ground as John realizes she's telling the truth; (Spoiler) An able, younger man fights an old blind man and slices him, then impales him with his sword (we don't see the blade go through him, but know that it did); Armies torch and burn several towns or houses in order to spread fear; A man locks himself and a woman in a barn with intentions of raping her, but she stabs him before anything can happen; and more war-related violence Disclaimer: All reviews are based solely on the opinions of the reviewer. Most reviews are rated on how the reviewer enjoyed the film overall, not exclusively on content. However, if the content really affects the reviewer's opinion and experience of the film, it will definitely affect the reviewer's overall rating.