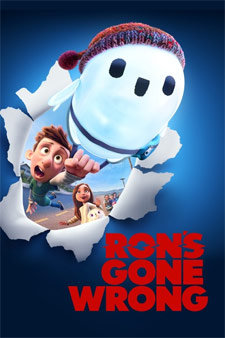 The story of Barney, an awkward middle-schooler and Ron, his new walking, talking, digitally-connected device. Ron's malfunctions set against the backdrop of the social media age launch them on a journey to learn about true friendship. (from IMDB)

The latest animated film from "20th Century Studios," since Disney purchased FOX, is a social media-driven story that takes aim at the modern tech companies and makes a statement about friendship in the modern age. The movie is hardly subtle in its attack on the social media lifestyle and tech-saturated world we currently live in, but it's an attack that is more than warranted in today's age. While it's hard for adults to disconnect from their smartphones, watches, and tablets, it's sad to see what it's doing to young people who are more concerned about "likes" and "follower" counts than their connection to the immediate world around them. So what does Ron's Gone Wrong have to say about all this?

From the start, Ron's Gone Wrong gets off to a bumpy start, as its dull first 15-minutes don't do much to hook the viewer. It's established that an Apple-like company called Bubble has debuted a new product that acts as a portable social media accessory that is purposed to learn what people like so it can help connect them, digitally mind you, with those who have interests in common with them around the world. It's as if Instagram and Facebook were downloaded into a portable robot that never leaves your side. In all of this, middle schooler Barney Pudowski doesn't really have any real friends and has always struggled to fit in, which isn't helped at all when all of his classmates get their own "B*Bots" and he's literally the only one without one. When he does finally get one for his birthday, it's a glitchy one that can't connect to Bubble's network and ends up having very limited functionality. However, Barney and his bot, who he names Ron, become fast friends, and when others learn that Ron can do things that B*Bots aren't supposed to do - like hit kid bullies back and express its OWN interests - Bubble tries to apprehend the robot to terminate it.

While Ron's Gone Wrong got off to an underwhelming start, it really finds its life, ironically, when Ron comes into the picture. His quirkiness, fueled by Zach Galifianakis's perfect voice casting, creates most of the film's humor, and as his presence upends the world around him, the movie becomes a lot more fun (and my 11-year-old son ended up loving it). The movie illustrates how self-absorbed the social media fame craze is, and how easy it is to be hurt by the insensitivity of it as well. Because Ron isn't connected to the Bubble network, he's able to adapt naturally as Barney's friend, and that flexible structure is what helps their friendship really blossom. In the end, the message is clear that, while digital connections can still be okay in our lives, we musn't lose the personal human connections in the process.

Topics like big tech companies not caring about privacy and the sharing of personal information are also covered, and it's interesting to see the studio clearly going after companies like Apple. The villain in the movie even kind of looks like Steve Jobs... Again, it isn't exactly subtle, but the attack isn't unfair either. We live in an age where we're being manipulated by technology and social media everyday, all so some tech giants can line their pockets. The message of warning children about this kind of intrusiveness isn't a bad thing.

Ron's Gone Wrong's content isn't too bad. There are two iffy uses of "h*ll" in the context of phrases like "all h*ll breaks loose" and Barney's inner monologue referring to recess as "recess h*ll." There are also three uses of "sucks," but no other language or blasphemy. There's violence, but mostly comedic, especially when Ron attacks a bully on the playground. Barney even makes it a point to inform Ron that it's awesome but horrible (because, really, who likes a bully?). There's a fleeting reference to Barney's Grandmother having "mended" something years ago with the use of vodka, and a random guy having an interest in cheap beer. Overall, though, Ron's Gone Wrong is a pretty silly and lighthearted movie with some real things to say about technology in our culture.

While not one of the year's top movies, Ron's Gone Wrong is still decent family entertainment that may even help spark a conversation about how technology is being used in our family's lives.


Ron's Gone Wrong has been out for over a week digitally, and will debut on disc in February, 2022. Along with the feature film, the iTunes digital copy of Ron's Gone Wrong includes the following extras:

Ron's Gone Wrong in Digital 4K - I'm a firm believer in modern animated movies being best experienced in a 4K transfer. Ron's Gone Wrong looks great streaming in 4K, with its vibrant colors and crisp visuals. I definitely recommend it in 4K.

A Boy and His B*Bot: When Jack Met Zach (3:51) - Here, Ron's Gone Wrong voice talents Jack Dylan Grazer and Zach Galifianakis talk about the story and their own personal interests in relation to the characters they play in the story. It's interesting to learn how much Zach is anti-technology, with Jack being from such a younger generation that has been born into it and more directly representing the youth in this movie. (1 "Oh my G-d")

Making Ron Right (16:23) is the more in-depth making-of featurette here, featuring cast and crew talking about the movie and its story and the meaning behind it. The director talks about how the idea about wondering how you can personify an iPad inspired the B*Bots. We see some fun in-studio footage of the actors recording, and they talk about how Zach and Jack recorded some of their dialog while in the same room so they could play off of each other. They also cover how some of the animators acted out the film with home video recordings to use as reference for the animation. Overall, it's a solid, albeit short, behind-the-scenes featurette.

Finally, the "Sunshine" Music Video (2:57), featuring the song by pop artist Liam Payne set to a mix of concept video footage and clips from the movie, and a Theatrical Trailer (2:04) round out the special features here.

Alcohol/Drugs: Gran talks about fixing something in the past with vodka; Ron brings a guy six packs of beer and says the man likes discount beer.

Blood/Gore: We see a dismembered chicken foot in Barney's lunchbox (as a snack); We briefly see a cartoony zombie image with half a brain and dangling eye; We see an abrasion on Barney's cheek; We see several kids bite into the chicken feet at the end of the movie.

Violence: A car stops short of nearly hitting a kid on a bike; A kid falls off a sign hanging on the wall in the school hallway while trying to scare other kids; We see a flashback of a birthday party gone wrong with kids throwing knives at a poster, a pin going into a goat's butt (and then it kicks a kid), a man cuts a cake with a cleaver, with other images of fire and chaos; We see a car narrowly miss hitting people in the street; Ron grabs a cleaver from the kitchen counter, spins and throws the cleaver which sticks in the wall; Ron grabs a chicken and stretches its neck to measure how much pressure must be applied for its head to come off. We then see it pop an egg out in response (he doesn't pull its head off); Rich slaps Ron. Ron slaps him back. They hit each other and Rich throws Ron across the playground, causing some of his limbs to fly off. Ron chases him around saying he's going to destroy him; Ron throws his arms at a cop's face; Ron hits a cop again; A bot get destroyed in a crusher; We see a replay of Ron hitting a cop; Ron gets shocked by wires and falls into a creek; Ron rolls down a hill and crashes thru a fence into a pool; Bots unlock their safety feature and start hitting their kid owners. We then see lots of bots fighting and chaotically interacting with each other. We briefly see a cartoony zombie image with half a brain and dangling eye; We see a movie projected onto a wall that shows a clown with a power drill (hinting that the kids were able to unlock R-rated movies); A bunch of bots unite as a large mech and grab a girl and swallow her. She then falls out the bottom of the large mass of bots and exclaims "It pooped me!," which becomes a running gag for kids to make fun of her; Ron and Barney jump into a river; Bots chase Ron and Barney; Barney struggles to breathe at one point because he has asthma; We see Barney in a hospital bed after getting help for his asthma; Barney throws a hat at his dad; A goat bites wires to fry an electrical system; Barney and Ron fall down the server shaft and almost falls into a large spinning fan; Andrew kicks a bot. Disclaimer: All reviews are based solely on the opinions of the reviewer. Most reviews are rated on how the reviewer enjoyed the film overall, not exclusively on content. However, if the content really affects the reviewer's opinion and experience of the film, it will definitely affect the reviewer's overall rating.