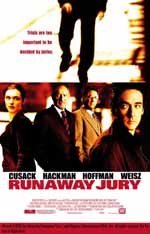 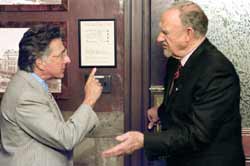 From master storyteller John Grisham (The Firm, The Pelican Brief) comes Runaway Jury, a suspense-thriller about a high-priced and ruthless jury "consultant" (Gene Hackman) who will stop at nothing to secure a verdict on an explosive trial. With lives and millions of dollars at stake, the fixer wages a deadly battle with a jury member (John Cusack), a mysterious woman (Rachel Weisz) and an honest lawyer (Dustin Hoffman). The film marks the first pairing of screen legends Gene Hackman and Dustin Hoffman.

Runaway Jury is a court-room thriller with a strong political plot. While I'm hardly a fan of political affairs, Runaway Jury offers a solid cast, entertaining premise, and enough twists and turns to hold the audience's attention. The plot isn't the most plausible, but if you're willing to excuse that - and its preachy political agenda - you'll probably enjoy this film.

**Some Minor Spoilers Ahead** See, Runaway Jury revolves around a court case where a woman whose husband died in an office-rampage assault is suing the gun company that manufactured the semi-automatic weapon the killer used. Since the killer had reportedly killed himself, there isn't really anyone else to go after except for the gun company. Now, a lot of factors play into this plot. A more liberal take on the situation will jump to blame the weapon itself almost more - if not more - than the killer holding the weapon. Blame always needs to be placed on someone other than ourselves, so if it's not the person who pulled the trigger's fault, it's certainly the weapon of choice's fault. Now, the plot takes this idea but gives it just enough factors to make you have to agree that the fault might lie partly with the gun company. I mean, what in the world does a civilian need with a semi-automatic weapon anyway?! And, not only that, but the film makes the jury consultant that is Hackman's character and all those involved with the gun company so evil, you just can't possibly take their side. The rest of the complicated plot surrounding this setup is orchestrated well enough to make this one fun film to watch. However, if you're familiar with law, you're liable to get hung up on the unrealistic portrayal if it here, so just keep reminding yourself this is Hollywood. 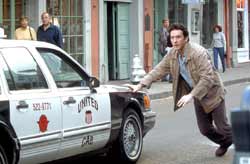 The performances were all-around excellent. I've enjoyed watching John Cusack in anything I've seen him in and this movie is no exception. Rachel Weisz is excellent as the mysterious and slick Marlee. Dustin Hoffman is equally good as the sympathetic lawyer representing the plaintiff while Hackman does a good - if not over the top - job of playing the film's slimy villain. A lot of the supporting cast is great and you're liable to recognize the majority of their faces, too.

Content is moderate with language being surprisingly toned-down overall. Violence is intense in the opening scene that sets up the film, but nothing graphic is seen. A few other scenes of moderate violence is included with one briefly involving a character being stabbed in the leg with a piece of wood (which we see sticking out of the wound with some blood). Sexual content is kept minimally to just an implication when Marlee and Nick kiss heavily while lying clothed on a bed before the scene cuts away. That scene was rather pointless and wasn't needed at all while the language could have stood to be milder yet.

So what does this jury say? The younger ones should runaway, but adults may want to see this film and talk about the political issues mentioned. However, we personally suggest renting it on DVD and using such editing programs as ClearPlay on your computer to block the junk out and leave you with a much more guilt-free overall experience. It isn't the most edifying film to choose from so just look over the content below before deciding to see it or not.

Sex/Nudity: Nick and Marlee passionately kiss and we see them fall onto her bed clothed. She removes her shirt and we see her shoulders and part of her bra as they kiss and the scene ends there, implying they have sex.

Alcohol/Drugs: Some people drink and smoke; Stella sneaks alcohol into the juror room for herself; A woman is found in the bathroom of a bar lying on the floor in a puddle of vomit (we see some of it), we then learn it was from overdosing on pills

Blood/Gore: After a man is let go while jurors are being picked, he makes a scene by exposing a "Guns Kill" t-shirt and spreading fake blood all over himself; A woman is found in the bathroom of a bar lying on the floor in a puddle of vomit (we see some of it), we then learn it was from overdosing on pills; A man is stabbed with a shard of wood and we briefly see it protruding from the wound in his leg with blood around it; We see Marlee has some bruises / cuts on her cheek after an attack.

Violence: A outraged former employee of a company goes on a rampage through an office building and guns down eleven people dead and injuring five. We just see people running and a gun firing but see nothing graphic. We later learn of those casualty details; A man throws some desk items at another man who later attacks that man's car with a pipe as he drives away; Two people rummage through an apartment before setting it on fire; A man attacks a woman and they struggle; etc... Disclaimer: All reviews are based solely on the opinions of the reviewer. Most reviews are rated on how the reviewer enjoyed the film overall, not exclusively on content. However, if the content really affects the reviewer's opinion and experience of the film, it will definitely affect the reviewer's overall rating.