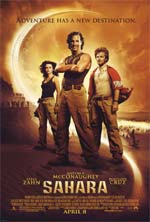 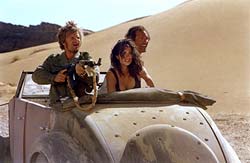 Master explorer Dirk Pitt (Matthew McConaughey) takes on the adventure of his life when he embarks on a treasure hunt through some of the most dangerous regions of West Africa. Searching for what the locals call "The Ship Of Death," a long lost Civil War battleship which protects a secret cargo, Pitt and his wisecracking sidekick Al Giordino (Steve Zahn) use their wits and clever heroics to help Doctor Eva Rojas (Penelope Cruz) when they realize the ship may be linked to mysterious deaths in the same area. (from SaharaMovie.com)

I admit, I've never read a Clive Cussler novel, so the only knowledge I have of the Dirk Pitt stories is from what I've heard from family members who have read them. I found it rather exciting when I'd learned they'd decided to make a film out of the Pitt adventure novel "Sahara," but even moreso surprised when I'd heard the Cussler was unhappy with script changes and had filed a suit to make sure no more Pitt movies were made. So naturally, the new action/adventure film Sahara has had a lot of hating against it before its early April 2005 release. 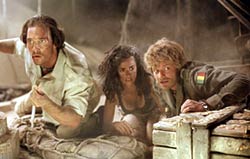 Theatrically, Sahara plays out a lot like if you would combine Indiana Jones with James Bond and toss him into the heart of the Sahara desert. Now, one must keep in mind that Pitt has been around in novel form for decades, so he was actually around before Indiana Jones was even imagined. But nonetheless, it's easy to draw the comparison from this film. And the buddy camaraderie alone between Pitt and his sidekick Al Giordino alone helps this heroic team stand apart on its own.

Sahara falls neatly into the action/adventure genre, which often calls for the suspension of reality from the audience. Plenty of things that occur in the film can make the average person scratch their heads in disbelief, but the audience needs to realize it's all in good fun. We all know, in reality, the film contains many examples of where a main character probably should have died a good dozen different times. But, really, where's the fun in it if they did? There's that aspect of the fantasy genre where a viewer can step out of reality and into a world where the impossible can happen, and it's just darn good fun. There's nothing wrong with finding a wrecked plane in the desert and turning it into a sail glider, is there?

The acting was pretty solid throughout the film, a step above the campiness one might expect from the genre. Steve Zahn is wonderful as Sahara's comic relief, and McConaughey plays off strongly with his costar. While there is endless dispute over whether the actors were properly chosen for their famous roles, they seemed to work great on screen.

The biggest caution flag for Sahara, however, is its violent content. The younger ones definitely shouldn't see this movie, due to its frequent, albeit often bloodless, action violence. There are, however, a few pretty intense sequences that involve a potential plague that causes lesions on people's bodies and faces, as well as a scene where a few characters are gunned down and executed. Language is especially mild, while sexual content is limited to seeing Eva in a bikini and the top of Al's butt as he's bending over.

Overall, I found myself thoroughly entertained by Sahara. While it may not be the best in its genre or one of the best films you'll see all year, it was a fun action flick. I will warn you that the violence is pretty intense at times, so please use caution before seeing it or taking any kids to see it.

Sex/Nudity: When we first meet Al, Eva walks up behind him as he's bending over and the top of his butt crack can be seen above his pants. We briefly see Eva in a bikini and passionately kissing Dirk.

Alcohol/Drugs: Some people have drinks during the film. Al and Dirk talk about betting a case of liquor.

Blood/Gore: We see some lesions on a person's face and body and their eyes look diseased and gross; We see another person with similar symptoms who appears to be dead; We see a very quick shot of harpoon impaling a man's hand (with blood all around the wound); We see some more views of people with lesions; We see a few bodies that have been shot lined up with a little bit of blood on their shirts; We see a man who's been shot has a little bit of blood on his shirt and we see a tiny bit on his chest from an angle when we see his shirt opened; We see a few little cuts on Dirk and Eva's faces; We see some skeletons in a room when Eva falls into it.

Violence: Lots of action violence with people being shot at, shot to death, explosions, falling to their death, etc. Most is non-graphic Disclaimer: All reviews are based solely on the opinions of the reviewer. Most reviews are rated on how the reviewer enjoyed the film overall, not exclusively on content. However, if the content really affects the reviewer's opinion and experience of the film, it will definitely affect the reviewer's overall rating.