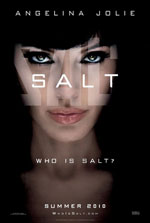 In Columbia Pictures' Salt, Angelina Jolie stars as Evelyn Salt, a CIA officer who swore an oath to duty, honor, and country. When she is accused by a defector of being a Russian sleeper spy, Salt goes on the run to clear her name and ultimately prove she is a patriot. Using all her skills and years of experience as a covert operative, she must elude capture and protect her husband or the world's most powerful forces will erase any trace of her existence. Liev Schreiber stars as Winter, Salt's boss and friend on the Russian desk at the CIA, and Chiwetel Ejiofor plays Peabody, a CIA counter-intelligence officer. (from Movieweb.com) 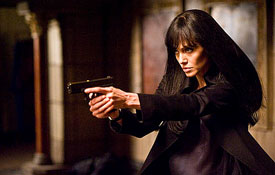 In 2002, Hollywood brought the unassuming Matt Damon to the big screen as a trained assassin with amnesia. The success of the action-packed film spawned two sequels, with each film being more successful than the next. In 2010, Columbia Pictures brings a new mysterious character to the forefront, Evelyn Salt. While the film was originally intended to feature a male lead for Tom Cruise to play, it was adapted to suit Angelina Jolie as the title character once Cruise had passed on it. In the end, Salt isn't really a whole lot more than a female version of Jason Bourne.

Angelina Jolie is no stranger to action roles. She can play the sexy tough gal role very well, and has many times before -- from the Tomb Raider franchise to Mr. & Mrs. Smith, and even 2008's Wanted. So for her to play Evelyn Salt, this certainly is no stretch for her. Director Phillip Noyce returns from a four year hiatus (his last film was the Tim Robbins feature Catch A Fire in 2006) to direct Salt, doing a fair enough job with what he had to work with. But for the most part, Salt has a been-there, done-that feel to it and Jolie's star power isn't enough to really carry the film. Part of the movie's biggest problem is the ambiguity of her character. Even when we saw Harrison Ford running from Tommy Lee Jones throughout The Fugitive, we knew he was innocent, so we could easily get behind him and support him. With Evelyn Salt, she's kept a mystery for nearly the entire film, so at times it's shocking to see her do the things she does. It begins to feel like there isn't anyone worth rooting for in the movie. 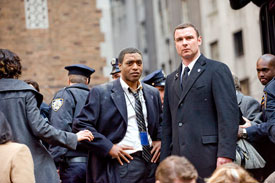 It's difficult to talk about the plot of Salt without giving things away, so if you'd like the plot to remain a total mystery, you'll want to skip this paragraph (consider yourself warned). The story revolves around terrorism that isn't rooted in the Middle East, but instead Russia. And a group of Russian activists devoted their lives to training children to take down the United States. When the beginning of the movie (and the trailer, for that matter) reveals that "Evelyn Salt" is the assassin, she makes a break for it and becomes a fugitive. The mystery as to whether she is bad remains fuzzy for most of the film, so some of the things she does make it tough to root for her. And the violent action sequences are pretty brutal. It's like the Liam Neeson film Taken, without knowing that he's brutally beating the pants off of some really bad people because they've kidnapped his daughter for the purpose of human trafficking -- basically, you're watching your "hero" (or, in this case, heroine) beat up and kill American security officers and batter police officers without knowing why. And while we feel bad for Jason Bourne who is a victim of his circumstances, Salt is doing this with a stonecold look on her face, as if we're to know that she knows what she's doing... and some of them are pretty ugly things.

The violence in Salt is its biggest issue when it comes to content. Language consists of a possible "F" word (possibly grunted by Liev Schreiber during a chase sequence... wouldn't be the first PG-13 movie he's done that in either), a handful of "s" words and a surprisingly abundant amount of "g*dd*mn" (and several "J-sus Chr-st"). It's one thing to have a lot of swearing in a movie, but it's another when it consists of quite a bit of blasphemy. When it comes to the violence, several scenes are substantially edgy. One scene features Salt breaking a bottle and grinding it into a man's throat to kill him. While we (thankfully) don't see the actual contact or stabbing, we hear the man's gurgling-noises-of-death and hear the squishing sound. When it's all over, we see the bloody piece of glass hit the ground. Another sequence has a suicide bomber blowing himself up. We actually see the explosion originate from the man's body, but it's very sudden and not graphic. Still, it's an intense moment - especially when you can "feel" the explosion due to the bass in the theater. At the beginning of the movie there's a brief torture scene where we see Salt strapped down in her underwear and covered in blood, pleading her innocence, but has a hose forced into her mouth and gasoline poured down into it. Finally, later, a person strangles another person to death with a handcuff chain as they lean their body over a railing to put their weight into the strangulation. Yeah, it's not a pleasant execution. Regarding sexual content, if anyone has seen the trailer for the film, they've seen two sequences where it appears that Salt is making out with a guy while in her underwear and then another where she is in black underwear while straddling a guy. Neither of these scenes are actually IN Salt. We only see Salt in her bra and panties during the torture scene and that is the extent of that kind of content. 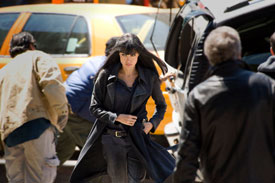 Now, a bizarre subplot for the film is that Evelyn's husband has devoted his life to the study of arachnids. So when we first see them at home together, he has a tarantula in a clear box on their kitchen table and other spider containers nearby. Later, back in their apartment, there are more close-up views of spiders, pictures of them on the wall, and a view of a book on them. Later, we see the close-up of another one in a tube. If anyone hates spiders (like this reviewer), you'll want to be cautious about this film for sure.

Salt is an entertaining action film, but it doesn't feel original, and a lot of the violence continues to push the boundaries of what is acceptable within the PG-13 rating. This one's about as violent and intense as films like Taken, Push, and the Bourne series. Jolie does a good job as Salt, but some weird costumes and make-up choices along with only a decent supporting cast and a surprising but moderately nonsensical "twist" finale (it raises some good questions) hinder the film (not including the language, which did put a damper on it for me). Lastly, the theme of terrorism may be disturbing to some, especially in this global climate, so you may want to consider that some intense themes do come into play here as well. If a Salt 2 ever actually makes it into production, I might be tempted to check it out, but this problematic first installment isn't likely to catch on enough to warrant Salt becoming a franchise for Columbia.

Sex/Nudity: We see Evelyn in a bra and panties strapped down being interrogated in a prison when the film opens; When being chased in a later scene, Evelyn removes her panties and uses them to cover a security camera (but we don't see any nudity)

Blood/Gore: The movie opens with Evelyn bound and being interrogated in just a bra and panties. She has blood all over her head and body; We see Evelyn with abrasions on her face and one of her eyes swollen shut. We see this several times; A man is shot and we see the bullet hole as it happens and afterwards, but it's not very bloody; Salt uses a broken bottle to stab and kill someone. We see the person's reaction and hear a gross squishing sound, then the broken glass on the ground covered in blood; We see a bloody cut on Evelyn's side after a bullet had grazed her (and she bandages it); We see a room full of dead men after an explosion; We see a flashback of a little girl whose face is bandaged up and bruised after a car accident; A person has a really bloody face after sustaining a broken nose (we see their face is bloody for awhile). They have some blood on their clothes too; A man has a little bit of blood on him after a fight

Violence: Evelyn is being tortured in North Korea in a flashback. We see her in her bra and panties, tied down and covered in blood. She's struck repeatedly and then they put a hose in her mouth and pour gasoline through it. They then hit her and the scene ends there; We see Evelyn with abrasions on her face and one of her eyes swollen shut; A man uses a boot knife to kill two men in an elevator and beats them up, then shoots them dead; Evelyn gets cornered on a bridge and is shot at as she jumps off; We see Evelyn beating up and shooting various security guys and using a bomb to collapse a floor, then shoots someone; A man punches a woman in the face; Evelyn beats up several police officers in the back of a cop car, causing one to fall out of the car while it's moving. She tazes the driver and continues to do so to get him to cause several car accidents and eventually drive the car off a bridge into a taxi cab below; A tied up man is shot in cold blood; Salt uses a broken bottle to kill a man and then shoots up a room full of people and drops grenades to a lower level, killing everyone there; Salt fights, beats up, and shoots some security people; A kamikaze bomber opens fire on a room full of people, killing some, then blows himself up, causing a big explosion; Salt takes down more guys, shooting some, fighting others; In one scene, it looks like she takes down a guy, then takes his gun and shoots through his body (to muffle the gunshot?) to shoot another guy coming at her; A man shoots up an entire room of people and punches another guy. A woman pops her head up from behind a see-through chair and he shoots her in the head (we don't see the impact as the chair obstructs it); A man and woman fight a brutal hand-to-hand fight and one of them receives a bloody, broken nose; We see a man grab a pair of scissors but a handcuffed person jumps on them and uses their entire body weight to hang over a railing with the handcuff chain around the person's neck to strangle him to death; A man punches a handcuffed person in the face a couple of times; And probably some other action violence Disclaimer: All reviews are based solely on the opinions of the reviewer. Most reviews are rated on how the reviewer enjoyed the film overall, not exclusively on content. However, if the content really affects the reviewer's opinion and experience of the film, it will definitely affect the reviewer's overall rating.