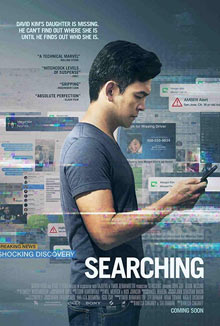 After his 16-year-old daughter goes missing, a desperate father breaks into her laptop to look for clues to find her. (from IMDB) 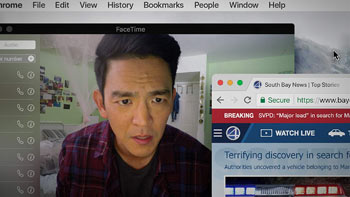 Movies that make use of a different, unique--yet somewhat gimmicky, style of filmmaking and/or storytelling have always been an acquired taste. Horror movie The Blair Witch Project introduced the "found footage" approach that was later replicated for the more mainstream, J.J. Abrams-produced monster movie, Cloverfield. If viewers couldn't get past the nausea-inducing shaky camera, they wouldn't be able to sit through the film, which gave viewers the first person perspective of the cameraman for the entire film. For 2018's Searching, director Aneesh Chaganty stages the entire film exclusively on computer screens and mobile devices, taking the fresh idea that 2014's supernatural teen horror film Unfriended had used, giving it a different spin to tell the story of a father trying to find his missing teenage daughter. The end result is indeed a unique experience, but no less a powerful one.

Hearing very little about the details of what Searching would actually be like, I decided to check it out based on the buzz it was getting. I actually had no idea the entire film would be shown from a computer screen, and--at first--I found myself fighting a mild sense of claustrophobia by being confined, as a viewer, to a screen. I kept anticipating the film to break open and let us be the usual moviegoing spectator of a theatrical story. This never happened. But as the film progressed, I found myself adjusting to this viewing format and getting the chance to see what new and unique ways the director and filmmakers might utilize to tell this story. But by telling it through chats, text messages, Face Time videos, YouTube videos, news feeds and other online streaming videos, there was a great sense of realism brought to the story.

If the concept sounds too gimmicky to even want to attempt to watch the film, you may actually be missing out. The film brilliantly opens with father David Kim setting up a Windows PC profile for his family, and the trio -- including his wife, Pam, and daughter, Margot -- posing for a family photo. We're then treated to a montage (think the movie Up, but with dialog mixed in) that shows Margot growing--from the first day of Kindergarten on--as well as Pam developing and fighting cancer. The way it's handled is emotional and heartbreaking, especially when lots of day-to-day methods of storytelling--very relatable ways--are used to convey this. With the loss of Pam in the opening flashbacks, we're brought to two years later as David is raising his now-teenage daughter alone as she is in high school. Searching takes place in the spring of 2017 and makes good use of every popular means of modern Internet technology that we commonly use today. It also serves as an eye-opening look into how today's social media and technology play a role in the lives of today's youth. In a lot of ways, Searching is a bit of a PSA and learning tool for parents of teenagers. As David digs into his daughter's social life, he's introduced to the world of webcasting, video blogs, Tumblr, and more -- the things many busy parents don't even think (or know to think) about that so many people are regularly involved in these days. And as we live out the horrific experience of trying to find a missing child through David's anguished eyes, it's easy to feel the desperation and panic that he is feeling. And the storytelling devices through video chats, surveillance videos, news reports, etc, just make the film experience feel all the more real to the viewer.

Star Trek's John Cho (also known from the Harold and Kumar films from 2004 and 2008) plays David Kim with perfect relatability and realism. He's an inspired choice for the central role. Margot, his daughter, is played by newcomer Michelle La with just as much realism. Rounding out the core cast is Joseph Lee as David's brother, Peter, and Will & Grace's Debra Messing as the lead investigator into Margot's disappearance, Detective Vick. The cast is so good and convincing that it's easy to be drawn into the drama and tension and forget these are just actors playing out a scenario. The music in the film is decent, as it helps strengthen some scenes or ratchet up the tension, but it sometimes sounds a little dated at times (i.e. It's nowhere near the quality of a Zimmer or Williams or Powell). Ultimately, though, it gets the job done to add to the film more than take away from it.

The content for Searching is more the nature of the story than anything else. Heaven knows a trip around the web yields all kinds of usually borderline R-rated content (particularly comment sections of pages), but Searching is careful to give viewers a more reserved glimpse at the online world. There is some language, mostly written, including the "F" word censored twice as "f***ing" and twice as just the letters "f" and "k" together. The word is shouted in anger verbally in one scene (not by David), while the "S" word is only heard a couple times from a bystander filming an altercation between a couple people in a YouTube video. Other language includes 1 "h*ll," 1 "d*mn," and a couple uses of "Oh my G-d." As David is browsing live streaming videos, we very briefly see someone writing "J-sus" as a response to what they're seeing. There isn't much sexual content, although when we see what looks like a comment from Margot saying she learned where babies come from (during the opening montage), we then see the words "what is entercourse" typed into a search field (misspelled just like that), but the scene ends there and is meant to be funny. Later in the film, we see someone's comment on Margot's Instagram being an eggplant emoji and three drops of water to serve as innuendo, and the same guy later comments that Margot is with her and he's her pimp (neither were true). This is a little spoiler-ish, but a character is accused of sleeping with a teenage girl, but we find out that's not true. Lastly, a secondary character is shown having a jar of marijuana in his possession and it's mentioned a couple times that he smokes weed regularly (and probably too much). There is some violence, but nothing particularly graphic. We hear that a character had committed suicide, but we don't see the act, and we hear some other violent act descriptions but also don't see it on screen. The only violence on screen is a third-person view of two people getting into a scuffle in public (seen through a shaky handheld cellphone camera) and another person shoving and grabbing the face of another person during a sort-of interrogation. 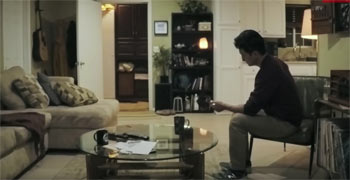 A film like Searching is anything but light when it comes to the content or nature of it, but as a father myself, the theme of the film definitely struck a chord with me. Also, Cho does an exceptional job throughout the film, and the mysterious nature of the plot keeps the viewer guessing, and on the edge of their seat, until the final moments. Entertaining, intriguing, and even disturbing due to its realistic high stakes and execution, Searching is an unexpected highlight to the end of the summer movie season that may be just the "something different" you're looking for.

Sex/Nudity: We see what is apparently Margot typing "what is entercourse" (spelled like that) into a google search field on the screen; David watches some of Margot's live video casts. In the first one, a guy comments "boobies plz" to which Margot gets disgusted and blocks the guy; We see a teen boy's comment on Margot's Instagram that is an eggplant and three water droplets; A boy says he's a girl's pimp; A man accuses another man of sleeping with a teenager (SPOILER: he didn't)

Alcohol/Drugs: We see a jar of weed at Peter's house and David sees it too, asking him if he's smoking a lot. Peter asks him to not talk about it; SPOILERS: We find out a character drugged another character to get them to commit suicide (not seen); We find out an adult was helping a teen get high on marijuana.

Blood/Gore: We see a red, bloody abrasion on David's chin after an altercation. It's only visible closely while he's on streaming cameras, so it's not very detailed; In the opening montage, David (and the viewer) sees a practical joke video that flashes a scary zombie-like face.

Violence: SOME SPOILERS: We see a person's cell phone video of a man pushing a teen waiting in line at a movie theater. He keeps pushing him and then the teen runs off, but the man tackles and punches him. It's shown with very shaky camerawork and not much detail. We later hear the man broke the teen's jaw; We hear that a man had killed a teen and put their body in suitcases (or something like that?) and shot himself, but we don't see any of these actions; While on the phone, David smacks the wall in frustration; A man grabs another man by the face and neck and shoves him into some cabinets; We see an abandoned car being pulled out of a lake; We hear about a person falling off a cliff into a ravine. Disclaimer: All reviews are based solely on the opinions of the reviewer. Most reviews are rated on how the reviewer enjoyed the film overall, not exclusively on content. However, if the content really affects the reviewer's opinion and experience of the film, it will definitely affect the reviewer's overall rating.