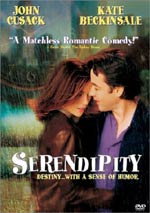 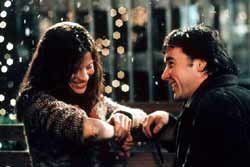 Jonathan (John Cusack) and Sara (Kate Beckinsale) meet by chance one day shopping for each other's mates 5 days before Christmas. They decide to spend the day together and share a romantic and fun evening that leaves Jonathan begging for Sara's number. Sara, who believes heavily in fate and destiny tests their fate in several ways, including burying her number in a book and selling it to a used book shop. If Jonathan was meant to find it, he would. Years pass, and the two haven't seen each other since that day, with both scheduled to marry other people in a close time frame. Will they meet up again?

I loved this movie. Although it's frustrating cause I know after watching it they could have more than easily edited it to a PG film, but the characters were all very likeable and the chemistry between Cusack and Beckinsale was perfect. While events sometimes became frustrating, this was balanced out nicely by plenty of humor and light-hearted moments. But of course, good ole "reliable" Hollywood must mess up a good movie with even the smallest or shortest occurrences of objectionable content.

Before I go into detail about content, however, I just want to touch a little more on the story and overall presentation and feel of the film. The thing that made this movie work so well, was pretty much how sweet and often innocent the film presented itself. Unfortunately the main characters do live with each others' respectable fiancés before being married, which although is acceptable in our culture these days, isn't by Christian moral standards. When the main characters aren't providing humorous or sweet moments, their separate best friends aid in lightening the mood and generating a chuckle from the audience. And although some may find the whole 'fate' plot ridiculous or maybe even offensive, it came across as simply a sweet romantic story and not a soapbox for any new age thinking. While Sara's best friend works for a new age shop, in a conversation with Sara she reveals to her that she finds it to be all ridiculous herself. God was only mentioned once in the film, used in a positive note through the popular phrase, "when God closes a door, He opens a window." 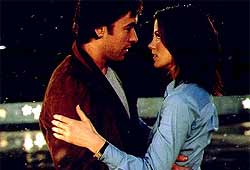 Content, overall, isn't as bad as most current romantic films. There's a scene of sexuality when two guys accidentally see a couple having sex through a window of their house. The scene, although short, does show the couple from the torso up with no explicit nudity, but we do see their facial expressions and a little movement. The filmmakers clearly could have and should have left that out of the film and substituted and alternate sequence just as or more significant (yes, it actually has significance, but it's ridiculous to include). Language is moderate for a PG-13 film with 6 "s" words, a few uses of blasphemy and several other colorful phrases. When the swearing and sex come into the film, it just doesn't fit with the overall delivery of the film. There are a few other sexual references in dialog, but nothing really explicit. I suggest using caution before seeing this film. Other than these offensive instances, it's an excellent movie, but the content does indeed hinder its overall outcome.

In closing, I found the movie to be a good fun date film. It doesn't really take itself as seriously as most films of this genre do (like "Notting Hill" or "Someone Like You"). The film also successfully shows that you don't have to show sex scenes between the main characters to give off a romantic feeling or show that the characters love each other. However, when the physical is introduced into such films, it just taints and renders the film with a filthy feel where sinful lust is portrayed as opposed to a more innocent love. (Do we really need to see sex in the movies? And how many times are these couples married? Think about it...)

Overall, I really enjoyed this movie. It does have its moments of objectionable material, which keeps me from being able to completely recommend the film. It's a shame, too, because with a little editing, it could have been spectacular. Please read all the content details carefully. - John DiBiase (reviewed: 10/7/01)

Sex/Nudity: Aside from some minor sexual-related dialog, but nothing really explicit, there's a scene of sexuality when two guys accidentally see a couple having sex through the front window of their house. The scene, although short, does show the couple from the torso up with no explicit nudity, but we do see their facial expressions and a little movement. We see that they're on a chair and we mainly see the man's bare back and what looks like the woman's legs around him and her reactions. We also see him put her panties on his head (but there is no nudity).

Alcohol/Drugs: Some people have drinks and champagne during the film.

Violence: Nothing worth mentioning. Disclaimer: All reviews are based solely on the opinions of the reviewer. Most reviews are rated on how the reviewer enjoyed the film overall, not exclusively on content. However, if the content really affects the reviewer's opinion and experience of the film, it will definitely affect the reviewer's overall rating.