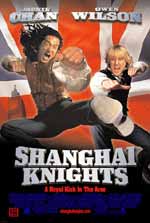 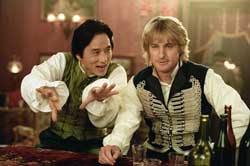 When a Chinese rebel murder's Chon's estranged father and escapes to England, Chon and Roy make their way to London with revenge on their minds. Chon's sister, Lin, has the same idea and uncovers a worldwide conspiracy to murder the royal family but almost no one will believe her. With the help of a kindly Scotland Yard inspector and a 10-year old street urchin, the acrobatic Chon gives Victorian Britain a kick in the pants as he attempts to avenge his father's death and keep the romance-minded Roy away from his sister.

Ah sequels. Surprisingly, the idea for a sequel to 2000's Shanghai Noon was thought of before the release of Noon. While Shanghai Noon took place almost entirely in the old west, Shanghai Knights is set almost entirely in late 1880's London, England. While Jackie's character Chon was the fish-out-of-water in the first film, both his and Owen's Roy O'Bannan are both out of place in Knights. Naturally, hilarity ensues. But is it executed to its fullest potential? Well, yes and no.

Shanghai Knights is a pleasing follow up to the fun and unique Noon, but doesn't come away without a mild case of sequelitis. The strongest points of Knights lies within the clever and highly enjoyable to watch action sequences brilliantly choreographed by Jackie Chan himself. The most notable ones include a brawl inside a personal library (complete with a ladder on wheels), a scuffle in a street market, and a run-in involving a classic hotel revolving door, among a few other shorter moments. The biggest problems also came along with some of these fight scenes. Where director Dobkin tripped up the worst was when silly sounds and ragtime music accompanied the revolving door sequence and an over-exaggerated (yet still fun for the most part) fight with umbrellas to the tune of "Singing in the Rain" took the film to a cheesey level that Noon never dared to tread (which was Tom Dey's directorial work the first time around). While just a few scenes in Noon utilized "cooler" tunes from that of ZZ Top and Aerosmith to enhance a bar fight and getaway while still holding onto its integrity, the goofy -- and way too frequently used -- music overpowered some of the amazing and fun stunts (not to mention a few embarrassingly silly moments during the street market scene) here. The music chosen just didn't fit and often detracted from the otherwise brilliant sequences. Oddly, about half-way through the film, as the momentum continued to build, Knights' overall feel changed back to include a lot of the funny and charming moments that made Noon as wonderful to watch as it was. 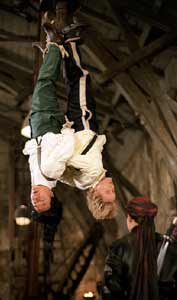 Fann Wong was a great addition to the cast as Chon's sister and it was great to see her kick plenty of butt alongside Chon and Roy. Another character that wasn't necessary but didn't overstay his welcome as badly as he could have was the 10-year-old street boy Charlie. While irritating when he was meant to be at times, and was around more often than I would have liked, he works well enough with the story to not hinder the overall outcome of the film. The villains were worthy adversaries to Chon and Roy and we even get to see Lin have a humorous run-in with a famous British villain. It was also nice to see Roy and Chon together for almost the entire movie while in Noon we had to wait awhile before the two teamed up.

Content-wise, Knights resorts to one-too-many sexually-related comments and moments. Noon touched on the subject here and there but hardly stayed on it too long. Unfortunately Knights relies on the subject matter way too often for jokes and laughs that it sometimes becomes uncomfortable. In the blood and action violence category, the film is chock-full of violence but never becomes explicitly graphic. The only instance we see any blood is a minimal amount dried on a knife and a tiny bit on Chon's shirt after being cut there.

In summary, I found the movie enjoyable despite its occasional schizophrenic nature with being goofy at times and true to its predecessor at others (which thankfully was more often the case) -- not to mention the unnecessary amount of sensual material in the film. It was really great seeing Owen Wilson and Jackie Chan back together in their roles and without it being a complete rehashing of the first film. If you enjoyed the first film and can stomach the moderate sensuality, you'll want to check out this film. However, you may want to leave the kids at home.

Sex/Nudity: A surprising amount. When we first see Roy, he's flirting with a couple girls who slip their hotel keys into his lap. When Chon shows up, he gives him one of the rooms and insists he sleep with one of them (related dialog is used). Nothing is shown, but when Roy walks in on Chon later on, we hear the sounds of a bed bouncing and see Chon on his back with the woman on her back on top of him, but we quickly learn that he's cracking her back and not doing anything sexual. Roy uses some innuendo to hint to Chon that all of the travelling on a saddle may have impaired his ability to have children. Roy gives a deck of cards to Lin that have drawings of naked women on them. At a fancy English buffet, a man behind a table of food asks Roy if he wants a food that to him (and the audience) sounds like "Spot a d*ck." Roy makes a related comment before realizing he's referring to a dish. Later in the film he refers to it as "spotted d*ck." We see the top card but the woman is positioned to cover up any details. Roy wakes up and finds himself in a bed with with beautiful women in low-cut attire surrounding him. Lin suddenly emerges from the group of women and crawls up to Roy and licks his face sensually. She then makes the sound of a sheep and Roy awakens to real life and finds a sheep next to him licking his face. While at an inn filled with prostitutes, a girl knocks on Roy's door and offers her services, but he turns her down insisting he's changed but would normally have "bedded her in a minute." To make up for something he did, Chon fills Roy's room with prostitutes. In an effort to cheer him up, he initiates a pillow fight among the group that has the guys in their long johns. When Lin walks into the room, we see that the guys are now participating in the fight naked (we see them in a head, shoulders, and chest shot). When the remember they're naked, they grab pillows to cover their crotches and we see them in a full-body shot with pillows over their crotches.

Alcohol/Drugs: Several instances show people drinking. In one scene, Roy gets drunk at a bar.

Blood/Gore: We see a knife with a little bit of dried blood on it. Chon receives a few sword wounds to his arms and we see a tiny bit of blood on his sleeves where he was cut.

Violence: Oodles of kung-fu violence, mostly non-lethal. A man is killed when stabbed (we don't see anything explicit). A man falls to his death. Other non-lethal, nongraphic violence is also present. Disclaimer: All reviews are based solely on the opinions of the reviewer. Most reviews are rated on how the reviewer enjoyed the film overall, not exclusively on content. However, if the content really affects the reviewer's opinion and experience of the film, it will definitely affect the reviewer's overall rating.