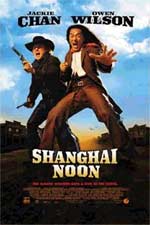 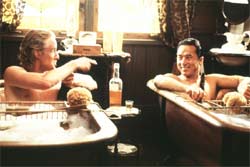 When the princess (Lucy Liu) of the Forbidden City in China is kidnapped, Imperial Guard, Chon Wang (Jackie Chan) accompanies his fellow guards to rescue her. On his way, the train he is on is robbed by thief, Roy O'Bannan (Owen Wilson) and his gang. Chon gets separated from his team and is left to try to find the princess on his own. When he continues to run into Roy along the way, the two eventually team up to rescue the princess and also have to escape a crooked, gun-happy town sheriff in the process.

Most reviewers are comparing Shanghai Noon to Jackie Chan's last American film, 1998's Rush Hour because of the similarities in plot and format. It's even been said that the idea for Shanghai was derived during the making of Rush Hour. I'll attempt to be different and not even mention Rush Hour in my review. I won't mention that both films have Jackie rescuing a Chinese girl, and that both feature unusual but comical pair-ups, and both are very funny. I won't mention that. :) What I will mention, however, is how great this movie is-- but how much better it could have been if they had just cleared off a few... tumbleweeds first.

The match of Owen Wilson (Armageddon, The Haunting), and comedic, martial arts master Jackie Chan is ingenious. Wilson has the best lines and compliments the comical acrobatic feats of Chan. The humor is quite continuous and you don't feel like you're watching a cheap rip-off of other comedies 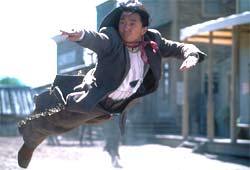 and the quality of the humor immediately ranks this movies as one of the best comedies of the year. It's unique, it's fun, it's highly enjoyable. But, it has it wounds. Like most PG-13 movies these days, you can't get away with a good movie. You must be hit with unnecessary material as well.

For example, the language isn't too bad, but it is quite unnecessary with at least 7 "s" words, with at least 3 included in the outtakes. I understand you can get away with this in a PG-13, but must you put it in?! The violence is high, but the blood/gore is at an extreme and pleasant low. Although we ever so briefly see some blood when Chon uses a sheriff's badge as a throwing star and it hits someone's hand, and we later see a cut on Chon's arm, the suprisingly most intensely violent moment includes no blood at all. The villain, Lo Fong, in a quick flash grabs a man's throat and squeezes it. Although, 2 people have described it as such, it also looks as though, after he easts and oyster, that he thrusted the shell into the man's throat. But it happens so fast and is obscured, that it is hard to tell. All you hear is the sound effect and the man's reaction. In another scene, some indians use a peace pipe with and unknown drug to cause Chon to laugh hysterically and pass out, and he wakes up the next morning with a new indian wife he didn't know he was given. Played for laughs, I found that it didn't really need to be in the movie. Another scene, Roy and Chon get really drunk, and although nothing they do as a result of it is bad, it's played for laughs as well. On the good side of it, they do show that Chon's senses have become dulled and that being drunk only hurt them and didn't help.

There is a bit of sensuality in it. Roy is scene with some prostitutes, but no sexual encounters are seen. In one scene, he's lying on a bed (in long johns) with several women (who are fully clothed, but wearing some semi-revealing clothing) and then it cuts to him trapped buried in the ground left for dead. Only 1 or 2 comments with double meaning or suggestiveness are made, and thankfully not more explicit content was included.

In summary, the movie was really good. I was disappointed with some of the content-- the cursing and the sensuality, but with that aside, the movie was great. It's a 5 star movie, but the unnecessary content drops my rating a whole star to acquire a 4 out of 5.

Sex/Nudity: A few minor suggestive comments or double meanings. After the indians drug Chon, he awakes the next morning next to an indian woman (now his wife), suggesting they slept together, but he didn't remember anything. We see Roy with some prostitutes a couple times, but never any sexual encounters are seen (in one scene we see him lying on a bed in his long johns and a couple prostitutes are pampering him. One kisses his ear and then bites it and he realizes it was a dream).

Alcohol/Drugs: Some people have drinks, and in one scene, we see Roy and Chon get very drunk. Also, Chon's horse takes a bottle of booze and chugs it. In one scene, some indians give Chon a peace pipe to make him stop talking, and it drugs him so he passes out.

Blood/Gore: Although neither bloody nor gory, there is a lot of martial art violence. In one scene, we see Lo Fong shove an oyster shell into a man's throat. We don't see the actual impact, but we hear it and see the man's facial expression. We very briefly see some blood when a sheriff's badge gets stuck in a man's hand. There's some blood on Chon's arm when he's cut by a sword.

Violence: A man is violently choked to death, An explosion, Some gun shooting, people being punched, kicked, and Chon uses various objects to defend himself with, including a horseshoe tied to a rope, his long ponytail, and antlers. Disclaimer: All reviews are based solely on the opinions of the reviewer. Most reviews are rated on how the reviewer enjoyed the film overall, not exclusively on content. However, if the content really affects the reviewer's opinion and experience of the film, it will definitely affect the reviewer's overall rating.