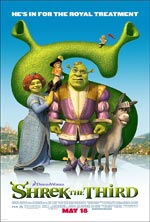 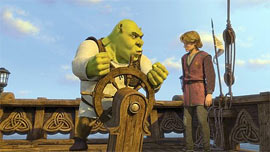 Shrek The Third finds Shrek and Fiona reluctantly reigning over Far Far Away. But if they can find the heir to the throne and bring him back, they can return to their swamp. While Shrek, Donkey and Puss in Boots are in search of the heir, Fiona holds off a coup d'etat by Prince Charming. (from MovieWeb.com)

It's a pretty big challenge to try to top a sequel like Shrek 2, which was better in a lot of ways than its predecessor. Shrek The Third is a valiant effort, however, bringing a new adventure to the table for our heroes Shrek, Fiona, Donkey, and Puss In Boots. This time around, Shrek sets out to find an heir to the Far Far Away throne, a young teenage version of the legendary would-be King Arthur. And since Prince Charming survived the conflicts of the previous sequel, the evil pretty boy returns as the chief villain for Shrek The Third.

Shrek The Third is the first in the potentially extensive franchise to not feature director Andrew Adamson at the helm. Newcomers to the Shrek director's chair Chris Miller & Raman Hui do well to continue the very look and feel that the first two films established. The biggest noticeable difference with The Third, however, is a decreased presence of Donkey. The relationship between the titular ogre and the talkative sidekick was a staple of the first film and even much of the second film. Puss In Boots is given significantly greater screen time, and also seems like more of a partner-in-crime with Donkey. Sadly, giving Donkey less to do as well as another partner aside from Shrek is pretty much the mistake that the creators of Seinfeld made when they would give Kramer a sidekick - it just seems to detract from the character's impact and overall essence. Certain characters thrive in a specific setting and watering down the shtick between Donkey and Shrek seems foolish. But The Third progresses the story well, wrapping up a tale that works perfectly as a trilogy, as this film picks up quite soon after the events at the end of Shrek 2.

The introduction of Arthur to the story is a unique idea. Oddly enough, showing Arthur as a teen and calling him Artie may not have been the best decision, but it ends up working perfectly with the film's theme. While I never would have ever dreamt of *NYSNC personality Justin Timberlake in such a role, his youthful expression ended up being perfect for the somewhat bratty "Artie." And through the three films we get to watch Shrek himself go through the character development from callous ogre to a lovable, albeit still rough-around-the-edges, family man. There's an added humanity to watching the moody ogre struggle with the fears of raising children after learning the news of Fiona's pregnancy. With "Artie" being of a young age, we see Shrek switch into parental mode, which is a big change for the character. The relationship actually gives the film an almost preachy feel about being all you can be and having faith in yourself. In the end, it remains a redeemable message that will hit home for viewers of any age. 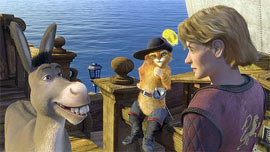 The adult content is greatly subdued the third time around. Although there are some questionable comments, it's overall less than the previous films, with no objectionable language being included this time around (aside from a "kick me" sort of sign that's pinner on Donkey's tail and reads "I S*ck-eth"). The violence, however, is pretty substantial, with villains wreaking havoc on the land of Far Far Away, and Charming fighting a bit dirty at times. Also, the spoof jokes are surprisingly less in this film, while the expected absurd situations and jabs at classic fairy tales still remain - and have become expected. Every character that has been touched on in the past two installments are expanded on a bit here, which actually may present a bit of a problem. With each character - from Cinderella, Snow White, and Sleeping Beauty to Captain Hook, the Headless Horseman, and the evil trees, all getting more focus, Shrek The Third almost suffers the same problem Spider-Man 3 had with featuring too many villains. In the end, however, the writing team get some wonderful jokes in there (having all the fairy tale women throw a baby shower for Fiona is priceless), and the Gingerbread Man and Pinocchio once again get some of the film's best laughs.

When all is said and done, Shrek The Third is a fine sequel, but cannot top either that came before it. It's often just as fun and imaginative, but it feels like something is missing by the time the credits have rolled by. Whether or not it's due to the lack of Adamson's directorial touches or even just less of that signature chemistry between Shrek and Donkey, Shrek The Third just doesn't deliver in quite the way that Shrek 2 did. Some gut-busting, laugh-out-loud moments are definitely included, so Shrek The Third is still an enjoyable time at the movies.

Although it's just a tad milder in crude or vulgar comments than the first two, this film still has some pretty violent or dark moments to concern parents when involving the little ones. It's nice to see the film take the more mild route, but it wouldn't hurt omitting stuff like a brief shot of the top of Shrek's derriere. I'm pretty confident that's not needed. All in all, Shrek The Third fits right in pretty well with the others and is just as much fun, even if it isn't quite as good as them. While I can't see how the story can be stretched much further with the way it feels pretty wrapped up by film's end, if the filmmakers can keep churning out the witty fairy tale fun, we'll keep filling the theater seats. But I'd rather see it end on a high note than wear out its welcome.

Sex/Nudity: Donkey pulls a bed sheet off of Shrek and we see his belly and feet (apparently he's naked) and Donkey acts shocked and tells him he needs pajamas; We briefly see the top of Shrek's bare butt as he apparently stands in front of an auditorium of children during a nightmare he's having; Doris makes a comment about Charming making her feel "hotter than July;" to signify independence, we see the princesses burning a bra; Doris shows some leg to distract a guard; A restaurant is pillaged and the name changed to "Hooters" and we see a bunch of men cheerfully running inside

Alcohol/Drugs: We see a few characters having drinks including some characters in a pub and Charming orders a round of Fuzzy Navels for everyone (we briefly see him sipping some through a straw); We see a medieval version of an old van at a high school and the door pops open, spilling out smoke. Two kids, acting high, comment on using frankincense

Blood/Gore: A geeky high school kid gets a sudden bloody nose; A baby ogre spews an intense amount of vomit out of a baby carriage onto Shrek during a nightmare; We see a tiny bit of vomit land on Fiona's mother from a baby ogre

Violence: Mostly comedic violence, including accidental catastrophes having a domino effect and resulting in an auditorium catching on fire; Puss and Donkey smack and poke Shrek to "prove" he's wearing a costume to a guard; A barechested man is struck with an arrow in the shoulder (played for laughs); Shrek tries to knight a man and we see him motion a sword downward, out of sight and hear a man groan and Shrek lifts his hand away and the sword holds its position (to signify he accidentally stabbed the man - which we do not see); Fairytale villains attack the castle, causing a lot of damage; We're made to think a character is stabbed with a sword and they fall to the ground, but we see they're ok and not stabbed at all; A large tower falls on a person, possibly killing them; A man holds a knife to another's throat; There are all kinds of punching and kicking related violence; We see the Frog king dying and he gags and wheezes a lot (played for laughs) with one moment seemingly like he was dead as a fly buzzes out and lands on his eyeball; Shrek tries to launch a ship and pushes it prematurely, throwing a bottle at it which accidentally causes a hole, sinking it in a burst of flames; A ship accidentally crash lands on an island; Lancelot knocks Arthur off his horse; and other comedic violence Disclaimer: All reviews are based solely on the opinions of the reviewer. Most reviews are rated on how the reviewer enjoyed the film overall, not exclusively on content. However, if the content really affects the reviewer's opinion and experience of the film, it will definitely affect the reviewer's overall rating.