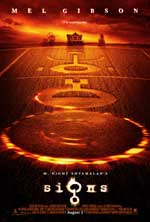 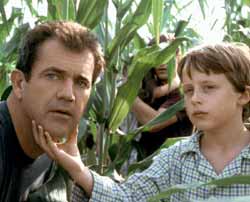 Graham Hess (Mel Gibson) is a former reverend who lives with his brother Merrill (Joaquin Phoenix) and two children Morgan and Bo on a farm in Bucks County, Pennsylvania. Following the accidental death of his wife, Graham left his congregation and lost hope in the very things he stood for as a pastor. Sixth months after her untimely death, mysterious formations appear one morning in Graham's corn field. The unexplainable crop circles cause paranoia to grip him and his family which only worsens as the circles begin appearing in fields all across the globe. As bizarre events begin to unfold, Graham's faith is tested and he must finally come to grips with the loss of his wife.

Director M. Night Shyamalan first wowed audiences with his second little production of his career, 1999's The Sixth Sense. In 2000, he followed the film up with the widely disappointing yet artistically respectable Unbreakable. In 2002, Shyamalan offers up a new creep show in Signs, a film based on the mysterious occurrences of crop circles. The number one problem with Unbreakable wasn't exactly the film itself, but the way it was advertised. Audiences were lead to believe it was simply about a man who is the sole survivor of a devastating train wreck who makes it out without a scratch. What the truth was, was that Bruce Willis's character was struggling to find himself through that circumstance while a crazed man tries to make him believe that Willis is a superhero and he is the villain. A good story, yes. What the public was expecting? No!

For some people, the same is true with 2002's Signs. For those who have seen the trailer or ads for Shyamalan's fourth and newest film (third notable one, his debut was 1998's Wide Awake), Signs can be expected to be an action-packed edge-of-your-seat fright fest. However, this isn't the case. Although it's not super far off as Unbreakable was, Signs digs considerably deeper than its horror surface. What the audience encounters is not only a movie that will make them jump out of their seats a few times, but they're also faced with the inner spiritual struggles of Gibson's character. And surprisingly enough, this movie is funnier than a lot of intended comedies (and not accidentally, either).

The film has the artistic Shyamalan flavor he gave his two previous films but despite the excessive dark elements of those films, the comedic relief of Signs actually helps to considerably lighten the mood. The catalyst of this, most of the time, is actually found in Joaquin Phoenix's character. Shyamalan does a fantastic job of fleshing out each character in the film, but has a lot of help doing this by pacing 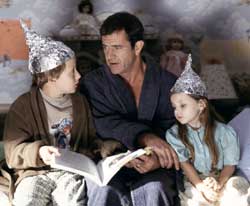 the film just right and focusing almost the entire film on the four essential characters. If Signs isn't causing you to look over your shoulder or helps you to develop a new fear of corn fields, it's pulling at your heart strings and liable to jerk a few tears in a natural way without being forced. Gibson does an excellent job in his portrayal of the very human Graham Hess who struggles with believing God is merciful or even cares about him or his family. As a Christian, this is one of the more heart-wrenching aspects to Signs as we can understand his pains and fears.

Content-wise the movie fares surprisingly well. Just a handful of swearing is present including about three "s" words and several other colorful words. Violence is minimal with the worst being a brief shot of a barbecue grill fork sticking out of a dead animal (with just a tiny bit of blood). Shyamalan kept the film relatively tame and left plenty to the imagination. If you're a fan of thrillers that don't need to be graphic slasher-fests, Signs is right up your alley. And hey, it's got a good message too.

I was impressed by Signs and I think it just reinforces the fact that M. Night Shyamalan is one of the best and most imaginative writers/directors/producers of our time. A great flick, but you might want to leave the kids home for this one.

Blood/Gore: (Includes Spoilers) We see a tiny bit of blood on an animal and at the end of a barbecue fork that was used to kill it (but we don't see the actual act). We see a small spot of blood on a man's jacket. We see a creature's fingers get cut off with no bloody results. Later wee see that hand with nubs where the digits once were. We see a bloody wound on a creature.

Violence: (Includes Spoilers) We learn of an accident that involves a person being pinned between a pickup truck and a tree, essentially cutting them in half. We later see the upper half of them, but nothing graphic, violent, or bloody is seen. A person accidentally kills an animal (but we don't see the actual act). A man cuts the fingers off of a creature. A man beats a creature with an object. Disclaimer: All reviews are based solely on the opinions of the reviewer. Most reviews are rated on how the reviewer enjoyed the film overall, not exclusively on content. However, if the content really affects the reviewer's opinion and experience of the film, it will definitely affect the reviewer's overall rating.